Late October is a beautiful time to be in New England.  The air is crisp, the leaves are changing colors, and championship season is just around the corner.  The perfect storm of competition from across the Northeast, Goddard Park’s flat 3 mile 5k course, and the fact that all of the athletes are just beginning to round into top form usually conspires to produce some great races and jaw-dropping times. 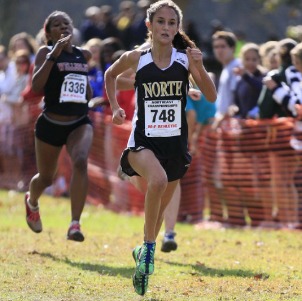 On the girl’s side, less than 70 harriers will toe the line in the Champs race.  Don’t be fooled by the small numbers though- the competition will be fierce and deep.  Individually, North Kingstown RI senior Aisha McAdams will be the hometown favorite.  The top returner from last year’s race, McAdams already put up an impressive performance at Goddard this season with a 3rd place finish (18:58) in the Ocean State Race of Champions.  Even more eye opening was last weekends run, where she finished 17th in the Manhattan Eastern States race at Van Cortland Park.  North Kingstown is currently ranked 3rd in RI, and will be looking to make a statement of Saturday.

McAdam’s will have her hands full every step of the way if she wants to take home a title, as it seems like the entirety of Long Island is showing up this weekend: Sachem East, Northport,St. Anthony’s, East Islip, and Miller Place are all sending teams to Brown.  The girls of Northport are no strangers to the layout; they were the runner-ups in 2011 and the champions in 2010.  Indeed, Northport’s top harrier, junior Brigid Brennan, finished all of a tenth of a second behind McAdams last year.  Joining the two in the front of the field will be Miller Place’s power duo of Tiana and Talia Gueverara, who have put up some blazing times on some seriously tough courses: the pair both broke 20 minutes at Bowdoin Park and 19:30 at Sunken Meadow (Tiana just under 19!).  With the two at the front of the race, Miller Place is a serious title contender.

Representing the Ocean State along with North Kingstown is RI #1 Barrington.  The Barrington girls return everyone from a team that took 3rd place at this race last year, and they look like a serious regional power this year, taking 4th(!) at the Great American Race of Champions, with a blazing 18:57 team average.  Especially impressive is the fact that they did so without placing a single runner in the top 25; instead, their extremely close pack outpaced the competition.  Speaking of #1s, MA #1 Whitman-Hanson will also be lighting up the course at Goddard.  The defending D1 All State champs are once again looking like a real force (just take a look at this workout!).  Also representing the Bay State is Stella Worters, who is looking to continue her breakout season (1st at Martha’s Vineyard in 19:43 and 2nd at Amherst in 18:37). 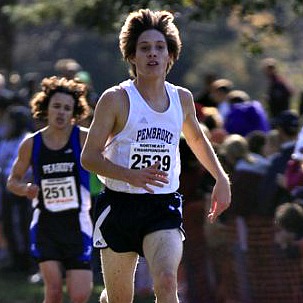 On the boys side, MA #2 Pembroke are returning to Goddard Park in search of their 4th consecutive championship team title.  For the first time, no one lining up for the Titans on Saturday was a member of the ‘09 squad that began their Brown title streak, which begs the question: when will the well run dry?

Maybe not this year.  Juniors Christian Stafford and John Valeri are the 2nd and 3rd fastest returners, putting the Titan’s off to a strong start.  Behind them, Pat Cunningham andBilly Stafford look primed for solid runs.  If one of the “tier two” runners can step up to the plate as 5th man, Pembroke should be tough to beat.

Without a doubt, the team most well positioned to knock Pembroke off of their perch is St Anthony’s NY.  Last, year the two teams had a battle for the ages, with St A’s ultimately finishing a mere two points behind the Titans and boasting a 14 second split.  This year’s team, led by senior Jake Hensler, junior Louis Santelli, and senior Patrick Ginty looks even better than last year’s squad; this past weekend the team finished 6th in the Eastern States Race.  The Friar’s are definitely going to have five guys finish in under 16:30, and any team looking to beat them will almost certainly have to do the same.

The third team that will be gunning for first is also from New York: the oldest school in the country, Collegiate.  Led by senior Ty Buckley, Collegiate took home first place in the Manhattan Invite ‘A’ race last weekend.  Buckley (12:59), Marco Pompilji (13:07), and Liam Buckley (13:15) make for a solid top three, but it remains to be seen if Collegiate has the supporting cast behind them to earn better than bronze.

With Edward Cheserek choosing not to return to Goddard this year after torching the course record last year (14:34!), this year’s individual race should be much closer than year’s past.  The discussion has to begin with senior Scott Carpenter of Lenox HS, who ran 15:29 for 8th last year and is the top returner.  Carpenter has kept his season pretty low key so far, but results from out west indicate that he’s well prepared to run something fast.

Certainly, the aforementioned Christian Stafford is also a threat for the individual title (15:39 last year and 2nd faster returner).  However, the Ocean State has a stake in the race as well- Cumberland’s Trevor Crawley has already gone well under 16 minutes twice this season, running 15:46 at the RI Injury Fund 5k, and then blazing a 15:37 for 2nd at the Maine Festival of Champions.  Unless those races were run on a track, I have to figure he will run even faster at Goddard, and will definitely be out in front.

The other big name in the race is Monsignor Farrell senior Dan Galford.  After opening his season with a 15:59 on the sloppy Paul Short course, Galford got in some practice at VCP, running 12:50 for the win at the Mayor’s Cup.  He followed that performance up with a huge 12th place finish in the Manhattan Eastern States race (12:37!).  I hesitate to call anyone in this race a favorite, but Galford seems to have the season creds.