Kevin was such an important part of our team for 4 years. He has been proving people wrong ever since he was a freshmen, making huge improvements each year. No matter what event we put him in we knew that we were going to get a 100% effort. There probably was not more of a team athlete then Kevin in the entire state. Even after some of his biggest accomplishments he was wondering how other athletes on the team and other teams had finished. He will certainly be missed for not only his athletic ability but also his personality and sportsmanship.  ------ Coach Sheppard 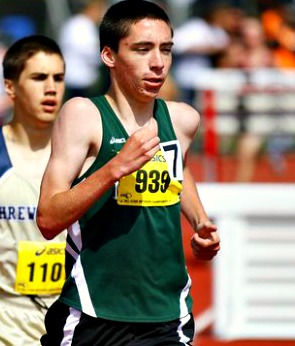 What do you enjoy outside of running?
I like to do a lot of things. I like to play jenga, mini hockey, wiffleball, ping pong, karate, playing with my dogs, badminton, and finally the crane game at Friendly's.
What are you going to miss most about high school running?
Being considered a good runner. At college everyone is animal.
What was your most memorable race?
Outdoor Nationals DMR. I just wanted to stay with Colin Bennie as long as I could because I didn't want to be that guy for the team. After I handed the baton off, my boys did work. Ryan T finally went under 50 seconds for the 400. Joey ran a pr of 1:57 and he was done for the rest of the night after that. Joel got the baton near the leader and I thought we were going to win. Then Joel did what he usually does and took a quick nap in the middle laps. The final lap was redonk and Wesley G made a hard move and Joel wasn't responding. On the final straightway Joel realized that he was in a race and Kevy T'ed the final 50 meters. The DMR was a great way to end my high school career.
Most difficult obstacle?
Joel Hubbard!!!!!!!
Do you have any advice for young runners?
Try different sports because you don't know what your good at if you haven't tried it. Fun fact I played soccer freshman year and tried out for basketball. I thought that I was going to be the next Marquis Daniels, but apparently the coaches disagreed. I was cut on the first day and I cried like the kid from Old Yeller after Old Yeller died. The next day Joelseph Hubbard asked me to do track and I decided to come out. Looking back on it, getting cut from basketball was the best thing for me because that was the day Kevin became Kevy T and the rest is history.
What would you change about high school running?
I would have combined Pembroke and Marshfield XC.
Thank you?
I want to thank my mom, dad, MikeyT24, Tallie, and Ritter. My family was very supportive. Thank you Dan Joyce. Dan worked hard everyday and he was a good role model for me and Joel. He put me under his wing when he could have just pulled a Brett Favre on Aaron Rodgers. Finally, thanks Shepp because you were the best coach ever and you put up with me. Seriously watch out world this guy will be a big time college coach someday. He knew how to handle his athletes by making it fun and productive. Shepp went beyond what was needed as a coach. Also he inspired me to become a gym teacher. Thanks buddy.
Kevin's Profile
Marshfield Dartmouth Relays Jan 6, 2012
Boys D2 MIAA Eastern Division Championships Nov 13, 2011
ACL Boys CC Atlantic Coast League Championships Oct 30, 2011
Tweets by MileSplitMass