Recent performances are always the best indicator of future performance, and with that said, the Division Championships usually provide the first opportunity to see what the top tier teams truly look like.  Rosters begin to stabilize, peak cycles start to take hold, and effort levels are raised by the depth of the field.

All of that holds true if......you had to race hard to qualify for the state meet.  For 90 percent of the teams, that is the case.  The other 10 percent are just so dominant that they didn’t have to run all-out.  Some looked entirely too comfortable blowing away the field, and the thought of them being able to run faster is a frightening.

Every state championship is close because all the best teams have been condensed into two races, but this one might be one for the ages. 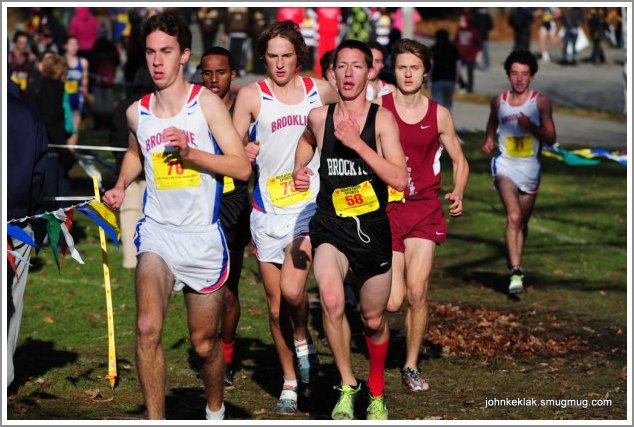 Brookline has been perched atop the Division 1 rankings all year, and although they have suffered a couple of losses to in-state rivals, none have been by a significant margin.  But even that statement has to be qualified.  Mike Glennon is a big picture coach.  He picks his main goal – in the case of his 2011 squad it’s a state title – and then he works backwards to create training and racing plans designed to achieve it.  Glennon is keenly aware that athletes only have a handful of all-out efforts in them per season, so he has worked a rotation in his varsity roster all season long.  His is method of selective racing, coupled with impressive athlete development, should pay dividends Saturday.

The Warriors won the EMass Division 1 race last weekend by eight points over Lowell, but there is speculation that they might have left a little in the tank.  Chernet Sisay finished in 14th that day, and the fact that he was with two teammates indicates that it was by design.  Sisay did the same thing at the Bay State Invitational where the race plan was to gather a pack of teammates and drag them through 4K.  Looking back on it, there may have been a bit of foreshadowing in that race strategy from Bay State.  Whether it was an off day, or it was by design, Sisay will challenge for the individual title and should be considered one of the pre-race favorites.

Lowell appears to be healthy again and the impressive performance of Nathan McCarthy last weekend put them closer to Brookline than some had anticipated.  Don’t get me wrong, there were suppose to be close, but a healthy pack of three up front has renewed their chances of bringing home a title.  Success for them, like many teams, will rest on the shoulders of their 4th and 5th runners.  The gap between their 5th and 6th runner was little too large last week to be truly productive, and if it remains that way, they cannot afford any mishaps with their scoring five.  Lowell is well coached and thrives on pack accountability, so don’t expect it to happen again.

The Central Massachusetts Championships gave us a great team battle, but Jonathan Green looked spectacular as he ran away from a very talented field to win by almost 30 seconds over Collin and Jeremy Bennie of Wachusett.  It’s hard to believe that he wasn’t running all-out with a time of 14:17 at Gardner, but his effort was pivotal in securing the team title by a narrow margin over Nashoba.  St. John’s of Shrewsbury continues to look good, but they always seem to find themselves in very tight team battles.  At Ocean State they finished third by two points; at CMI they won by 2 points; and last week the won by three points.  Winning this way may be torture for their coaches who can only watch from the sideline, but the bright side is that they find a way to get it done.  Saturday should be more of the same and St. John's is accustomed to close races.

The Nashoba trio of Miles Hodge, Reid Sullivan, and Forrest Hangen finished 4-5-6 overall last week at the CMass Championships, but there was a 10 second gap between Hodge and the others.  That gap will need to disappear, or Hodge will need to be firmly entrenched in the lead pack, because being trapped in between groups will not help Nashoba get to the podium. They displayed nice depth last weekend in their second place finish but the increased size of the race could cause problems if that pack is broken-up early.

Amherst handled the Western Massachusetts Championships with relative ease and walked away with the title by 30 points over Ludlow.  The performance was a nice rebound for the team after finishing a disappointing 9th at the Brown Invitational, and it shows that a peak cycle is doing the squad some good.  Amherst might not put anybody in the top 15, but their 30 second gap from last weekend will help tremendously if they can replicate it in the larger field.

Dan Crowley of Ludlow won the WMass individual title by 12 seconds, but then 8 runners finished in the next 7 seconds.  The time span of that pack (17:13-17:20) would have put the group in the top 25 back in the 2009 State Championships on the same course; simply indicating that they had to run fairly hard.  Crowley’s win was a nice addition to a running resume that includes a win at the Great American Cross Country Festival, but he needs to erase the memory of his 23rd place finish at the Brown Invitational. Crowley is tough and champions always have a way of doing that.

The rest of the team battles do not get any easier.  Acton-Boxborough finished third in the EMass Division 1 race behind the impressive performance of James Sullivan (2nd in 15:56).  A-B struggled a bit with depth, but it’s a program that is well versed in championship racing and it would be foolish to count them out.  They will be engaged in an all-out fight with Lincoln-Sudbury, Mansfield, Oliver-Ames, and Whitman-Hanson for a podium spot.  L-S surprised everybody but themselves as they won the EMass Division 2 title by 20 points over Mansfield, and Oliver-Ames edged Whitman-Hanson with their depth 102 to 114 to secure the Division 3 crown.

The race for the individual title includes those mentioned above, plus EMass Division 1 Champion Nick Christansen of Peabody.   Christansen has been taking down course records all season long and the ease with which he broke from the field last week indicates that he is primed and ready to go.  It will be interesting to see who takes over the pacing duties in the first half given the fact that Christansen and Chris Allen of King Philip both like to run from the front.

Joining the front pack will be Marshfield teammates Kevin Thomas and Joel Hubbard who appeared to be out for a tempo run when they went 1-2 in the EMass Division 2 race.  The pair was featured in our Workout of the Week on Monday as they blasted mile repeats in the 4:45 range.  If you thought that workout was impressive, rumor has it that they dipped into the 4:30 range during a similar workout just a few weeks ago.  Coach Sheppard put them back into a work phase before the Workout of the Week was filmed, so their potential to post an impressive time Saturday is definitely on the rise as they begin their taper.

The rest of the front pack should be comprised of Pat Ryan of Whitman-Hanson, Zach Ganshirt of Walpole, Drew Beck of Oliver-Ames, Nat Adams of Lexington, Mike O’Donnell of Methuen, and the Bennie brothers of Wachusett.  All have the talent and potential to shake-up the top 10 and will be hunted by those stuck between the leaders and the main field.

This might be the closest race of the day for a team title.  Pembroke and Bishop Feehan have been ranked 1-2 all season long but have successfully avoided each other until last weekend.  Pembroke escaped with the win 49 to 54 and the Titans appear to be rounding into the post season form that landed them at the 2010 Nike Cross Nationals.  Sophomores Christian Stafford and John Valeri continue to show impressive progression behind the proven system of Coach Zopatti and team leadership of Wes Gallagher.  Their potential is unknown because of their age, but their progression curve this season is nothing short of extraordinary.  They will have to live up to that reputation if they want to hold off Bishop Feehan for a second consecutive week.

Henry Dodge is usually Bishop Feehan’s #1 runner, but last Saturday he was their #5.  Some speculate that Coach Bob L’Homme took a page from the coaching strategies of Brookline……or vice versa?  It appears that the Shamrocks were content with matching up their 2-5 runners with Pembroke and Dodge was sent out to ensure that plan was executed (race video).  All of that is pure speculation, but if - and when- Dodge returns to the front of the squad the team race will really tighten up.

Sandwich has quietly been doing their job all season with one goal in mind; to finish in the top two at the state meet.  This process involved using their depth to survive the dual meet season, pushing the speed work phase of their training to late October, and selectively picking invitationals to test their progress.  The combination seems to be working for the Blue Knights as they qualified in third out of the EMass Division 4 race with a comfortable margin over Wakefield who finished 4th (98 to 155).  Their method all along has been pack running, and the bigger the race the more effective the strategy.  David Allen had a fantastic race last week finishing 5th overall, and his performance pushed their 1-5 gap to an abnormal 1:07.  But the trend is actually helpful because the rest of the team did not run poorly, Allen just ran great.  If he can replicate that performance and the gap can shrink to 45 seconds or under, Sandwich may achieve that goal.  But, they will need Pembroke and Bishop Feehan to beat each other up mid-race for the door to be opened.

The remainder of the team battle will come down to squads with similar profiles to Sandwich.  Newburyport, Whitinsville Christian, Mt. Greylock, Hopedale, and Catherdal of Springfield all finished first or second in their respective division championship meets and will be separated by small margins.  This group will do battle in the trenches where passing a handful of athletes in the final mile may be enough to move your team up a spot.

The individual champion may also win a team championship as Wes Gallagher and Pembroke return to defend their titles from 2010.  But Gallagher found himself surrounded by two tenacious competitors in Stephen Robertson of Wakefield and Mike McConville of Hingham last Saturday.  Gallagher broke away late for the win in 15:50, with Robertson and McConville finishing side by side for 2nd and 3rd, respectively, in 15:54.

The same scenario may unfold this week, except Scott Carpenter of Lenox has the ability to completely change the outcome.  Carpenter blew away the field in the Western Massachusetts Division 2 Championships in a time that landed him on the Northfield Mountain Top 100 (16:47), ahead of some prominent names from the 2009 State Championships.  The accomplishment is part of an impressive season where Carpenter finished 8th at the Brown Invitational (15:29), and won the Berkshire County Cross Country Championships. He will run to win and the others should pay attention.

Thomas Rodger of Whitinsville Christian, Ross Mungeam of Douglas, Paul Maurais of Hopedale, Brendan Sullivan of Foxboro, David Taranto of Burlington, and Matt Cheung of Mt. Greylock will be a few of the athletes that make-up the chase pack fighting for a top 15 finish.  The race may play into the hand of the chase pack if it’s a muddy day and the leaders back off the pace in the first 2K.