Slowly but surely cross country action in Massachusetts and the rest of New England is heating up. Even though it’s still early and quite a few squads are resting top runners, there were plenty of exciting races throughout this past weekend.

At the heart of all of this weekend’s actions was the UMASS Minuteman Invitational. Boston College, University of Vermont, University of Maine, UCONN, Sacred Heart, and Amherst College converged on Saturday at the challenging bucolic course nestled in the UMass Amherst campus. For a few teams this was their first showing of the year and a chance to shake off some of the summer rust. Though for everyone it served as an opportunity to have some fun at a quicker pace and shorter distance (Men 6k, Women 5k).

The women kicked off the day at UMASS and it was all Boston College senior Liv Westphal from the start. Last year, Westphal won this race in 16:58 and went on to finish her season with a 17th place finish at the NCAA DI National Championships. This year, Westphal won in a time of 16:13.2 and beat her closest opponent by 40 seconds. Currently, the Boston College women are ranked #2 in the Northeast Region and they certainly showed their worth on Saturday; they placed all five of their runners in the top ten for a 27-point total. Behind the Lady Eagles in the team scoring were the UCONN women with 41 points. UCONN was led by their senior captain Lauren Sara (Bunnell HS, CT), who ran 16:43.3 and finished second overall. She was closely followed by teammates Emily Durgin (Cheverus HS, ME), who ran 17:10.1 for fourth, and Laura Williamson (Wachusett HS, MA), who placed tenth running 17:40.3.

On the Men’s side, UVM junior Dan Moroney (Suffield HS, CT) took the lead from the gun and never looked back. Moroney crossed the line in a new course record of 18:53.4 and helped secure the team win for UVM over BC. The men of BC were led by the efforts of Tyler Hanson, who scored a second overall finish in 19:09.2. Another factor in UVM’s team victory was freshman Pat Coppinger (Lowell HS, MA), who finished sixth in 19:17.6. The UMass Minuteman finished with a respectable third in the team standings and junior Benjamin Thomas led the team with his third place finish in a time of 19:11.1. Behind Thomas was Tewksbury native Cory Thomas, who made his collegiate cross country debut with a ninth place finish in 19:24.7. Placing fifth overall was the cross-town team and Division III program Amherst College. The men of Amherst were not competing at 100% and their top four crossed the line together in a time of 19:54. The Jeff’s top four included freshman Mohamed Hussein (Northfield Mount Hermon HS, MA), Dan Crowley (Ludlow HS, MA), Jeff Seelaus, and KC Fussell (Monson HS, MA). 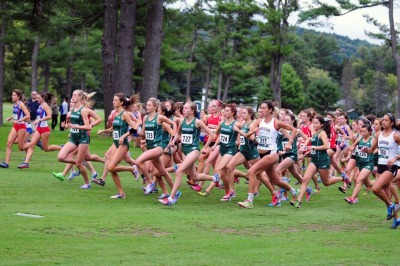 UMass Amherst wasn’t the only place of action for Massachusetts’s collegiate teams this past weekend. Making the journey north, the UMass Lowell River Hawks headed to Hanover, NH for the Dartmouth Invitational on Saturday. Just last year, UMass Lowell made the transition from a Division II to Division I program. A leap like that is no easy feat and requires a lot of patience, hard work, and depth in talent and coaching. On Saturday, it was another day of growing and team building for the River Hawks. Most of the top men for UMass Lowell did not compete, leaving the front pack to freshmen and sub-varsity runners. Leading the way for the team was junior Patrick Ryan (Whitman-Hanson HS, MA) who ran 26:16.8 for the 8k and finished 23rd overall. Nipping right at Ryan’s heels was sophomore Christopher Surpin (Newburyport HS, MA) who finished 24th in 26:19. Three young men making their collegiate debuts at the 8k distance rounded out the top five for UMass Lowell: Tyler Doveno (Nashua South, NH) was 33rdoverall in 26:23.8; John Moddona Valentino (Mansfield HS, MA) was 36th in 26:34; and Timothy Poitras (Dracut HS, MA) ran 26:36 for 38th place. The UMass Lowell men finished fifth overall as a team with 130 points.

Just like the men, the Lady River Hawks rested their top runners, allowing freshmen and sub-varsity runners to compete and gain racing experience. Crossing the line first for UMass Lowell was sophomore Jacqui Solimine (Haverhill HS, MA) who ran 22:36.3 and placed 12th overall. Behind Solimine was freshman Ali Wood (Chelmsford HS, MA) running 23:22.8 to finish in 19th place. Kelsey O’Driscoll and Renee Vigneault(Amesbury HS, MA) placed consecutively, 32nd and 33rd, with times of 22:11.4 and 22:11.7, respectively. Rounding out the top five for the River Hawks was freshman Kathryn Loughnane (North Attleboro HS, MA) in 34th place and a time of 24:39.3.

On Saturday, the Tufts University Jumbos ventured up to Maine for the Bowdoin Invitational. On the women’s side, Tufts junior Audrey Gould (Amherst Regional HS, MA) crossed the finish line first in 18:06.9 and led the Jumbos to a perfect team score of 15. Tufts sophomore Luke O’Connor won the men’s race in a time of 25:39.4. Though right behind him were five Bowdoin runners who secured the 25-30 team victory over Tufts.

This past Saturday, the DIII men and women of Williams College crossed state lines and competed at the RPI Invitational in Saratoga, NY. The Eph men were led by senior Collin Cotton, who finished first overall and covered the 6k course in a time of 18:46. Not far behind Cotton was fellow teammate and junior Bijan Mazaheri (Wellesley HS, MA), who ran 19:01 and placed third overall. Despite their best efforts, the Eph men were beaten by lower-ranked St. Lawrence University with a final score of 39-53. Though there is still ample time to train and build a team for nationals; all that matters in cross county is where a team ends up in late November. The Lady Ephs also finished second as a team to St. Lawrence, with a score of 39 to 53. The top finisher for the Ephs was sophomore Emma Zehner (Choate, CT), who ran 17:37 for fourth place.