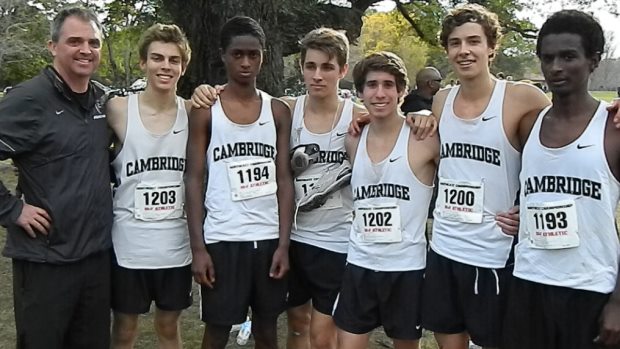 Sophomore Sam Stubbs paced the Falcons with a sixth-place finish. Stubbs, who led his team to the Eastern Division 2 state title last year with an individual triumph, was timed in 15 minutes, 31.7 seconds for the five-kilometer course at Goddard Memorial State Park.

Head coach Scott Cody was not surprised with his squad’s effort against a very good St. Anthony’s team.

“(St. Anthony’s) won last year. We saw how they won the JV race. We said, we’ll see. We’ll give them a run for their money,” Cody said. “We just have five. We don’t have a lot of drop off. They have depth. If any one of our guys is off we are not going to win. Our guys ran really smart and really well. At a mile, we definitely weren’t winning.”

Cody felt the key in his team’s performance was the final mile.

“We went over the course and said, 'Just get out well because when you get to the turn up there (near a half mile) you don’t want to be trapped; just sort of sit there and when you get to two miles just drive it home,'” he recalled. “Especially with 1,000 meters to go with a little rise on the course, I thought that was a strategic place to go hard. The guys really responded. The last 1,000, they ran phenomenal.”

For results, photos and additional stories of the Brown meet, click here.