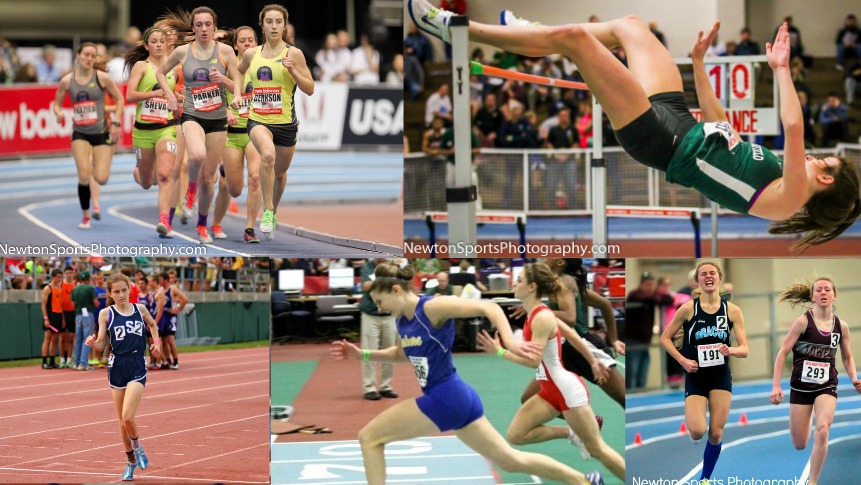 Three returning champions and more than a dozen athletes on the high end of the national rankings.

The girls’ competition of the New England Championship should do its part in electrifying the fans that gather at Boston’s Reggie Lewis Athletic Center on Saturday.

The meet mark of 4 minutes, 54.7 seconds in the mile run would appear to be in jeopardy. Toeing the starting line are six runners that have cracked five minutes this indoor season, including a trio from Connecticut - Wilbur Cross sophomore Danae Rivers, Staples’ sophomore Hannah DeBalsi and Westhill senior Claire Howlett. All three runners were separated by less than a second at their State Open meet on Feb. 17 with Rivers holding off DeBalsi to win the 1,600-meter race at 4:52.29 to the tenth-grader’s 4:52.57. Howlett was timed at 4:53.07.

Even though she is not listed as the top seed, the fastest of the elite runners that are entered this weekend is Classical (RI) senior Maddy Berkson. On Monday night, Berkson captured the event at the Eastern States Championship where she ran a school-record time of 4:50.11. The question is will the Stanford-bound runner have enough left in the tank to contend in the mile? She’s also set to defend her title in the 1,000, held about 30-minutes earlier.

In the 1K, Berkson and future Cardinal teammate Karina Shepard of Dracut (MA) are scheduled in what could be an epic showdown between two of the top middle-distance runners in the country. After winning the MIAA All-State Meet this past Saturday with a personal-best time of 2:48.70 (US #3), Shepard stated that she was unsure if she would compete in the NE meet because of the short time leading to the upcoming New Balance Nationals in mid-March.

“I would love to race (Berkson) just because I think we would get a really awesome time out of it,” said Shepard, after her win at the MIAA meet. “I don’t know if the New England’s is the best to fit with my training for the nationals and stuff. I haven’t decided yet.”

If she does shows up at the starting line, a meet record by either runner is almost a certainty. Berkson won her second straight title last year with the current record of 2:49.32. Cambridge Rindge & Latin (MA) junior Maya Halprin-Adams (2:53.17) and Rham (CT) senior Christine Bendzinski (2:53.28) should be battling for the third spot.

DeBalsi will be looking to win back-to-back crowns this weekend in the two mile, an event she’s the No. 1 seed. As a freshman last year, she won with an outstanding time of 10:39.43. DeBalsi, a runner-up at the Foot Locker Cross-Country Nationals this past fall, ran a PB of 10:22.85 (US #3) to win the CIAC LL Class Championship on Feb. 8. The top four seeds in the race all hail from the Nutmeg State with Simsbury senior Sarah Mattison (10:58.17) and Mercy senior Kaleigh Roberts (10:59.44) the only other runners to dip under 11 minutes this season. Based on her past history, DeBalsi gets the nod for title No. 2 in this race.

One event that would seem to be a lock is the long jump and Lake Region (ME) junior Kate Hall. Back on Dec. 28, Hall almost soared 20 feet, coming an inch short to win the Rhode Island Classic with a distance of 19-11. Her most recent victory in the horizontal leap was a 19-3.75 effort at the Class B Indoor State Championship on Feb. 17 where she beat her closest competitor by more than two feet.  Hall’s nearest rival on Saturday is Hopkinton (MA) senior Jessica Scott, who copped the individual title at the MIAA state meet with a leap of 18-2.5. Marshfield (MA) senior Kelsey Sullivan (18-1.5) and Thornton Academy (ME) junior Tori Daigle (18-0.25) should also finish high.

Hall and Scott are among the top contenders in the 55 dash. Hall is the reigning NE outdoor titlist for the 100. She owns a best of 7.01 for the shorter distance, which she did at the R.I. Classic. She had a convincing win in her specialty at the indoor states where she ran her current seed of 7.05. Scott had her PB of 7.04 with a first-place finish at the All-State Meet. The field is loaded with several other outstanding sprinters that could break the tape such as Nashoba Regional (MA) junior Sarah Militano (7.12), Wilbur Cross (CT) senior Chaslynn Saucier (7.14), Notre Dame-Hingham (MA) senior Amanda Reilly (7.15) and Hope (RI) junior Quashira McIntosh (7.19).

Fresh off a state mark of 39.04 in the 300 at the All-State Meet, Hingham (MA) junior Sierra Irvin will try and continue the momentum this weekend at the NE meet with another big win. Irvin is the top seed in the event. The Bay State has the next two fastest runners in the field with Shrewsbury senior Dominique Hall (39.04) and Notre Dame-Hingham junior Isabella DiMare (40.00), who were 2-3 at the state meet, also scheduled to compete. Hope’s McIntosh should not be overlooked. She was second last year to former Hillhouse (CT) standout Precious Holmes, a national champion at 400 meters. The multiple state titlist from R.I. recently finished fourth in the 200 at the Eastern States Championship. She has a best of 39.38 for the 300, which she did in 2013.

Look for a tight race in the 600. Bishop Guertin (NH) senior Molly McCabe owns the fastest seed at 1:33.49 (US #7). This past Sunday at the USATF New England Championship, McCabe gave herself a good tune-up for the regional meet by placing fifth overall in the 800 with a strong 2:13.88 clocking. She also the won the 800 at the Dartmouth Relays. Urusline Academy (MA) junior Amy Piccolo, who ran 1:33.95 (US #8) at the New Balance Armory Collegiate Invitational a few weeks ago and won her second consecutive state title this past weekend, would have to be considered the favorite. She was second in the race last year as a tenth-grader and has familiarity of the Reggie Lewis Center, considering it’s her “home” track. Chances are this race will be won in the low 1:32 range, a time the two runners are certainly capable of doing considering their past histories. Also deserving consideration for a podium finish are Ursuline Academy senior Marissa Wright, a runner-up (1:35.57, US #14) at the MIAA meet, and Barrington (RI) senior Abby Livingston, who won the R.I. state meet a couple of weeks ago and has a best of 1:33.96 (US #9).

Can DiMare repeat the magic? Just a week after surprising the competition at the state meet with a huge PR of 8.32 in the 55 hurdles, the Notre Dame hurdler has a chance to do it again at the NE meet. Her top competition will come from fellow Massachusetts’ native Ellen DiPietro of Marshfield, who was a runner-up this past weekend at 8.41, Ledyard (CT) senior Chenoa Sebastian, a recent state titlist at 8.42, and North Kingstown (RI) senior and Yale Track Classic winner Maria Bolibruch, who copped her third straight state crown a few weeks ago at 8.42.

Michaela Smith of Newton North (MA) is the No. 1 seed in the shot put based on her winning performance at the MIAA meet where she had an indoor best of 42-0.75. Tori Ebert, the R.I. state champion (PB of 41-6.5) from Exeter/West Greenwich and fellow rival and state runner-up Alva Hicks of Classical (PB of 40-11) are the only other competitors that have exceeded 40 feet this winter.