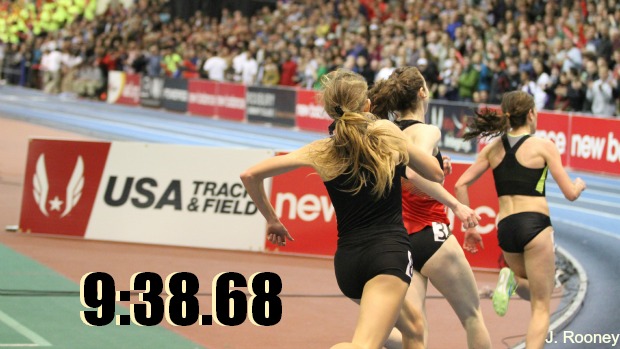 There are few opportunities in sports for high school-aged athletes to run in the same venues as the professionals. Massachusetts basketball players  revel in the fact that they play their sectional finals at the TD Garden, the same parquet on which the Celtics compete. But, imagine that those kids played their high school games right after the Celtics finished. Or, better yet, at halftime. Well, the New Balance Indoor Grand Prix goes a step farther, not only allowing athletes to compete in the same meet as the pros,  but allowing one athlete to even compete against them.

Mary Cain of Bronxville, NY got to know that feeling intimately on Saturday night, competing in the two mile against a field highlighted by Ethiopia's Tirunesh Dibaba, the defending Olympic champion in the 10,000 meters and four-time world champion, as well as the 5000 meter world record holder. Having already shattered the high school 3000 meter record, running 9:02.10 in January at the University of Washington, Cain was no stranger to competition, and has a mentor in Alberto Salazar whose own pedigree and experience as a junior running against the best in the world makes him the perfect teacher in this scenario. Cain, in search of the US junior 2 mile record of Aisling Cuffe (9:54.22) and Melody Fairchild's 9:55.92 indoor best from 1991, surely had the right field to wrestle with.

Dibaba was quickly a non-factor for Cain, running 9:13.17 and taking over the crowd and the field. Cain bided her time through a smooth first 1000 meters, going 3:02, way under the pace for any of these record 2 mile runs. With the crowd simultaneously preoccupied by Dibaba and enamored with her, Cain just ticked off the laps like checks on a checklist, seemingly unfazed by the break-neck pace that the entire field was running. But, something changed around 2000 meters, a split that Cain hit in 6:03. She was no longer racing the ghosts of Cuffe or Fairchild, and no longer concerned with a record whose conclusion was foregone. She was concerned with the professional field around her. Clicking off another 3:03 1K, Cain never appeared strained, never appeared nervous, and never appeared to struggle. As Tara Erdmann led her through a 4:50 mile, Cain was not satisfied with simply running an impressive high school time. She wanted something more.

Those who witnessed her final lap, a 31.5 rocket 200 meters that showed no sign of fatigue from the 9:04.51 3000 meters before it (a distance only run as fast by a high schooler a month earlier, her own 3000 record), will understand what I mean when I say this. Cain exhibited what Salazar must be most proud of- poise. Salazar was known for his toughness, his patience, and his never-say-die finishes (see: Sun, Duel in the) and Cain, we hope the next great name in American distance running, has all of the mental tools that he so often demonstrated. Her arms, her legs, and her face maintained perfect symmetry, and while it appeared easy for her to run 9:38.68 for two miles, we assume it mustn't have been so.

When Canadian Olympian Sheila Reid took control of the pack with 2 laps to go, nobody would have blamed the teenager Cain for fading just a bit. She still would have dominated the record, and the crowd would have pulled her in with a huge ovation. But, all Reid's move did was awaken Cain to something even more special, and that 65 second final quarter must have surprised even her, if not her coach. Something else to chew on, and something the track world wasn't ready to talk about, if not jinx, before this meet, is that Meseret Defar's 9:34.03 World Junior record is now well within her reach.  Where Cain goes from here is anybody's guess. She seems to have every single necessary tool in the shed to compete against the world's best- the physical, the mental, the psychological. We all know how the story goes for many of  these Prep Stars, and we've all watched too many stars fade out too early. But, anyone watching this star in Boston on Saturday night saw something different than many of those who came before her. Cain appears to relish the competition, and has no interest in shying away from it. Our young distance stars were so used to running alone for so long, so coddled into thinking that their time would have to wait, and that their patience would be rewarded over time, that too few of them took risks like the one Cain took this weekend. Unlike those who prefer dominating against lesser fields, shying away from races over their heads, Cain doesn't believe there is such a thing. Mary Cain wants it all, and she knows she can have it now. Why be patient, when you can be the best ever?

The junior festivities got underway with the Girls High School 4x400 meter relay, an event that pits five New York State teams against five New England teams. It appeared early on that Lexington TC was going to run away with it when Robin Gross's blazing lead leg  gave them the pole, a position they held through three legs.  Kellenberg TC of Uniondale, NY had ideas other than letting Lexington run away from them, as Jasmine Fray, a 2:10 half-miler in her own right, used a 55-second anchor split to outlean Camilla Isern, 4:02.14 to 4:02.39. Ursuline TC used Amy Piccolo's anchor speed to close on the leaders, finishing in 3rd in 4:02.59, just ahead of state-mates Mansfield and King Philip in 4th and 5th. 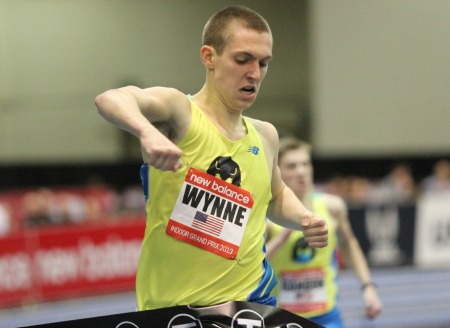 The boys were given a similar task, but a 4x800 would settle the territorial bragging rights. This time, the New York schools separated from the field almost immediately, with Saint A's TC, SJB Elite, and Flyers TC opening with incredible splits well under 2:00. They would continue to battle through every leg, never really changing places, but always staying in contact with one another, and distancing themselves from the rest of a strong field. St. A's never really took on a challenge over the final leg, winning with an impressive time of 7:51.98, just ahead of SJB Elite in 7:53.29 and Flyers TC in 7:54.12. In fact, it would be only 5th place that Massachusetts could muster, a strong effort from Lowell TC, thanks in part to a 1:57  anchor split from Pat Coppinger, keeping them ahead of Brookline, despite Sam Burrington's 1:57 anchor split of his own.  These two will almost certainly meet again, with divisionals and All States just around the corner.

In the junior girls one mile, the field stayed packed in for a blazing 72-second quarter mile split, with Raleigh, NC and Duke-bound senior Wesley Frazier taking the lead and dragging Waterville, ME's Bethanie Brown to a comfortable 2:26.5 opening half, putting major real estate between the two of them and the field. Sarah Gillespie of Northwest Catholic in Connecticut made a strong move with 300 meters to go, waking a sleeping giant in Brown, but never allowing Frazier to take notice. Frazier split 33 seconds over her final 200 to take an easy win in 4:48.94, just two seconds from Emily Lipari's meet record, with Brown (4:54.57) outdueling Gillespie (4:54.81) to the line for 2nd and 3rd overall. Frazier's kick looked as smooth as the rest of her race, one in which she simply chopped off 36 second splits as if she was running intervals on her training track. Demonstrating the depth of the field, all 12 runners were under 5:07, and the chase pack was tightly-wound until some furious kicking over the final 200 meters.

The last high school-only race was the junior boys mile, one in which all 12 competitors were chasing Michael Coe's meet record of 4:07.30. Henry Wynne of Westport, CT and Staples High School took the lead with a 29/61 opening quarter, thinning out the field to himself, James Randon of the Middlesex School (MA), local favorite Mike O'Donnell of Methuen, and Rob Napolitano of Red Bank, NJ. As the laps counted down, like an accordion, the field tightened, with Wynne holding his own on the inside, and others joining O'Donnell, Napolitano, and Randon in the chase. Wynne never wavered, using his 1:53 800 speed to bide his time, winding up for an outstanding 62 second final quarter to comfortably outlast the strong field in 4:11.73. Randon held on for 2nd in 4:12.89, Napolitano was 3rd in 4:13.81, and Jay Navin of Saratoga Springs, NY took 4th in 4:15.89, sneaking fast O'Donnell in the final 100 meters.