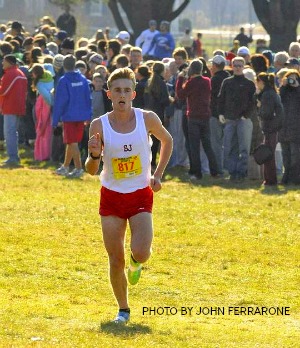 The Superman of Central Mass. cross-country was at his best again yesterday in the Division 1 state championship meet at hilly Northfield Mountain as he conquered the terrain in a runaway course- and All-State-record time of 15:29.7. He obliterated the record of Mansfield’s Ryan Collins, who ran a 15:49 in 2006.  “Training has led up to doing well, for sure,” said Green, who finished the 3.1-mile course in 15:52 just four weeks ago at the Bay State Invitational. “I didn’t know the time I was going to throw down today was going to be that fast.” “I think he used that last week at districts and this week here to make a claim as the best cross-country runner, at least this year, in Massachusetts,” longtime St. John’s coach Raul Laborde said.