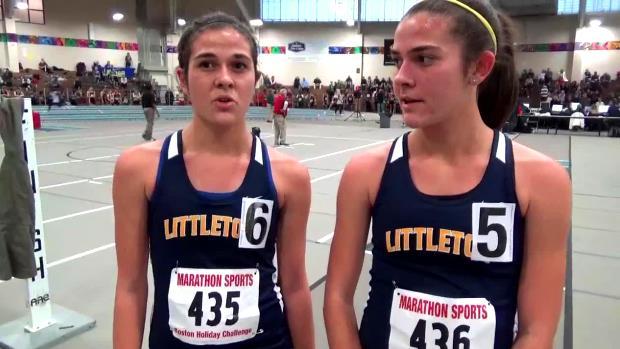 Prior to the indoor season, twin sisters Sarah and Katleyn Roffman have concentrated solely on the middle-distance events.

That might still be the same this winter. But after garnering success in their inaugural cross-country season this year, don't be surprised to see the Littleton High juniors dabbling in the two mile a little more than in the past.

On Saturday, the two talented siblings made a rare appearance in the longer race at the Boston Holiday Challenge. Not surprisingly, it was a successful one, particularly for Sarah.

The recent Division 2 cross-country state titlist claimed the individual title with a convincing 18-second victory at the Reggie Lewis Athletic Center. Roffman crossed the line with a best of 11 minutes, 3.23 seconds. Carley Vetter of Saratoga Springs (NY) was second in 11:21.40. Kaitlyn Roffman secured third in 11:03.23.

"I think we're happy, maybe want to give this (race) another go just to see if we can improve throughout the season," Sarah Roffman said. "We're happy with it as a baseline.".

Two meet records were set at the daylong event, which also featured a Indoor Pentathlon.
Nikki Merrill of Portsmouth (RI) broke her own meet mark in girls' 600m with a PR and nation No. 3 of 1:34.22. In the boys' 4x200m, top seed Fitchburg combined for a record time of 1:31.53.

Wachusett senior Victoria Steffon captured the girls' 55m dash with a time of 7.30. Steffon, who was third at last year's All State Meet and owns a best of 7.24, is hoping to prosper in her final season.

With the graduation of Norton's Brooke-Lynn Williams, the two-time state champion, the short sprint appears to be wide open with a number of athletes capable of winning the individual title, including Steffon.

"I am definitely hoping to do well in postseason," she said. "As long as I keep working hard, I think I will be able to do it."

In the boys' 55m dash, Greater New Bedford's Dejury Amado was the first to break the tape with a time of 6.49. Finishing second was Eugene Meleshkevich of Westborough in 6.59.

Aiden Felty of Innovation Academy continued his rapid progression in the shot this early season by tossing the metal ball to a new PR of 57-2. His effort ranks No. 6 nationally. Less than two weeks ago, Felty had a four-foot PR of 55-5 at the Winter Festival.

Drew Thompson of Fairfield Prep (CT) claimed the mile crown with a time of 4:23.84. Thompson held back with the lead pack until about two laps remaining where he surged to the front and was never seriously challenged the reminder of the way. Finishing second was David Vorbach of Nashua North (NH) at 4:30.72. Winning the unseeded heat, Franklin's Tyler Brogan placed third overall in 4:31.03. Thompson also copped the two mile in 9:27.12.

Saratoga Springs (NY) junior Kelsey Chmiel clocked the nation's No. 1 time in the girls' mile, breaking the tape in 4:54.96. Caroline Fischer of Bishop Guertin was second in 5:05.92.

Chmiel, who was a runner-up at the Nike Cross Nationals earlier this month, is focused on another strong season in the distance events. She's is the defending outdoor national champion for two miles with a 9:59 best for 3,200m.

Manni Peri-Okonny of Wachusetts matched his best in the high jump with a leap of 6-5. Medfield's Noah Garfield was second at 6-2. Wareham's Taylor Gerbig took the girls' high jump at 5-3. Angeline Grabmeier of Hopkinton was second at 5-1.

Fitchburg's Angel Figueroa, the top seed in the 300m, took care of business in his specialty with a winning time of 35.96. Finishing second was Lucas Roberts of Shepherd Hill at 36.25. In the girls' 300m, it was Shepherd Hill's Madison Marsh, who earned gold. She was timed in 42.06. Fitchburg's Hannah Neilon was second at 43.30.

MileSplit MA will have more on the Boston Holiday Challenge coming soon, including race videos, photos and complete results.