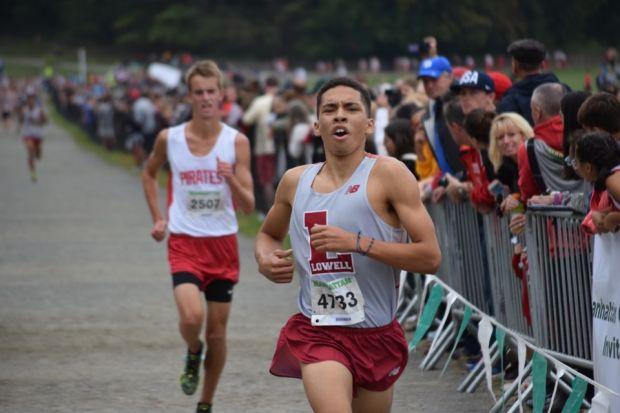 They came, they saw, and they conquered. That was certainly the case on Saturday for the select MA teams and individuals that made the long haul to Van Cortland this weekend for the biggest and best meet in the country!

Under cloudy skies and relatively cool temperatures, the MA#1 Lowell Boys started off the epic day by toeing the line in the Varsity A Race shortly before one o'clock. Though before the varsity squad had a chance to make some noise, the JV Red Raiders set the tone earlier in the morning. Competing in the JV B race, Lowell pummeled their competitors by having Emmanuel Ngoy win in 13:47 and the rest of the team go 2-3-5-9. This easily gave the JV squad a terrific low score of 20 pts and a dominant team average of 14:00.

Given the spectacular show put on by their JV teammates, the Varsity squad knew full well what was expected of them as they toed the line. Getting out well from the gun and having a trio in the lead pack as the race entered the cow paths to the back hills, Lowell appeared in perfect position to take another Varsity Team race title. Around ten minutes later, the race would emerge off the downhill and enter the final long stretch to the finish. If you were at the finish line, you might have thought your eyes were fooling you and perhaps you were spectating at a local dual meet. As after Lowell senior, Chris Polanco finished runner up in 12:45.8, five more Lowell runners would come across the line in a little over thirty seconds after him. This all resulted in Lowell accumulating 28 points and easily walking away with the Varsity A Race title.

It would not be until dusk had fallen and VCP sat quiet after thousands had crossed its paths, when we would know the full extent of Lowell's dominating victory. Though many would expect Eastern Championship Race to boast the best team of the day, given it was comprised of CBA, Fayetteville Manlius, and Don Bosco Prep. The Full Boys Merge would tell a different story, as Lowell took the top spot with their impressive 13:08 team average. Making the day even more special for Massachusetts would the be the team finishing second overall in the merge, St. John's of Shrewsbury.

Words from Our Winners

"We had a fun time in New York and loved the experience, but we went to Manhattan with a mission, which we executed perfectly. This only takes us one step closer to the state meet" -Chris Polanco

" The day before the race all of us were relaxing and enjoying our time. But as soon as it was race day we were all buisness and I'm glad how everything turned out. It was good to see my team compete and see where we are at and how we can get better form the state meet."
- Anthony A-Rod Rodriguez