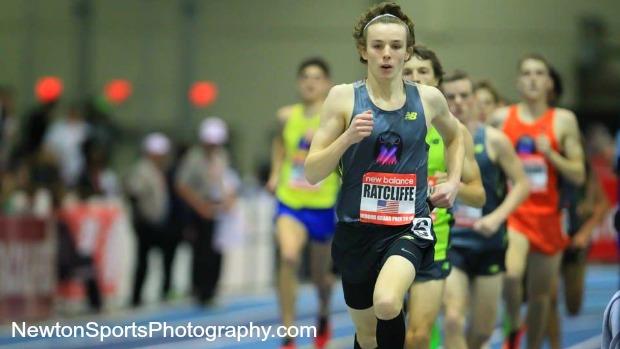 With some of the best runners in the country on the line, Thomas Ratcliffe didn't hesitate to forge to the front of the pack at the start of the Junior Mile this past weekend at the New Balance Grand Prix.

The junior from Concord-Carlisle set the tone for the race by hitting the opening 400 meters in 61 seconds and passing the 800m mark at 2:05. In what turned out to a classic duel at the finish where top-seed Logan Wetzel of Michigan's Saline High edged Jack Salisbury of La Salle Academy in R.I. by .01 with a winning time of 4:08.74, Ratcliffe held his own inside the Reggie Lewis Athletic Center Saturday night by placing fourth with a five-second personal best of 4:10.45.

If there was anyone not familiar with the national-caliber talent of this young runner from Massachusetts, the secret is no more. And guess what? As far as the indoor season goes, he's just getting started.

“The one thing that I'm confronted with is putting down a base because he spends the fall doing soccer," C-C head coach Mary McCabe said. “I'd like to say we care more about outdoor than indoor (track). Really, it's all about outdoor."

“My coach is right," Ratcliffe adds. “I just want to keep improving into outdoor and see where it takes me."

Right now, his prep time for the outdoor track season has taken him to the top tier of the national rankings this winter. Ratcliffe is currently fourth in the country in the two mile and his recent mile at the Grand Prix moved him to No. 6 nationwide.

Keep in mind, this is from a runner that doesn't make headlines on the cross-country trails. Instead, he occupies the first few months of the school year as an outside midfielder for the Concord-Carlisle soccer team. It's a sport he's played since he was a youth and one that he doesn't plan to leave anytime soon, despite his success on the oval. This past fall the Patriots concluded an undefeated season by capturing the Division 2 state title.

“I think soccer actually makes me a better runner," Ratcliffe admits. “I feel fresh for the winter and spring seasons. Next year, we have a great group returning to the team and I'm going to be a co-captain. It's something I look forward to all year; being on a team is something I love."

Ratcliffe's steady climb to elite status began the first time he laced up his racing shoes as a high-schooler, the outdoor season of his freshman year. As a ninth-grader, he ran a best of 4:26.41 for the mile, a time that earned him a fourth-place finish at the MIAA Eastern Division 2 Championships. Less than a week later, he placed seventh at the All State Meet where he clocked a time of 4:27.02.

Ratcliffe's sophomore year was equally impressive. His first indoor season saw him place fourth in the mile at the All State Meet with a time of 4:20.0. He improved on that time substantially during outdoor with a win at Weston Twilight Invitational in May where he ran his previous best of 4:17.82.

“He's a hard-working young man," she said. “He's competitive and willing to put in the time. It's a neat combination."

In addition to his work ethic, one could say that Ratcliffe may have it in his genes, too. For anyone involved in running during the 1970s and 1980s, his name should sound familiar. His dad, Tom Ratcliffe, was a distance runner from Rhode Island who starred at Cumberland High and Brown University. He later excelled at the marathon distance where he posted an all-time best of 2:14:44 at the 1987 World Cup Marathon in Seoul, Korea. The elder Ratcliffe, who also had best of 13:45 for 5K and 28:44 for 10K, is now an agent/manager for elite runners at his company, KIMbia Athletics. The Concord-Carlisle standout's mom, Kim (Ginder), also was a top-class runner and competed for the famed Liberty AC during her younger years.

Thomas Ratcliffe admits he was never pressured into running by his gifted parents, but it did open his eyes about the sport.

“I've been influenced by all the exposure to the professional world of running my dad has given me," he said. “(My parents) didn't push me to run but I had to try fifth-grade cross country after all the Kenyan and Ethiopian athletes had stayed at my house all my life."

With the indoor season past the midway point, Ratcliffe has a few more races to compete in before his attention shifts outdoors. In some ways, he's a little ahead of schedule in terms of his progress.

“The season's been great so far," Ratcliffe said. “I have a great coach and she always tells me to be patient with the process so sooner or later I knew some fast times would come."

In less than two weeks, Ratcliffe will be looking to win his first individual title at the All State Meet on Feb. 21 at the Reggie Lewis facility. He also is contemplating on making the trip to New York City in mid-March for the New Balance Nationals.

But again, it's all about the bigger picture. It's all about reaching his peak when the white stuff's off the ground and the temperature is a little warmer.

“I'm not really thinking about marks right now," Ratcliffe said. “I just want to keep on improving into outdoor and beyond."

It's clear he's on the right track.