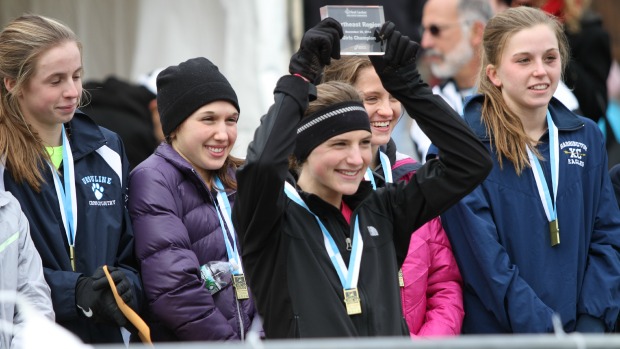 All Erin Dietz had to focus on at Saturday's Foot Locker Northeast Regionals was putting in an all-out effort in the cold and she'd be on her way to San Diego in two weeks.

For the smiling Dietz , her strategy went as planned after all her pre-event concerns surrounding the biggest race of the season never came to fruition.

Dietz, a senior from Bedford H.S., had the sneaking suspicion that the race could possibly be waged in mud and snow in the days leading up to the big event. So when the Div. 2 Mass state champion found the rugged 3.1-mile Van Cortlandt Park layout to be dry and without a hint of snow when she toured the course on Friday, Dietz knew the conditions would be perfect and she'd be able to take full advantage of the quirks (ie. hills) on the fabled stomping grounds in the Bronx.

Dietz was among a pack of 10 runners who stayed together through an opening 5:29 mile before putting her head down and attacking the inclines on the notorious Back Hills to finish a sparkling fifth in 17 minutes and 54.4 second. Dietz stamped her ticket to Balboa Park in San Diego for the national finals on Dec. 13.

Dietz saw to it that there were no snafus along the way and a top-10 finish was never in doubt. Her stellar day also erased the disappointment of finishing out of contention last year after a solid 19th-place showing as a sophomore in 2012.

"I was afraid the course was going to be a mess because it snowed in Massachusetts and it was wet down here," said Dietz. "I was surprised at how great the conditions were. It was perfect. It stayed pretty consistent. I was in the pack and it didn't change too much. I was confident in the hills. I like hills. I really wanted to finish strong. I want to run as strong as I can (in San Diego).

"I won't be doing anything super hard. I want to be fresh for nationals. I really wanted to get there, but you never know how it's going to work out. I'm excited. I was trying to enjoy every minute of it. It's great to run here as a senior. I'm really excited to move on and represent Massachusetts."

Dietz hadn't heard about Massachusetts' showing until a half hour after the finish and was very impressed and happy for her fellow Bay Staters who came up big in such a competitive race. "They're really strong runners too and it's awesome for Massachusetts to do so well as a team," she said.

Keklak made sure she was thoroughly warmed up when she went to the starting line. "I went out just a little too fast," she said. "The hills were tough. I actually saw one girl stop and that's exactly how I felt."

Keklak attacked the downhills and picked the pace up even more after crossing back over the bridge that spans the Henry Hudson Parkway below. "I really started hammering," she said. "The combination of going out fast and picking it up on the downhills, I could feel myself tightening up on the last straightaway. I had kind of a hard time keeping my eyes open. It was a little disappointing because I was so close to qualifying."

Keklak felt the effects of the cold. "This is definitely the coldest it's been for any race all season," she said. "I gave it my all and I can come back next year. Coming here was a great experience because this really is the best of the best of the region. I got a little caught up in the excitement of the race. Next year I'll know just to hang back a little more."

keklaK was impressed with the state's finishes. "Massachusetts is really starting to catch up with other states in the region in terms of competitiveness and ability," she said. "It's nice to have a lot of girls out there pushing hard."

Bryson, who didn't have a bad race all season, relished the chance to compete against the Massachusetts girls from Div. 2. She went out conservatively and began to move up in the Back Hills and finished hard. Bryson was only slightly disappointed she didn't make it into the top 10. She felt a kinship racing with the Massachusetts girls near her.

"I was shooting for top 10 - I think everyone was," said Bryson, who is looking at Div. 3 colleges. "I just wanted to have fun with it. It's a new experience for me. I didn't want to have too high expectations and then be upset if I didn't do as well as I wanted to too. I knew all the Mass girls were competing so I decided to stay with them for as long as I could. It was really cool. I wanted to take the first half of the race easy. I was behind them and then when I went downhill I started picking off people. I never really knew what place I was in."

Next to Dietz, Cullen seemed the happiest of the Massachusetts girls with her finish. "I'm pretty pleased," said Cullen, who had her sights on a top 20 finish. "The first mile felt fast, but I knew it was going to be. I wanted to really start to catch people on the hills. That's where I'm strong. I could see Ariel ahead of me in pink. I wanted to try to stay with her. I don't have a very good kick so I didn't think I'd be able to catch everyone. I think this is a good race to end the season."

Newburyport's Nick Carleo fell victim to a hamstring cramp and was forced to walk briefly in an attempt to loosen it. The two-time Div. 2 State champion still finished a strong 13th in 15:50.6, just five seconds out of 10th place. Alex Ostberg of Darien, CT was an easy winner in 15:17.8. Mass Div. 1 State champion Quinn Cooney of Chelmsford had a poor start, but rebounded in the final mile to take 22nd in 16:03.1.

Carleo was extremely disappointed after running away with the Div. 2 title two weeks ago in Franklin Park. "It went very poorly for me," he said. "I've gotten it before. It went away and I was able to kick, but it was really disappointing. It was the first time I had people around me at the mile. I was fine with it. I wanted to put myself in the top 15, hang on and kick. I was staying relaxed and wanted to take it on the downhill. It just didn't happen the way I wanted to."

Dartmouth-bound Cooney was never able to get back into the flow he wanted after losing ground at the start, but was still in the hunt after passing the mile in 4:48. "It was a tough day for me," he said. "I got a pretty bad start off the line. I tried to work pretty hard to get back up front in that first mile. I had to work around a lot of bodies to get there. From there the hills really got to me. Once I got out of there I was flying, but it was just too late.

"The state meet was definitely my primary goal, but after that I was going for the top 10. It just didn't happen. My last 1,000 (meters) did feel really good though."