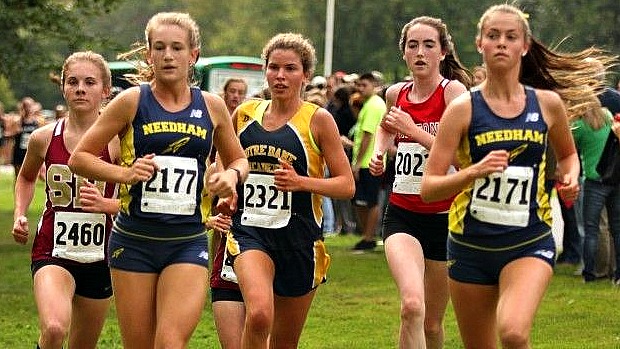 Needham's Sarah Armstrong had long since left her competition behind by the time she reached the 2-mile mark at yesterday's Amherst Invitational. That's when she knew she had to switch gears, put her head down and bull her way up the final hill.

The Rocket junior picked it up on the last incline and sprinted home to a course record of 17 minutes, 57 seconds over the 3.1-mile layout at Hampshire College. Armstrong's teammate Margie Cullen was a strong second in18:16 and the defending Div. 1 state champion Rockets placed four harriers in the top 20 to take the team title with 70 points. Elizabeth Costantino of Notre Dame of Hingham took third in 18:20 as the Cougars were just four points behind Needham with 74. Juleann Shultz of Shepherd Hill was fourth (18:52) and Katie Gobi of Wachusett nailed down fifth (19:05).

It was a strong big-meet opener for Cara Van Cott's talented Needham crew. "Today was about racing as a team," she said. "The girls haven't had a lot of competition yet. We haven't raced Weymouth yet and they're usually our toughest competition. I told them they're defending state champions and to run confidently and agressively. It was a test of our fitness today - to see where we're at. We have a more experienced team this year. They're a little more relaxed, but they have a big target on their back. There's a lot of goals they want to achieve."

Armstrong was relaxed the first mile, but knew her 5:40 wouldn't do if she wanted to get under 18 minutes. "I had to pick it up," she said. "My coach told me to run relaxed the first mile and then I went. I felt strong at 2 miles (11:40), but I was hurting. I just focused really hard. When I came down the final straightaway I saw that it (breaking 18 minutes) was possible so I sprinted as hard as I could. I saw the clock and knew I had to go."

The boys' race was a burner as the top-5 finishers broke 16 minutes and crossed the finish line within eight seconds of each other. Westfield's Ben Doiron overcame a loose shoe and a horrible start to take the win in 15:48. Doiron outsprinted runner-up Jackson Southard of Shrewsbury (15:52) and Connor Evans of Amherst (15:54).

Doiron found himself in the middle of the pack the first half mile, but he never panicked and moved up to second place by the time he reached the mile (4:53). He dueled Danbury's Ryan Ansel (sixth, 16:00) until 2 miles before putting daylight between the two. Doiron felt his legs buckling with 800 meters to go, but had enough left for a hard finish.

"I was debating whether to stop and fix my shoe, but decided against it and it wound up popping back on," said Doiron. "I just tried to stay as relaxed as possible.

Lowell's Anthony Rodriguez was the top local finisher in 10th (16:05) and led Phil Maia's crew to a second-place finish (85 points) behind Danbury, CT (68 points). Northampton was fourth in the team competition with its 90 points and Needham had 158 point for fifth.

Wachusett's Jamie Falla was running for the win in the freshman girls' race and it wasn't even close as she turned the race into a runaway when she surged at the 2-mile mark. The pint-sized Falla averaged 6:18 miles to defeat runner-up Elina Laurent of Concord-Carlisle by 39 seconds in a swift 19:33. Laurent checked in at 20:12 and teammate Gabby Allen took third in 20:21. The Patriots placed their first five runners in the top 15 to easily win the team competition with a stingy 36 points.

Falla tucked in behind Laurent and Allen through a 5:59 opening mile and after Allen dropped back the two front runners pounded on towards the 2-mile mark near the farm. Laurent was a step ahead of Falla at 2 miles (12:25) before the Wachusett talent made her move heading uphill.

Falla was smiling ear to ear after her impressive win.

"On an uphill right by the barn is where I started passing them," said Falla. "I like the uphills. We practice them a lot. I started out trying to follow this girl who was sprinting. But then the two girls (from Concord-Carlisle) passed me and I was in third at the mile.

"My coach told me I could win it and just to follow the bike because I'm not good at remembering courses, even though I walked it twice. I was hoping he'd be right, which he usually is. I knew I had it on the straightaway, but I had no idea where (Laurent) was. I was asking everybody how far back she was the last mile, but they told me not to worry about it and just run."

Keene, NH's Andrew Derry let a pack of Lowell runners take the early pace before surging into the lead to leave the competition behind in the freshman boys' event. Derry clocked a 17:20 to put him well ahead of Lowell's Chris Galarza (17:33) and Stowe, VT's Keegan Loughran (17:41). Lowell outdueled Wachusett in the team scores, 69 to 82.

Derry concentrated on staying near the front early before making a push. "I was expecting the win," he said. "I was going to stay with them (Lowell runners) until there was a half-mile left, but the pace was good (5:15 first mile) and I started putting a gap between us. I made a move on a little bit of an uphill. I knew I had it at two miles."