In what has been historically a state-caliber invitational, the MSTCA Coaches meet did not disappoint. New Bedford’s Irvin Johnson, last year’s New England champion in the 300m hurdles, opened the meet on a high note with a state leading 55.29 after disappointment last week at the Weston Twilight meet. Ben Collelo, the meet record holder, did not make an appearance to challenge him. Irvin went on claim second in the high jump with a leap of 6-4, losing based on misses to Taunton’s Lherief Kenku, who won with a jump of the same height. 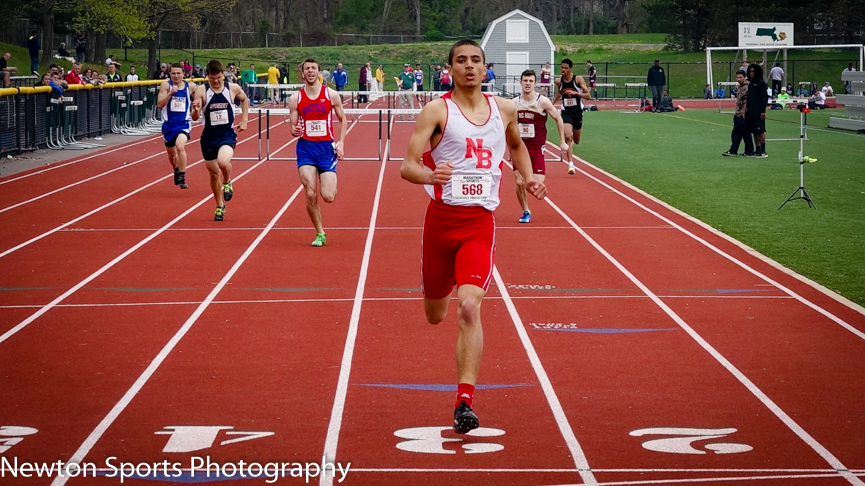 The two-mile, the next event on the track, was won with a breakthrough 9:32.78 by Jay McMahon of Joseph Case HS. He bested his nearest competitor by just under 7 seconds.

Gloucester’s Everest Crawford made his debut in the mile run after coming off of an impressive indoor season. As a junior, he was crowned New England champion; being the only runner in the state to beat US #1 at 1000m, Gabe Montague. Crawford won the mile with a PR of 4:19.45, followed by Swampscott’s Matt Mahoney and Minnechaug’s Russel Wells, who clocked 4:22.69 and 4:23.90 respectively. 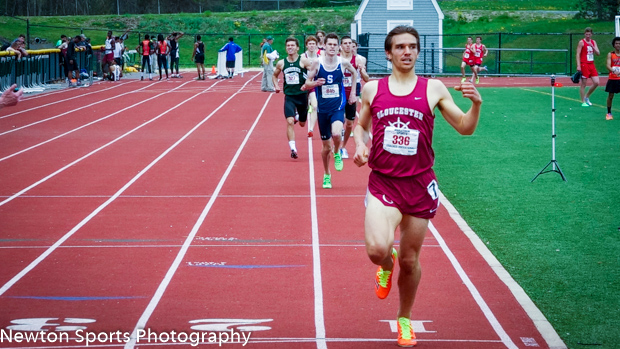 In the 400m, Dartmouth’s Ethan Biron set himself apart from the rest of the field by over a second, nearly tying his season’s best of 48.93, one hundredth off of the state leading time he ran last week at the Greater New Bedford Twilight meeting. Biron is another athlete who had a successful indoor season, finishing second in the All-State 300m only to state record holder Andrew Bolze. 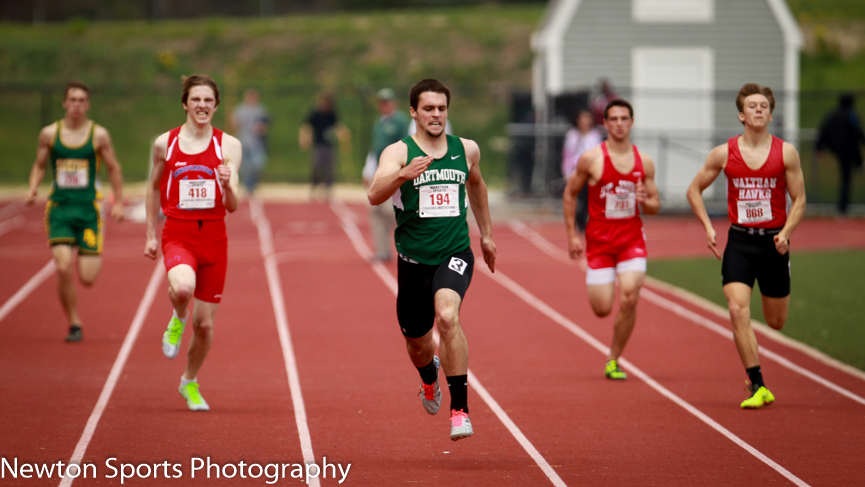 The 100m and 200m dashes saw incredibly fast times. In the prelims, Falmouth’s Craig Green scorched a state-leading 10.85, followed closely by West Springfield’s Mark Pighetti with an 11.01. Green, who ran impressive times as a freshman (10.67), went on to clock the fastest time in the 200 prelims as well with a PR of 21.88, followed by Bridgewater-Raynham’s Abu Ceesay, who ran 22.33 as only a sophomore. Weymouth HS, who fielded an all-state champion 4x200 team indoors, qualified three sprinters for the final as well.

In the final, it was all Green and Ceesay. In a close race, Green pulled away for the win with a new PR and state leading time of 21.88. Ceesay crossed shortly after with a PR and MA #2 time of 22.05, and both certainly went home in cheerful moods. The 100m final was won by WS’s Mark Pighetti, who capitalized on Green’s fatigue from the 200 final to cross in 11.07, slightly slower than his preliminary round time. Jonathan Derulos of Brockton was second with an 11.15, followed by Jimmy O’Brien of Stoneham, with Green fading to a sixth place in 11.50.

The 800m run featured 9 athletes under two minutes. Connor Murphy of St. John’s Shrewsbury won with a PR of 1:56.85. James Garbier of Watertown and Connor Donovan of Oliver Ames took second and third with efforts of 1:57.25 and 1:58.49.

The 110H also proved to be a quick showing, which seems to be the usual situation whenever BC High’s Jordan Samuels and NNHS’s Nick Fofana step into a final together. In the prelims, Samuels posted a 14.81 to easily win his heat, while Fofana qualified second with a 15.14. He was followed by Brandon Thornhill and Deion Raper, from Natick and Brockton who were separated by only .01 at 15.32 and 15.33.  Samuels took the final with a PR run and decisive MA #1 time of 14.42, winning by an impressive margin of 0.4, despite the fact that he clipped nearly every hurdle on his way to victory. Fofana followed with time of 14.81, just a couple hundredths off of his MA #2 seasons best. Raper managed to dip under 15 seconds for the third place and 14.98, while Thornhill improved on his preliminary time to take fourth with 15.25. 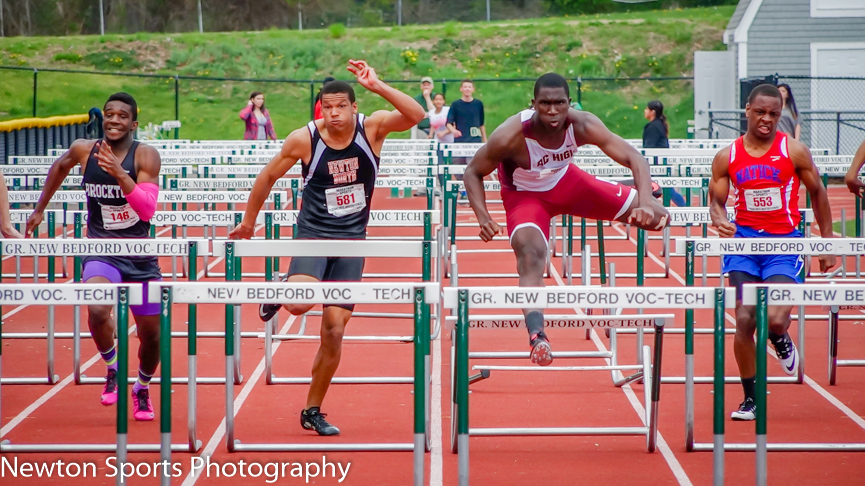 The PR’s and fast times kept on coming as the meet moved into the relays. The 4x100 was won by Weymouth, the aforementioned All-State 4x200 champions. The quartet of Adrian Radel, Elijuan Diaz, Henry McDonald and Dave Harrison won with a blazing meet record of 43.06, and they did so without arguably their fastest runner, Tyler O’Brien, who took third in the 200 with a 22.69. Crossing the line a full second later was Waltham, who ran a still-respectable time of 44.21. Braintree HS took third with a 44.43.

Lowell HS, who were 7 seconds ahead of second place finisher Monument Mountain and 12 seconds ahead of 3rd place Norton, comfortably won the 4x800 relay.  In the 4x400s, only one team dipped under 3:30, and that was St. John’s Shrewsbury at 3:29.48, followed by New Bedford HS at 3:30.31 anchored by 400mH champion Irvin Johnson. Innovation Charter took third at 3:30.76, anchored by Nick Scarsdale who took second place in the 400m.

Mark Pighetti, who also took the 100m final, won the long jump with a jump of 21-10.5. Pighetti, according to available online results has jumped 22’8 thus far this season, ranking him behind Hingham’s Bolze who has jumped nearly 24 feet in his dual meets. Mark Hamalian of BR took second 8 inches behind him with a jump of 21-2.  In the triple jump BC High's Samuels won his second event of the day, with a hop, skip, and step of 46' 1 3/4".

Andrew Connolly of Weston won the javelin throw with an effort of 186-01. Not far behind him was Mitch Early and Jacob Pawlina with throws of 182 and 180-3 respectively. Nick Fofana, before taking second in the hurdles, placed fourth here with a PR of 174-01.  The discus was won easily (and by easily, I mean 30 feet ahead of the field) by Framingham’s Eric Mellusi, with a throw of 162-02. Last weekend at the Weston Invitational, Mellusi threw a massive PR and MA #1 of 170-4. Taking second here at the Coaches invite was Oliver Erickson of Mansfield with a throw of 134-9, and Ryan DeMarinis took third with a throw of 133-10. In fourth place was Evan Dombrowski of St. Johns, who doubled up in the throws and won the shot with a throw of 51-05. Mellusi was not far behind him with a toss of 49-11.25. Three inches behind Mellusi was Johnny Irvin of Wareham at 49-07.