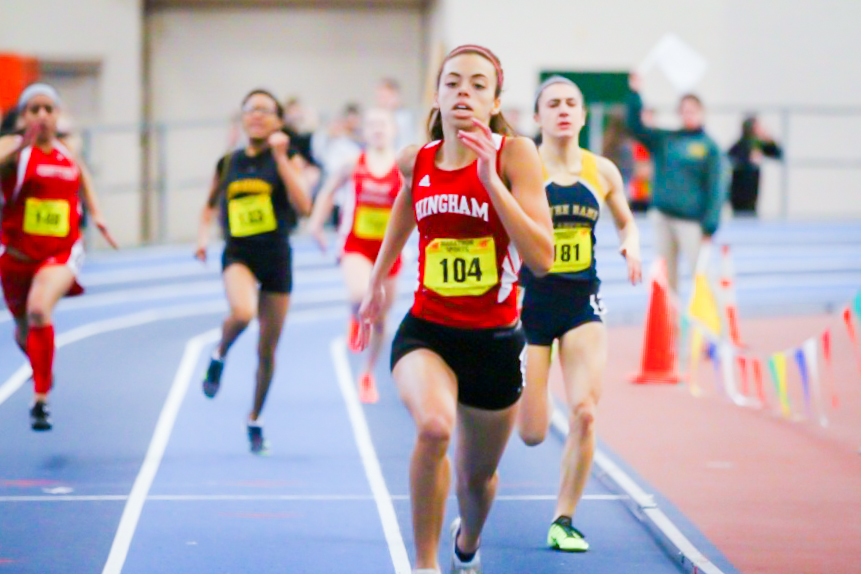 It was very apparent after they took turns shredding the competition in their preliminary heats of the 55-meter dash - breaking the meet record twice - that Hingham's Sierra Irvin and Jessica Scott of Hopkinton were headed for an epic showdown in the final.

The matchup didn't disappoint the Reggie Lewis Center crowd as Scott broke the meet record for the second time in 30 minutes, sprinting to victory in 7.06 seconds at yesterday's Div. 3 Indoor Track & Field Championships. Scott's time moved her to No. 5 all-time in Massachusetts. Irvin blazed her way to a 7.20 for second and Amanda Reilly of Notre Dame of Hingham was an eyelash back in third with her 7.21.

As good as her start was in the preliminaries, Scott was even quicker out of the blocks in the final. "I really wanted to get under 7.1," said Scott, who will attend Northeastern. "I got a good start in the first race, but I got a little better start in the second race. I knew I had competition to push me."

Bishop Feehan edged out a tough Hingham squad 82-80 to capture its first team title since 2010 in what is Shamrocks' head coach Paul Powell's final season at the helm.

"I'm so pleased," said Powell. "So many of them stepped up for us. We were seeded with about 64 points and we ended up winning with 82. We haven't won in a long time and really wanted this. I knew Hingham, Notre Dame and Hopkinton would be right there. This is something we wanted bad for a long time. To be able to do this with the weather we've had is great.'

The Shamrocks' Abbie McNulty went to the front on the second lap of the mile and ran away with tracks glamore event in a personal-best time and school record of 4:55.80, the fastest time in New England this winter. McNulty came back 45 minutes later to easily win the 2 mile in 10:58.91.

"I really wanted to get a good time," said the Stanford-bound McNulty of her mile. 'I wanted to be 2:28 or 2:29 at the half and really push hard on the fifth and sixth laps."

McNulty's future teammate at Stanford, Karina Shepard, was feeling less than 100%, but it didn't show as she that didn't stop her from buried the 1000 field and established a new meet record of 2:56.90. "I've been feeling a little run down this wek," said Shepard. "I definitely think I have more in me, but that can wait until next week at the state meet. I really wanted to get the meet record."

Bishop Feehan also got a big race out of Elizabeth Hannon in the 1000, where she took second behind Shepard with a quick 3:00.58 and put three sprinters in the top 8 in the 55 with Riley Scharland placing fifth (7.56), Arianna Bruno in seventh (7.64) and Megan Luongo taking eighth in 7.67.

Legend-in-the-making Andrew Bolze of Hingham powered his way through the 300 in a meet record of 34.30 in his bid to earn the top seed at next Saturdays all-state meet. He went on to anchor the Harbormen to second in the 4x400 with a scalding 47.5 split. Bolze was also victorious in the long jump with a strong leap of 23-1/2.

"I wanted to come in and get a good time for next week," Bolze said of his 300. "It would be really nice to lower the record."