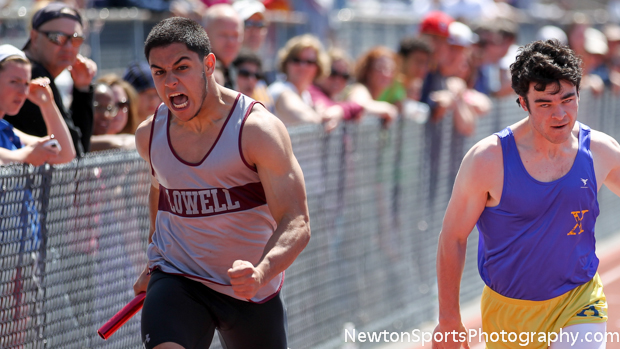 Deep and tough proved to be Weston’s calling card.

The meet was dubbed as the Div. 4 State Coaches Relays but it was Weston that turned the competition into its own highlight reel show at John B. Reilly Field.

The boys were easy winners, putting up 65 points to defend their title against Norton (44 points) which finished in the runner-up spot for the second consecutive year. The Wildcat girls rung up 56 points to defeat a tenacious Ursuline Academy club (47 points) in warm, calm conditions.

It was the first time in Monz’s 35 years of coaching that Weston swept both team titles in the relay meet. “I don’t think you ever expect to win, but you do hope to win,” he said. “We put lineups together hoping to give us a good shot at it. We really had a lot of kids do multiple things. We graduated a lot so we didn’t necessarily think we were going to come back and have a shot. These kids stepped it up and did a very good job today.”

The Wildcats had some heady performances starting with the javelin team. Weston’s lineup of Andrew Connelly, Alex Mundo and Brett Rose bested the year-old 131.28-meter mark of Norton’s with a combined distance of 138.88. The second-place Lancers also bettered their own mark at 131.44. The javelin has proven to be one of the deepest events for the Wildcats this season and their “B” team also earned a medal with a sixth-place finish of 117.68.

Weston also picked up the gold medal in the sprint relay, easily defeating Arlington Catholic with a time of 3:40.67.

“We point to this (meet),” said Monz. “To us, this meet and the state Div. 4 meet are the two big championships. Yeah, we circle this on the calendar.”

Norton has been improving consistently over the past four years and head coach Kent Taylor was pleased with another runner-up finish to the Wildcats. “Weston’s a very good team. Hats off to them today,” he said. “We put everything together that we could and we just didn’t have enough. I’m very happy. I knew we could be top three today. I knew Newburyport and OR (Old Rochester) would be in it. I’m very proud of this team and where it’s come in the last four years. This team was non-existent five years ago. We’re very happy where we’re at.”

Don’t be surprised if Reading’s Robbie Federico goes by “The Anchorman” for the remainder of his shining high school track career. The talented senior earned the title by closing out two of the Rockets’ wins at Saturday’s State Div. 2 Relays on the sun-splashed Walpole High track.

Federico and his crew were more than ready to drop the mark and the school record. “We knew what the meet record was,” he said. “(Head coach Hal) Croft talked to us about it. He said we had enough talent to go out and get it. We just wanted to go out aggressive and get good handoffs down. We work the handoffs a lot and have a talented team.”

North Andover, which this season has moved up to the super-competitive Merrimack Valley Conference, picked up wins in the pole vault (9.45 meters), high jump (5.34 meters) and sprint medley (3:36.29) on the way to edging out Reading in the team competition with 58 points. The Rockets checked in with 56 points for second and North Attleboro finished with 53 points for third.

Captain Kyle Quinn and David Rose were pivotal in the Scarlet Knights’ victory with strong performances in the pole vault and 4x400. “We’ve been building towards this meet since before the indoor season started,” said head coach Steve Nugent. “We knew this was a good meet that we had a chance to be competitive at. I’m just glad we showed up today and competed. We didn’t mix and match with any team. We just knew where are strengths were.

“We have a lot of depth as a team and this is a meet that is all about depth,” said Andrade. “We knew after Thursday that we came in with eight points in the pole vault. I don’t think we knew we’d do as well in the field events.”

The meet began with a moment of silence for the Boston Marathon bombing victims and Matt Shea, a Walpole High alumnus who passed away last week after a battle with cancer. Rebels’ head coach Kevin Butera, who was a teammate of Shea’s at Walpole, reflected on his friend.

“He meant a lot to our program,” said Butera. “Matt was the guy who made you feel like you were supposed to be there. He was a tall, lanky distance runner and he’d welcome you in.”