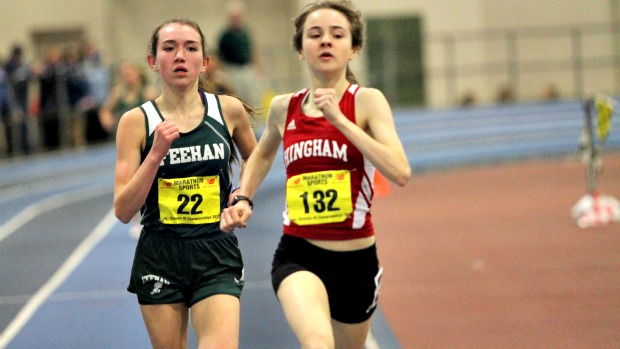 Julie McConville is well known in Massachusetts, but now she is taking her talent to the West Coast.

The Distance runner from Hingham, Massachusetts has flown under the National spotlight radar until she received the Golden Ticket from the Brooks PR Invitational. Some of the best High School athletes from around the country will assemble at the Dempsey Indoor Stadium in Seattle, Washington this coming Saturday.

McConville is fresh off of an 18 point effort  to help her team capture the Massachusetts Division 3 Championships this past weekend. She finished second place to archrival Abby McNulty in the mile , and followed that performance up by defeating McNulty and winning the two Mile run .The defending Indoor All State Champion in the two mile will bypass this year’s State finals for the national event.

“My coach called me and let me know that I was invited, it was very surprising and exciting, especially because I remember following the Brooks PR Invitational online last year,” she said.  “I'm most looking forward to meeting other high school runners and hopefully some Brooks athletes as well. Also I've never been to Seattle, so visiting a new city should be fun.”

The Dartmouth College bound McConville will be competing in the 2 Mile run and is currently ranked # 3 in the nation.  Her 10:28 clocking came early in the season on the back end of a Mile / 2 Mile double.  A few favorites in the event include Wesley Frazier, North Carolina (10:10),  Erin Finn, Michigan (10:18), and many other runners that have personal best times around McConville’s. The intense Massachusetts indoor track season should be a big advantage for the Hingham high school senior, and could help her land on the medal stand in Seattle. 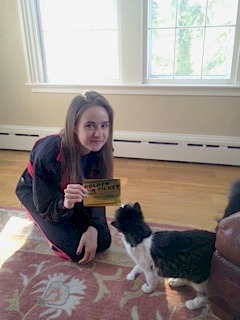 Getting To Know Julie McConville:

What are your goals for the weeks ahead?

I look forward to having fun, meeting new people and hopefully setting PRs at the last few meets of winter season.

What are your goals for the upcoming Spring Season?

What was your most memorable race in your running career?

If I had to choose I would say the 2013 Massachusetts state relays for Division 3 when our girls team won by 2 1/2 points.

Living in the Northeast, where do you do most of your training during the winter months?

Outside in the cold, often through snowbanks. Usually the main road of a nearby state park is plowed so members of my team and I are able to run there. I've gotten used to the weather over time so it's not bothersome anymore.

What is your favorite type of workout?

Long runs in the summer !

What are some non-running related things people don’t know about you??

I'm addicted to crosswords and I have a cat named Pepper.  I spend way too much time watching free documentaries on Netflix. My favorite place is my grandparents' house in Cape Cod.

Who is your favorite athlete from any sport?

Lance Armstrong......just kidding- I would say Danica Patrick because it's inspiring to see her challenge the gender conventions that are still so prevalent in racecar driving.

What other sports did you play growing up?

I tried pretty much everything like soccer, lacrosse, softball, sailing and basketball.. In middle school I wanted to row and play basketball in high school.

Who has been the person or people that have really inspired you in your running career?

Watching how much work my parents do every day and seeing my coaches at school be so dedicated to their jobs inspires me to train hard.

What music do you listen to prior to your races?

Anything from Avicii to Lil Wayne to country.. my playlists are really varied and always changing.

If you were stranded on an island with three things what would they be?