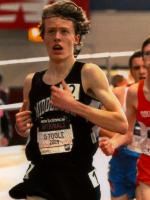 Sort By:
Filter By:

North Carolina's Future Stars of XC Boys Team...
Sometimes consistent improvement doesn&#39;t get the headlines, but it DOES lead to future success!...