With mostly sunny skies and 70-degree weather year round, San Diego is considered one of the best places in the U.S. to kick back and relax. 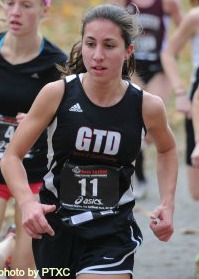 But while the forecast looks promising this Saturday for another stellar day at “America’s Finest City,” a little R & R will be the furthest thing on the minds of some of the best high school runners in the country as they invade the city’s Balboa Park for the annual Foot Locker Cross-Country Championships. It will be all business for the 40 boys and 40 girls that have qualified for the national competition, a field that features four gifted harriers from New England.

“I am going to have some fun down there, but race day everyone is ready to go,” said Peabody (Mass.) High senior Catarina Rocha. “I will be in race mode.”

Rocha is the lone area girl that will make the transcontinental flight to the West Coast, but she’s also the most experienced. The 17-year-old standout and two-time MIAA Division I state titlist will be toeing the line at Foot Locker for the third straight year. She finished 31st overall as a sophomore and was seventh last year as a junior.

“She knows the course very well,” said her dad and Peabody coach Joe Rocha. “But all the runners have improved from last year. Our goal is to try and get better from the year before. Every year you never know. Each race is different.”

Rocha earned her ticket to San Diego with a convincing victory at the Northeast Regionals on Nov. 24 where she covered the demanding five-kilometer layout at Van Cortlandt Park in New York with a time of 17 minutes, 49.5 seconds. She was 19 seconds ahead of runner-up Megan Curham of New Jersey.

Rocha’s win at the regionals was certainly no fluke. She has been dominating the competition all season. The Peabody runner owns a 5K personal best of 17:27.4, a time that carried her to a meet record and a 50-second win at the MIAA Eastern State Championships on Nov. 10.

Rocha was more than two minutes ahead of the field at the Northeastern Conference Championships (NEC) on Oct. 22 with a meet mark of 17:22 for the 3-mile terrain. At the state meet on Nov. 17, she led Peabody to the team crown with a dominating triumph at Northfield Mountain, covering the challenging course in 18:06.12. Acton-Boxborough’s Christine Davis was a distant second at 18:51.02.

“The main thing,” said Joe Rocha, “she is improving by 35-40 seconds faster on the same courses she ran last year.”

Catarina Rocha will be competing on a course that she has become familiar with considering she has run it the last two years. It’s also one that is slightly faster than the treacherous topography at Van Cortlandt.

The younger Rocha is the fourth from her family to compete in the nationals. Her father and her mom, Gina, competed at the then-Kinney Nationals in the early 1980s and her uncle Fernando Braz, who also starred at Peabody, was a participant in the late 1970s.

Rocha believes she’s capable of replicating last year’s performance and earning All-American status based on a top-15 finish. Some of the best girls in the field include South winner Sophie Chase of Virginia (17:05 at regionals) and Midwest victor Anna Rohrer of Indiana (16:54).

“I am just going to take it like any other race,” Rocha said. “I just want to run the race I usually run. Hopefully I’ll be up there after the first mile and I’ll just take it mile by mile. Everyone there is great….I am going to run my own race and see what happens. If I can get top 7 or top 14 that would be great.” 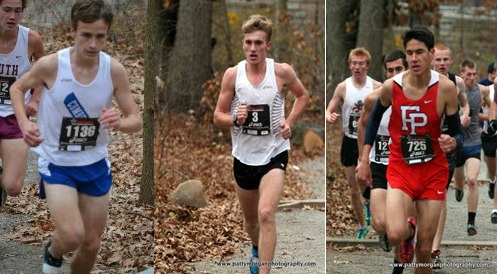 Massachusetts will also have a Foot Locker returnee on the boys’ side with St. John senior Jonathan Green making his second consecutive trip, thanks to his second-place effort at the regionals behind last year’s national champion Edward Cheserek of N.J.Cheserek broke the tape at 15:21.8 with Green crossing the line in 15:36.8.

“I am excited to be going down there again,” said Green, who was 22nd overall in 2011. “I just want to improve off of last year. Anything can happen in the race. All American is definitely a goal.”

The St. John runner won his second straight MIAA Div. I state title this year and had some impressive wins at the Ocean State Invitational (Sept. 29) and the MIAA Central District Championships (Nov. 10) where he obliterated a 14-year-old meet record with a time of 13:50.8 for 2.9 miles at the Gardiner Municipal Golf Course.

Green considers Balboa Park to be a fair course.

“It has one major hill (at the mile) and a really steep downhill,” he said. “It’s a good course. I like it a lot. It’s not super-fast, but it’s not super-slow.”

Green is just looking to go into the meet with a level head and to run smart.

“There will be people with all different race plans,” he said. “Some will run hard and some will run easy. You just have to stick to your own race plan.”

Trevor Crawley, a senior from Cumberland High in Rhode Island, became only the sixth runner from the Ocean State to qualify for the Foot Locker finals when he placed sixth at the regionals with a 15:47.3 clocking.

Just a few weeks earlier on Nov. 4, Crawley captured his first RIIL state cross-country title and followed that performance with a runner-up finish at the New England Championships on Nov. 10. He was also the individual champion at the Class A meet (Oct. 26) and was second at the prestigious Brown University Northeast Championship (Oct. 20).

“This is probably the one I am most proud of,” said the Clipper standout, about his coveted spot at the Foot Locker finals.

Throughout his career, Crawley has demonstrated uncanny consistency and has rarely, if ever, had an off day on the trails. He’s prepared for whatever Balboa Park has to offer, including its challenging uphill climb at the first mile.

“I have been running hills pretty much every day,” he said. “I am used to running hills. I just want to go out with the lead pack and hold it to the finish. Right now, I don’t really have a plan. I will wait and see when I get down there.”

Longtime Cumberland coach Tom Kenwood expects his star harrier to be competitive - no matter what pace the race dictates.

“I know he can run fast,” he said. “I have seen him run 4:40 miles at the beginning of some of his races. We know he can go out fast and maintain. He knows how to run in any circumstances.”

Finishing less than two seconds behind Crawley at the regionals is the last New England qualifier, Christian Alvarado of Fairfax Prep in Connecticut. Alvarado, a junior, sizzled to an eighth-place finish in N.Y., with a personal best if 15:49.1.

There are an abundance of gifted runners that will be vying for individual supremacy for boys. During the four regional competitions, eight athletes dipped under 15 minutes for the 5K distance with Virginia’s Sean McGarty posting the fastest time of 14:28 at the South Regionals. Most experts are considering Cheserek, the 2011 champ, as the runner to beat.

The girls’ race on Saturday is set to kickoff at 9 a.m. and the boys are slated to begin at 10 a.m. PST. Melody Fairchild, a former phenom from Boulder (Colo.) High, holds the current girls’ record at Balboa Park, recording a time of 16:39.8 at the 1990 Kinney Nationals (now Foot Locker). Former U.S. Olympian Rueben Reina, an ex-star from Jay (Texas) High, has the boys’ mark with a winning time of 14:36.8 in 1985.