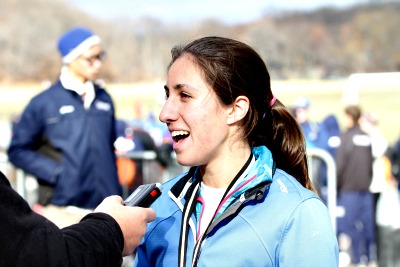 Wrecked, shredded, and dismantled. Call it what you want, it really doesn’t matter. For the third time in two weeks, Peabody’s Catarina Rocha put the hammer down on another deep cross country field. This time it was the Northeast that got a big, bad dose of Rocha.

After easy wins in both the Div. 1 EMass and All-State races, Rocha hung around with the leaders for the first half before changing gears at yesterday’s FootLocker Northeast Regional Cross Country Championships. Racing in chilly conditions that included a light snow flurry in the final half mile, Rocha was all smiles as she earned her third consecutive trip to the FootLocker Finals with an easy 17-minute, 49.5-second victory over the challenging 3.1-mile Van Cortlandt Park layout. The finals will take place in Balboa Park in San Diego, CA, on Dec. 8. Rocha, who was seventh in last year’s finals in San Diego, was done and through the finish-line chute before runner-up Megan Curham of Warren, NJ (18:08.5) and Katie Lembo of Penfield, NY (18:11) crossed the line. The Regional win was Rocha’s first after finishing third and fourth, respectively in 2011 and 2010. Rocha cased the course on Friday after and decided with her coach and father, Joe, that she’d stay tucked in the pack in the early going before moving hard after the halfway mark as the course crossed over the Henry Hudson Parkway and into the treacherous Back Hills. “I never felt like that before,” Rocha said of the smile she flashed near the finish. “I don’t think I ever thought I’d be at this point. The first mile I stayed with them, because in this race, anyone can win. When I felt good I picked it up a little heading into the woods. I was getting tired at the end. It’s a long stretch and you can see the finish line. “I want to go out there, run and hopefully place in the top 15 like last year. If I do better, great. If I don’t, I got to go anyway. It’s great being out there and meeting runners from all over the country. It’s really exciting. Whoever’s there is there.”

Joe Rocha was confident Catarina was thoroughly prepared for a victory. “I told her after the 2-mile mark to make a move on the incline,” said Rocha. “We didn’t want anything coming down to the last 600. She was nervous, but she was focused. For the first time I saw she was nervous, yesterday and today. It was a good nervous. I told her it was ok to be nervous that way. She had a mission. The mission was to win. I told her the goal is to go. She doesn’t say much, but in the back of her mind I knew she wanted to win.” As for the pressure of being the daughter of two former FootLocker finalists and the niece of another, Catarina simply doesn’t let it bother her. “She’s strong. She’s in that zone right now. I think special things are going to happen. I’m proud. She handles the pressure. She’s her own person. Catarina has pressure being our daughter. It doesn’t bother her. She doesn’t care who she’s running against.’

Catarina’s mother, Gina, knows her daughter is more than just an elite high school runner and isn’t defined only by what she does when the gun goes off. “We’re just so proud of her,” Rocha said. “She’s really a terrific young lady. The nice thing is that she’s a real humble kid and that makes me very proud. When you look at her high school career, what she wants most to be remembered before at Peabody High School is that she made a difference there and not through her running. “She’s been secretary of the class for four years now. She’s involved in numerous organizations and she’s trying to build a community center for disadvantage youths in our downtown area. I think that’s what Catarina wants to be remembered for. Any little bit of difference she’s made in someone’s life, that’s what Cat’s about.”

Two-time Div. 1 state cross country champion Jonathan Green of St. John’s of Shrewsbury ran with defending Footlocker national champion Edward Cheserek for the first 800 meters and was content to race the rest of the field in the elite boys’ race. Green passed the mile in 4:51 with Shawn Wilson of Marlton, NJ in tow and pulled away for a strong second in 15:36.8 behind Cheserek’s 15:21.8. Wilson was third in 15:42.5.  Green’s strong showing came on the heels of course-record victories in the Central and All-State championships. “I placed exactly where I wanted,” said Green with a smile. “I came in hoping to get second. I knew Cheserek was going to do his thing. He kind of broke away.” Green felt strong, but decided beforehand he wouldn’t make a move for the lead on Cheserek, who hails from Newark, NJ. “If I made a big enough move he would have matched it right then and there and keep the distance between us the same. After placing 22nd at last year’s finals, Green is ready to move up. “I want to do as best as I can,” he said. “I don’t have a specific goal yet. I’m excited and I’ll be ready to go.”

Paul Hogan of Burlington ran in the top 10 early before fading to a still-impressive 24th in 16:20. “I went out really fast and on the hills I just died,” said a disappointed Hogan. “I wasn’t expecting to get the top 10, but I was aiming for the top 20.” Mike O’Donnell of Methuen ran well to place 11th in 15:54, just missing clinching his spot in San Diego. Trevor Crawley of Cumberland, RI, was sixth in 15:47 and Fairfield, CT’s Christian Alverado took home eighth in 15:49.