Two meets marked the final weekend of invitationals on the Massachusetts cross country calendar before the schedule gives way to conference meet season. Some headed West to Northfield Mountain for a preview of the All State Championship course, while others headed South to race the Brown Invitational at Warwick, RI's Goddard Park. Two very different courses, one tactical, slow climb up a mountain, the other a fast track, perhaps just short of a 5K, but who's counting anyway?

Every three years, when the All State Meet heads West to Northfield, the MSTCA puts on an invite there to get runners accustomed to the steep climb of the early portion of the race. Some simply put their head down and find a way through the hills, while others would prefer hiring a Sherpa, viewing the steep ascent as more of a death march than a cross country race. 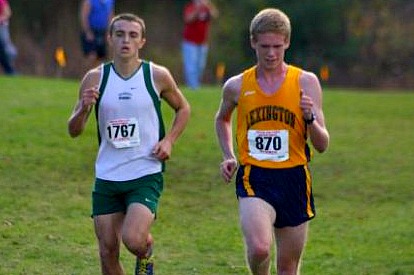 In the DII boys race, #3 Bishop Feehan took the crown over #21 Newburyport and #25 Hopedale, but the title race ended up closer than many would have expected. The Clippers' Nick Carleo ('s Way) took home a close win (16:20) over Burlington's Paul Hogan (16:23), each distancing themselves from Norwell's stallion Owen Wiggins (16:47; 3rd) in the later stages. After Feehan's Evan Grandfield (4th; 16:56) and Mike Hanley (5th; 16:59) crossed the line, Newburyport countered with Joe Santo in 6th (17:110, and then clung to a one-point lead through three runners, thanks to Chris Orlando (18th; 17:43) nudging in right behind Feehan's Henry Dodge (17th; 17:40). Feehan put away the 20-point win on the strength of their tight 1-5 packing, something the Clippers were unable to replicate. 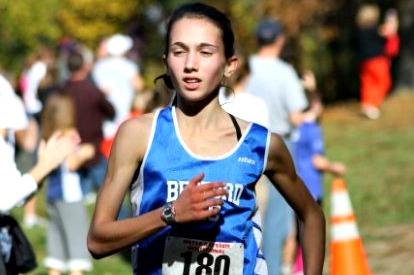 The girls races unfolded similarly to the boys, as in the DI race, Catarina Rocha of Peabody simply torched the field in 18:49, making her the 6th fastest ever on the course, a list headed by Olympian Shalane Flanagan in 17:54. Rocha's aggressive front-running style might have cost her a few seconds on the clock, but her experience and intelligence makes her almost impossible to beat come November. Acton-Boxborough's Christine Davis crossed in 20:11 in 2nd, ahead of Colleen Sands (20:23) of Wachusett and Shelby Cuddleback of Attleboro (4th; 20:27). The team race was much more interesting this time, as #1 Peabody rode top-10 finishes from Lauren Barrett (5th; 20:30) and Sam Allen (7th; 20:48), and won with 88 points, despite missing Heather MacLean. #19 Lexington, without a top-10 finisher, used its impressive pack to take 2nd, with Cassie Peterson (15th; 21:09) leading the way. #11 Notre Dame (Hingham) continued its impressive fall, using the threesome of Taylor Kennedy (13th; 21:08), Shauna Owen (16th; 21:11), and Elizabeth Constantino (19th; 21:22) to pull ahead. #25 Wachusett was 4th, one slot ahead of #14 Concord-Carlisle, with #21 Franklin in 9th.

Two Massachusetts teams took runner-up prizes in the Championship sections of the Brown Invitational, each proving their extremely high rankings to be valid. #2 Pembroke's boys gave Greg Zopatti reason to be optimistic of a state title, with their 2nd place haul, behind only St. Anthony's (NY). With St. Anthony's bringing in 6 of the top-16 runners, Pembroke needed simply to hang on to the trophy, and with monster efforts from juniors Christian Stafford (5th; 15:42) and John Valeri (6th; 15:44), the Titans had the top two underclass times of the day. An off-day from senior Pat Cunningham required step-ups from Billy Stafford (16:24) and Alex Bowler (16:37), and the Titans secured a nice result. Lenox's Scott Carpenter gave notice to the state, and ALL of its runners, that he wants to prove he is the best, as he dominated a deep field in 15:15 for the win. #7 Amherst, led by Ryan Stender (16:28), nosed out Whitman-Hanson and Nate Stephansky (16:13) for 6th place by just 5 points. Ludlow's Brian Crowley (16:20) ran 7th in the DII boys large schools race.