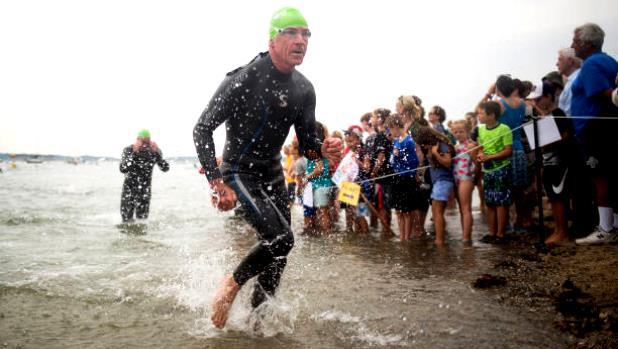 On Aug. 4, Save The Bay veteran Ron Gillooly will take the plunge for the 25th time.

The 57-year-old Stowe resident did his first Save the Bay in 1990 and estimates he's raised more than $10,000 over the years.  The open water swim starts at the Naval Station in Newport and finishes at Potter Cove in Jamestown, R.I.  It is 1.7 nautical miles and usually draws about 500 participants.  The conditions vary with the tides of course but the event is recognized as one of the leading open water swims in the United States.

Indeed, a disciplined swim training program is necessary to complete the distance.  To complete it 25 times in 28 years is, shall we say, extraordinary.

To understand what has enabled this longevity and to understand what makes Gillooly tick one must go back to the late 1970s when he excelled for the Cumberland High (R.I.) track and cross-country teams. It was there that his incredible athletic work ethic was born. But to say that the former all-stater has a good-work ethic is a bit like saying Bob Dylan was a pretty good song writer.  You must take a stroll down memory lane to appreciate the discipline, perseverance, courage and relentless determination that enabled so much athletic success over 40 years. 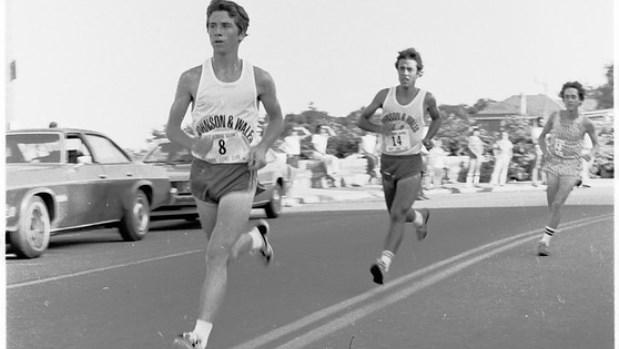 Where It All Began

It was the fall of his senior year in 1977 that Gillooly first decided to run cross country. His sole purpose of joining the team was to get himself into shape for the upcoming wrestling season where he was a three-year veteran under future Hall-of-Fame coach Steve Gordon. Gordon, who retired this past year after 50 years at the helm, was pleased that his 105-pound grappler would come in fit.

During that fateful season, the Cumberland X-C squad wasn't predicted to be a title-contender.  Coached by the late Harry Gederman, the Clippers had some talent but weren't considered a serious challenge to heavily-favored La Salle Academy. Gillooly's progress over the course of the season was impressive.  He broke into the top seven early on and was running fifth or sixth for the team by the time the Class A Meet rolled around. Gederman had the team peaking at exactly the right time for the State Meet in early November at OLP Seminary in Warwick. The squad performed as expected, but it was Gillooly's closing drive in the late stages of the 2.4-mile course that lead to a stunning upset over La Salle.  He overtook 12 runners in the last half mile, an effort that enabled Cumberland to edge the Rams by a single point and earn its' first boys' state title in school history.

Cumberland had a tradition of distance running excellence, dating back to 1968. Future Green Beret, Rick McLaughlin took the individual title that year. Many other good runners would follow in his footsteps and shine under Gederman. Among them was two-time Ocean State Marathon winner Tom Grundy, Tom and Bob Ratcliffe, Walter Grant and Daryl Simoneau.

December was a month of transition for high school athletes and Gillooly was missed immediately by the core group of distance runner who were just getting started for the upcoming indoor track & field season. Gillooly's wrestling wasn't going as well as expected and the running bug had bit him, and it wasn't letting go. He had gone well beyond his goal of "getting in shape" for wrestling.  Gederman declared him the hero of the day and credited the team's victory to his gutsy home-stretch run.  That race and that victory as well as the press that followed, whetted his appetite and he was hungry for more.  He didn't merely get in shape over the course of that initial season, he became a real runner and what happened at the state meet sealed the deal.

As such, Gillooly was dreading the conversation that was looming. Gordon liked Gillooly, respected his work ethic and didn't want to lose his gifted senior from the squad. Gordon was just finishing his first of five decades as the head coach when Gillooly broke the news that he would dedicate his last season to the track. The wrestler's work ethic is not unlike the discipline of a distance runner.  They share many attributes and sacrifice other aspects of life in pursuit of excellence.  Though disappointed to lose him, Gordon understood the decision.  A respectful handshake followed, and the legendary coach wished the young runner his best.

The Clippers would follow their cross-country state crown with an indoor title under recently-retired coach Tom Kenwood. Gillooly would finish fifth overall in the two mile at the championship meet, running a time of 10:10. He would earn All-State honors during the outdoor campaign where he placed second overall to Grant in the two mile with an all-time best of 9:38.

Gillooly's rapid improvement would continue at Rhode Island College where he was a Division III All American in cross country and was fifth for the 10K at the New England Championships where he clocked a school record of 30:15, a mark that still stands today. Since Gillooly started running late in high school, he didn't draw much attention from colleges for a runner of his caliber.  Many of his wins at RIC were blow-outs. With margins of victory sometimes more than a minute, he was rarely challenged.  In reality, the races were more like time trials where it was just him against the clock.  Being a big fish in a small pond wasn't sitting well.  He wanted to run against better competition and fulfill his true potential.

In 1982, Gillooly moved to Boston and took a job working at New Balance in Customer Service.  The running boom was at full strength in the early 1980's.  He moved in to a house in West Newton with his good friend Tom Ratcliffe, who had recently graduated from Brown University.  Ratcliffe was now a national-caliber runner, having finished second at the Nike OTC Marathon in Eugene, Oregon in 1981.  Mick O'Shea, a former Providence College 5k and 10,000-meter ace, was amongst the original roommates with Ratcliffe.  Others would follow, such as 2:17 marathon runner and Columbia University star Wally Collins and Pete Pfitzinger who would go on to win the 1984 Olympic Marathon Trial in dramatic fashion over Alberto Salazar.  The house became known as The River Street Athletic Club in the Boston Running Community.

Ratcliffe loved running and he loved travelling.  He made friends all over the world and River Street was a haven to world-class athletes from all over the globe.  Gillooly and Ratcliffe were the heart and soul of River Street. They made sure the rent was paid, the fridge was stocked, and the weekly chores were delegated.  There were always runners coming and going, trip to the airport, travel to book for the next race.  The house had a frenetic energy about it.  Mostly though, they trained with Olympic Trial aspirations, and beyond they set out to become the best runners they could possibly be.

Four runners appeared to influence Gillooly the most. Ratcliffe was probably the closest to him, a good friend and a fierce rival once the gun cracked. They logged thousands of miles together along with Ron's younger brother Pat, who was a high school star at Cumberland and went on to earn All-American honors at Boston University and later clocked a lifetime best of 2:20 for the marathon.  Pfitzinger and Kevin Ryan, a 3-time Olympian in the marathon from New Zealand, were also very influential to Gillooly.  Both were high-mileage runners.  The volume of training they could withstand was staggering at times.  It wasn't unusual for Ryan to run over 150 miles in a single week. Pfitzinger who would also push it to the 150 per week range had a similar work ethic, but with a more scientific approach to his training. Success in distance running often comes when a group of talented runners pull together to work and train for an extended period of time.  It was in this environment that Gillooly thrived, made lifelong friendships and made his mark in the Southern New England Running scene of the 1980's.

Throughout his running career, the accolades were impressive. In addition to what he accomplished at the high-school and collegiate level, Gillooly also excelled as an open runner. He is a past winner of the Blessing of the Fleet 10-Mile Road Race in Narragansett. In 1983, he blazed to a course record time of 49:48. The following year, Gillooly was a runner-up to Ratcliffe at the Midnight Sun Run Denali Alaska where he finished with a PB of 29:17. At the time, that was the second fastest 10K ever run in Alaska. Also, in 1984, Gillooly would run a best of 14:05 for five kilometers.

The years rolled on. The competitive running aspirations dampened with the aches and pains and, in the case with Gillooly, morphed into swimming, surfing and snowboarding. His swimming was impressive, hovering around the 40-minute mark at the Bay swim and finishing among the top 10 out of the water and leading his age group. The event became a special event on his calendar and motivating him to rise early every day and train with the Atkinson Team near his home. 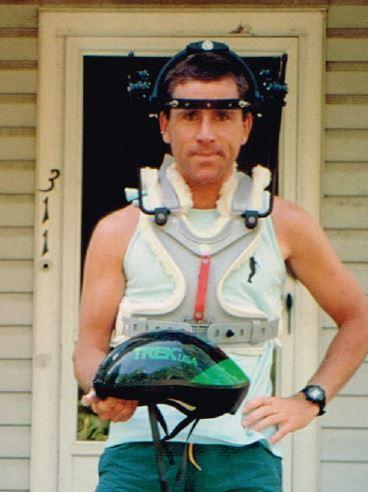 Gillooly's determination and competitive drive were tested to the limit when he was involved a serious accident while out riding his bike. A driver made a reckless turn into his path and a violent collision followed.  He was sent hurtling out of the saddle impacting the ground on the crown of his helmet, resulting in vertebrae fractures at C2 and C7 as well as an injured neck.  Family, friends and his soon-to-be wife Lisa rallied in prayer and support.

His courage and work ethic would be on display perhaps stronger than ever before through the rehabilitative process. In a matter of weeks, Ron returned to work at Narragansett Electric, still with a halo on his head. He was walking as much as 10 miles a day and working to restore as much range of motion as possible in his neck and shoulders.  He would miss the Bridge Swim that year and only on one other occasion since 1990 due to a scheduling conflict.

"Ron approached everything with dedication and determination," states Ratcliffe. "But his greatest attribute was consistency. He always had a plan and struck to it.  It didn't matter if it was training, racing ... or going to bed at 9:00, he rarely veered from the schedule. But this goes way beyond athletics. Ron was consistently a thoughtful roommate, a reliable training partner and most importantly, a true friend."

Today, Gillooly is the happily married father of four and The Director of Industrial Energy at Leidos.

Help support Gillooly as he competes at this year's Save The Bay. Donations can be made to Gillooly on his fundraising page on the Save the Bay website (savethebay.org).