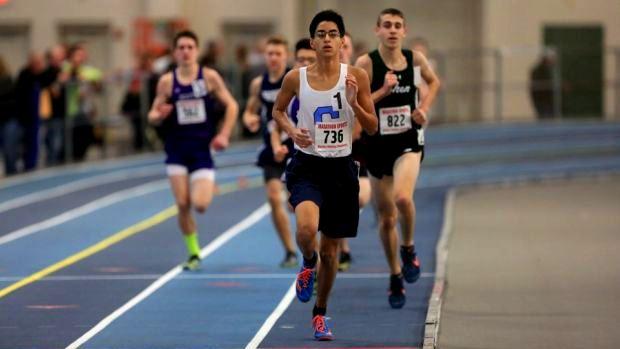 Seekonk's Andrew Cabral is the No. 1 seed in the mile where 11 have dipped under five minutes.

The underclassmen will be taking center stage this weekend with the annual Auerbach Freshmen-Sophomore meets at the Reggie Lewis Athletic Center. The Large Schools will contest on Saturday, while the Small Schools will compete on Sunday.

Here we feature the Small Schools and a glimpse of some of the top events to watch.

Seekonk's Andrew Cabral appears to be the runner to beat in the mile run. Cabral is coming off a solid cross-country season where he captured the Freshmen Division 1 race at the Ocean State Invitational and was 17th overall at the All State Meet. This indoor season he clocked a best of 4:52.55, which he did to place second overall in the Frosh race at the recent Boston Holiday Challenge. Ipswich's Jack DeMarco is the No. 2 seed with a 4:54.02 best. In all, 11 runners in the field have broken five minutes.

Amherst-Pelham's Isabela Shepard is the clear-cut favorite in the girls' 600m. The talented sophomore was fourth overall in her specialty at the Boston Holiday Challenge where she crossed the line in a PB of 1:41.35. That time is four seconds ahead of her closest rival.

There's a few meet records that have a chance of being eclipsed at Sunday's meet.

Medford's John McNeil is far ahead of the field in the high jump where he owns a best of 6 feet, 3 inches, just an inch from the meet mark of 6-4. Medway's Abby Greely could challenge the MR in the girls' long jump. She did 17-2 last spring, an effort that placed her eighth overall at the Eastern Division 3 Championships as a ninth-grader.  The record in this event is currently 16-11. Among other records that could fall this weekend is the boys' 4x400m relay. Dighton-Rehoboth owns a time of 3:34.70, nearly three-seconds faster than the MR of 3:37.50.