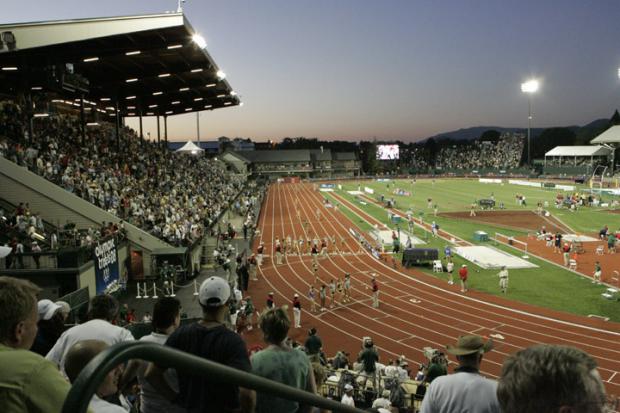 Only occurring once every four years, the US Olympic Track and Trials are a magical whirlwind of hopes, dreams, and years of hard work. For the very select elite, the Trials will be another day in the office and their eyes will be set on early August in Rio. Though for a large majority of the athletes competing, the ten days in Eugene will be the highlights of their careers.

While they may have long since left our hometown tracks and cross country courses, Massachussets fans will still have a strong contingency of eight native athletes representing our state on the sport's biggest stage. Making sure you stay well informed over the course of this action packed event, we're providing you with a complete rundown on all eight MA athletes and their potential shot at a spot in Rio!

She never once was a state champion or New England champion or even a D4 champion, but that probably doesn't mean much to Carly Muscaro these days. As now a rising senior at Merrimack College, Muscaro is a two-time DII National Champion in the 400m and put herself at #3 on the all-time D2 list with her 51.17 performance at the Open New England Championship in May--pretty impressive given the fact that Muscaro graduated from Ashland HS with a personal best of 58.16. Getting down to business tonight in the 400m Prelims, Muscaro will have her hands full with the likes of Sanya Richards-Ross, Dee Dee Trotter, and Courtney Okolo. Although possibly being the toughest prelim to advance from, the Ashland native should just look to pick up a few pointers and enjoy the experience. As we're positive we will be seeing a lot more of Muscaro in the years to come!

After claiming the javelin title at the All-State Outdoor Championship in 2010, Ouellette of Brookline packed her bags and headed north to the University of Vermont. Over the course of her four years as a Catamount, Nika established herself as one of the finest track and field athletes in UVM history. She would make a clean sweep of the America East javelin title from 2011 to 2014. In 2012 and 2014, Ouellette made it to the NCAA Championship and claimed All-American honors. Her senior year in 2014 would extra special, as she set the UVM school record with a hurl of 50.01m and earned the highest finish at the NCAA meet in program history by taking 13th place. Since graduating from UVM, Ouelette has been continuing to throw it deep, putting up a big personal best of 51.47 earlier this spring. No stranger to the magic of Hayward field, Nika should be well prepared to hold her own against the nation's finest throwers.

"Gabby is a threat to be a high level scorer on the track and in the field." That is what Harvard Associate Head Coach Kibba Tolbert said about Gabby Thomas as she entered Harvard this past September. Well, Thomas's freshman year has come to a close and she has certainly lived up to expectations. At the prestigious Indoor Ivy League Hep Meet, Thomas won the LJ, 60m, and 200m to help the Crimson Women capture their fourth-straight team title. This outdoor season, Thomas been nothing less than an exceptional. At the Heptagonal Championship, Gabby was member of the winning 4x1 squad and won both 200m and 100m titles. Capping off her first year as a collegiate athlete, Thomas saved the best for last and ran 22.47 to take 3rd in the Women's 200m at the D1 NCAA Meet. No matter what happens in the 100m and 200m, Thomas has a very bright future as one of the top sprinters in the US!

Starting her throwing career at Wachusett Regional High School, Lisa Wilson made the short trip west in 2006 to continue throwing heavy things far at the University of Massachusetts in Amherst. Over her four years as a Minutewoman, Wilson absolutely owned the throwing circle in both indoors and outdoors. Still to this day, Wilson has the Indoor school records for the shot put and weight throw, while also still owning the Outdoor school records in the shot put, hammer, and discus. As one of the finest collegiate throwers in state history, Wilson has continued her post-collegiate career by competing for the Greater Boston Track Club and has improved her personal bests to 66.15m in the hammer, 52.18m in the discus, and 15.25m in the shot put.

For all the youngsters, Sean Furey is an Olympian and US National Champion from Methuen. While we don't blame you for possibly knowing the name, as Sean graduated from Methuen in 2000 and then went onto compete at Dartmouth. He is certainly someone you should familiarize yourself with for these upcoming trials. During his time as a member of the Big Green, Furey set the school record with a throw of 73.84m, won the Heps Javelin title his senior year and finished 3rd at the 2005 DI NCAA Championship. He would compete on the national and international stage post college and his first big success would be his victory at the 2010 US Outdoor Championship. The Olympic year of 2012 would eventually come and Furey rose to occasion by meeting the Olympic A Standard with a personal best throw of 82.73m two weeks out from the US Olympic Trials. Despite his eventual fourth place finish at the trials, Furey secured a ticket to Rio due to the top two finishers not meeting the standard. The major highlight of Furey's career came last year when he took his 3rd US Title with a personal best throw of 83.08m. While there may be some tough youngsters in the field, Furey's seniority should carry him far and possibly to Rio!

Taking his talents to Columbia University after a very respectable high school career at Seekonk, Johnny Gregorek grew into a national threat over the course of his four years in New York City. Major highlights include his 6th place finish in the mile at the 2014 Indoor DI NCAA Championships, as well as an Ivy League title in the Steeplechase (2013) and two runner up finishes in the 1500/Mile. Taking advantage of his extra eligibility in both indoor and outdoor, Gregorek headed to Oregon in search of fast times. Well that is exactly what got from the Seekonk native, as he dropped his mile PR down to 3:57, ran a quick 7:54.85 in the 3k, and earned a national title as a member of Oregon's National Champion DMR squad. While this will be Gregorek's first time at the Olympic Trials, he should be receiving plenty of good advice from his father, John Gregorek Sr., who was a world class miler and steeplechase runner in the 80s.

It wasn't until her junior year at Dartmouth, when Megan Krumpoch competed for the first time in the 800m. With solid speed in the 200m and a solid 400m PR of 56.46 from her sophomore season, Krumpoch put up a modest performance of 2:10.3. There wouldn't be anything too noteworthy during that outdoor season, as she was still competing well in the 400m and 400H. Though during the winter of 2014, the Shrewsbury native found her sweet spot when she dropped her 800m pr down to 2:06.31 at the BU Terrier Meet. A few weeks later in March, Megan really turned some heads when she took the HEPS 800m title with a new PR of 2:05.56. That indoor season would be capped off with her earning All-American honors as a member of Dartmouth's 8th place DMR and a 6th place individual finish in the 800m. Closing out her collegiate career that spring, Krumpoch defended her indoor 800m HEPS title and also took the 400H. Once again earning a spot at the NCAA D1 Meet in Eugene, Megan really showed her stuff on the season's biggest stage and finished with a new PR of 2:03.82. Since competing for the Big Green in Hanover, Krumpoch has returned to Massachusetts and has continued to excel under the tutelage of MA legend, Mark Coogan. Recently setting her lifetime best of 2:02.58 at the Adidas Boost Boston Meet in Somerville, Krumpoch is heading to Eugene in high spirits and should be ready to excel.

For all of us track fans in Massachusetts, Abbey D'Agostino is nothing more than a household name these days. A native of Topsfield, MA, who posted modest high school performances throughout her time at Masconomet Regional, she began to really sing once she stepped foot on the Dartmouth campus. While her transformation to one of the nation's best distance runners wasn't overnight, she still was an Ivy League champion and NCAA All-American by the end of her first year at Dartmouth. Sophomore year would be another demonstration of immense growth, as D'Agostino placed 3rd at the NCAA XC Championships, took 8th in the 3,000 at the Indoor Championships, and won the 5,000 outdoors. A few weeks after her winning 5,000m performance at the NCAA D1 Championships, Abbey returned to Eugene to finish 5th in of the most thrilling performances in history at the US Olympic Trials. The second half of her collegiate career was marked by more NCAA Championship victories--perhaps the biggest being her NCAA XC title in 2013, which made her the first Ivy League athlete to win the cross country championships. A few years removed from her collegiate career, Abbey is now a prominent fixture in the New Balance Boston group. She had a terrific 2015 outdoor campaign, which was highlighted by her 3rd-place finish at the US Outdoor Championship, which earned her a spot at the 2015 World Champs. Prior to Worlds, D'Agostino clocked in a lifetime best of 15:03.85 in Belgium. Only racing the 5,000m once this outdoor season, Abbey ran 15:22.29 a few weeks ago at the Adidas Boost Boston Games. Despite being only 24 years-old, Abbey D'Agostino is heading to Eugene with veteran experience and an Olympic Trials already under her belt. There will certainly be a lot of talent toeing the line in the Women's 5,000m, but Abbey has shown she has what it takes and is certainly in contention for punching a ticket to Rio.