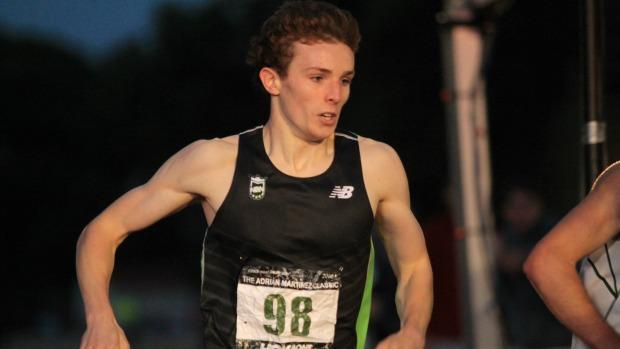 Making your way across the Emerson Playground fields last night and taking in the scene, I'm not sure there could be a finer sight for fans and athletes of our sport. The Emerson track is certainly no Hayward Field or Franklin Field, as it's a quaint, six-lane oval located right in the middle of a Concord neighborhood. Though over the past few years the Adrian Martinez Classic has been able to perfectly balance a wonderful community event as well as a high caliber track meet and that's exactly what we witnessed Thursday night.

Making the evening festivities even more special was the expected performance of hometown favorite, Thomas Ratcliffe, in the Men's HP Adro Mile. The excitement surrounding Ratcliffe was quite apparent as the night wore on and, though it got a bit chilly, more and more people lined up around the track in Concord Carlisle HS apparel. Shortly after eight o'clock and an exciting finish in the Women's HP Adro Mile, we would begin to hear the line up of the competitive men's field. Eventually Ratcliffe's name was announced and as he made his way down to the start, the Concord senior would receive by far the biggest roar from the Emerson field crowd.

Getting underway safely in the crowded sixteen-man field, Ratcliffe tucked in at the tail end of race and appeared comfortable as he hit the first quarter in sixty flat. Things wouldn't change too much for Ratcliffe as the race got to the halfway point in just under 2:00 for the leaders and approximately 2:01.7 for Thomas. Realizing he would need to get down to work in order to have a shot at that elusive 4:00 barrier, Ratcliffe began to move up strongly at the 1K mark and had latched onto the lead pack by the bell.  As the home crowd began to come alive in the last lap, Ratcliffe would try to make one more strong push with just over 200m to go. He hung on valiantly in the final homestretch and as Sam Penzenstadtler of the District Track Club took the win in 3:57.8, we knew Thomas would be ever so close to that magic time. Perhaps it was just an ironic flair of drama, but a few seconds prior to Ratcliffe's finish the large time clocks on the infield had cut out and left the crowd momentarily in suspense. Though luckily we would not have to wait long and eventually learned the Concord native had clocked in at a superb 4:01.50.

Yes, Ratcliffe didn't dip under 4:00 and didn't become quite astonishingly the 3rd high schooler this year to go under four minutes. Yet perhaps Ratcliffe served a greater purpose last night and helped us put in perspective the astounding growth of talent in our sport at the HS level over these past few years. Despite missing entering the exclusive sub-4:00 club, Thomas is still in elite company by eclipsing the MA state record and New England record set by Garrett O'Toole (4:01.89) at the same meet in 2014. Post race, joined by dozens of friends and family members, Ratcliffe appeared to be quite content with efforts for the evening. Highlighting the thrill of being pulled along by the pro field and the unbelievable support he received at his home track, he never once hinted about the disappointment of dipping under 4:00.

Displaying maturity both on and off the track, Thomas Ratcliffe has little less than forty-eight hours until he makes his return to the track for Saturday's All-State 2 Mile. No doubt the hands-down favorite, an attempt at the forty-one-year-old meet record of 9:00.0 set by Alberto Salazar is not off the table. Though record or not, Thomas should still give us quite a show and create quite a memorable weekend.