The long jump, like a fair amount of events in our sport, is an incredibly complex series of movements for the sake of achieving a simple mark, a distance measured from the takeoff board to the closest indent the jumper leaves in the sand. Jumpers, like myself, spend countless hours tuning these movements in order to maximize their potential. Refining your landing, your midflight mechanics, keeping your head up; certainly, there are things you can do mid-jump to make sure you don't lose distance.

That being said, the reality is that most of a jump (about 90% of the distance covered) is decided during the takeoff. When we plant our legs and launch ourselves upwards, we redirect our horizontal speed (from driving down the runway) into a new vector of velocity. This velocity is determined by two things: the speed you are able to redirect and the angle at which you are able to redirect it. This velocity, as it has an elevated angle, now comprises two components: a horizontal velocity, and a vertical velocity. Jumpers will often incorporate different techniques, such as the hitch kick or the hang, in the hopes that they will be able to further their marks, but they cannot change the projectile nature of a body that has already left the ground. Jumpers employ these techniques in order to keep their trunk stable while in flight and to delay their first contact with the ground as much as possible. With that in mind, it's important to know that the only force left to act on a jumper once they are in the air is gravity; thus, once we've taken off, we are no more capable of changing our trajectory than a cannonball that has already left its cannon.

Gravity is the enemy here. The horizontal component of your velocity remains constant throughout a jump; you will travel forward at the same speed until you collide with the ground. However, your vertical velocity will experience an immediate deceleration (at a rate of about nine point eight meters per second squared), or g. This acceleration is gravity's contribution to a jumper's flight. It is because of this acceleration that most jumpers actually experience very little airtime, often around three-quarters of a second. Given this reality, every hundredth of a second a jumper remains in the air is important. The longer the jumper can be carried forward by the horizontal component of their velocity, the farther they will travel. This concept raises an interesting idea about pit conditions at the high school level.

As high schools have begun to modernize their multiuse facilities, long jump pits will often be covered with heavy metal covers afterhours. Their presence requires that the sand level be heavily recessed in order to allow for them fit snugly into place.

It's commonly accepted that a deep pit (that is, a pit that is not filled entirely with sand) is more favorable for jumpers. Most people will acknowledge that landing in a depression will give jumpers a few extra inches. In my own experience, I've found deep pits yield huge advantages to jumpers, ranging from a few extra inches to more than a foot. Using one of my own jumps in a level pit as an example projectile, I set out to see if I could come up with a kinematic equation that might help me look into the effect landing at a lower elevation than one's takeoff might have on the distance one is able to jump. This next section of this piece contains some mathematics and physics work for the sake of deriving a formula that will represent the parabolic arc of a specific long jump of mine. Feel free to skip down to the following section to see the conclusions drawn from the pit depth analysis.

This jump was 6.45 meters long, or about 21' 2''. Using a digital clock and going frame by frame, I was able to measure the time I was in the air to the hundredth: 0.73s. These two small bits of data may seem unimportant, but they actually allow us to make a variety of calculations for the jump using kinematics and trigonometry. Firstly, there is a very simple calculation for my horizontal velocity: distance = (velocity)(time).  Since we know the distance traveled (6.45m) and the time it took to cover that distance (0.73s), we can solve for my horizontal velocity, which I'll refer to as V(x): 6.45 = 0.73x;   x=6.45/0.73 = 8.836m/s. Then, using a kinematics formula:

it's fairly simple to find my vertical velocity: V(y)= 3.577 m/s. From there, the Pythagorean theorem is sufficient to recompose my V(x) and V(y) into V(i), which refers to my initial takeoff velocity upon leaving the board. This comes out to around 9.495 m/s, and using some trig (taking the inverse cosine of the ratio of my actual velocity to Vx), we can find that the angle at which I took off was 0.385 radians, or ~22.04 degrees. This might seem like a low takeoff angle, but it's only slightly under the average (it takes significant leg strength and a proper set up in the penultimate step to start pushing a 25-degree takeoff, given the full speed nature of the approach). My set up in this example is mediocre.

At this point, I have all the data needed to illustrate the projectile nature of my jump. Currently, the data describes a literal situation in which I take off 0 meters above the ground, and land at the same point (on a horizontal plane) of 0 meters above the ground. Using the takeoff velocity I've calculated, though, we can begin to look at the idea of a deep pit situation by manipulating some equations. By using a quadratic equation (which mimics the parabolic trajectory of flight) involving V(y) and the gravitational acceleration (g), we can think about the added flight time one might experience by falling a few extra inches into a long jump pit. Using this data table, and the quadratic equation derived from it, we can look at a graphed version of the jump.

If you direct your attention to the y-axis of the jump, you'll notice that it extends under the origin, to negative one meter. This is supposed to be representative of hypothetical pit depth. The orange line sits at a depth of eight inches, or around 0.2 meters. This graph provides a visual for the concept of the depth advantage. As the parabola (representing my jump) extends downwards, towards the 8-inch recession, the x-axis, or the total distance traveled, begins to approach 7 meters. This parabola shows just how drastically pit depth can aid the average jumper. Underneath, I'll lay out a few tables showing pit-aided benefits as a function of hypothetical pit depths.
Pit Depth: 2 inches, or ~0.05 meters
Pit Depth: 4 inches, or ~0.10 meters

After a quick glance at these charts, it's clear that for each inch of pit depth, a jumper can gain over two inches of distance for their jump total. Of course, this data will vary from athlete to athlete, but it is accurate enough to show that a pit-aided jump is not an accurate representation of a long or triple jumper's ability. Recessed pits are often more than four inches deep, which offers a mathematical benefit of over a foot according to our calculations. If we take a look at some rankings, we can see just how outrageous this benefit is. Firstly, in my home state of Massachusetts, a benefit of ~twelve inches is the difference between the MA #1 jumper and the MA #14 jumper. If you subtract that same benefit from the 14th ranked jump of 20 '5.5, it becomes the difference between the 14th ranked jump, and the 50th ranked jump.

If we look at the national rankings, this difference is exponentially larger. The 50th ranked jump in the country is a jump of 22 '0. If we assume that one of these jumpers tied for 50th performed in a recessed pit, we can see that their rankings advantage would've been a jump from 145th (21 '0), to 50th (22 '0). The fact of the matter is this: recessed pits cause distance inflation. This can translate to harsher qualifying marks for athletes, as well as athletes qualifying for larger meets with marks that are not true representations of their ability.

So what can be done? In sprinting (and in the jumps), the wind speed is monitored and reported with results. Races or jumps supplemented with a wind speed of more than 2.0 m/s are not legitimate qualifying marks, and are not candidates for meet records. Something similar can be done with pit depth. Perhaps jumps in pits recessed by more than two inches can be labeled as pit-aided, and disqualified in a similar manner to wind-aided jumps or races. Schools can pay attention to their pits when they host meets, and take steps to ensure they are as level as possible. Those responsible for maintaining pits during competitions can pay attention to how they rake the sand. If pits are raked unevenly, recessions can be formed. Conversely, if sand is piled in a dune, jumpers can lose distance. Overall, more discussion should take place about this very legitimate problem in high school track and field. 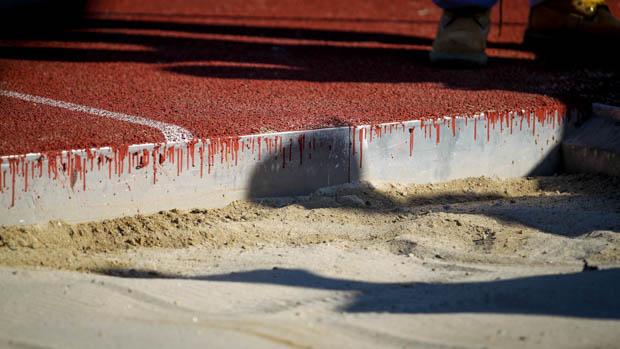 Pictured above: one of the long jump pits at Newton South High School. The panoramic shot earlier in the piece depicts one of my jumps in this pit from 2013. As you can see, the pit is about five inches deep, and has gained notoriety from the depth-benefit it provides jumpers.

Editor's Note: The author is a senior co-captain on the Newton North High School track team in Massachusetts, and also competes for the Waltham Track Club. He is the defending MIAA D1 Indoor Long Jump Champion and a two time Bay State Games and USATF Junior Olympic Region 1 Champion. He will attend Bowdoin College in the fall.