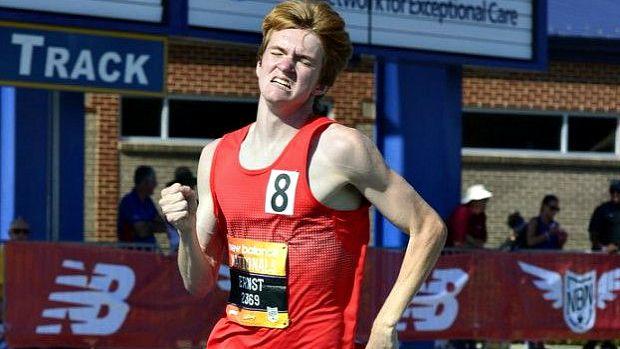 Andrew Ernst appears to be just an ordinary runner.

The Marblehead High senior-to-be averages a modest 50 miles per week with a few speed workouts incorporated into his weekly schedule. He also has a calm demeanor when talking about his running and approaches every race as just another opportunity to improve on his PRs.

Even though he may seem it, the 17-year-old Ernst is not just an ordinary runner. In fact, he’s far from it.

He’s proven it throughout his career at Marblehead and, on one special Thursday night last month, he proved it against some top-level competition.

Running against collegiate and open athletes at the ultra-competitive New Balance Twilight Invitational on June 19, Ernst finished third overall among the stellar field. More impressively, he ran a 10-second personal best of 3 minutes, 47.88 seconds at the Bentley College facility, a time that firmly places Ernst at No. 6 in the national rankings.

Finishing ahead of the Marblehead runner at the Twilight meet were two ex-collegians, Christian Gonazalez, a sub four-minute miler, formerly of Rider University, and onetime Georgetown standout Michael Reher. Less than two seconds separated the trio.

Ernst’s performance at the Twilight Invite has certainly put him on the national radar and signifies that the potential is there for some great things on the cross-country trails and track oval his final year at Marblehead, beginning this fall. He’ll be among a short list of returning senior stars from the Bay State, a list that also includes Concorde-Carlisle’s Thomas Ratcliffe, a 4:07 miler, who ran 3:49 for 1,500m at a Twilight meet in mid-May.

But the runner who competes for the same small school that Olympic 10K bronze medalist Shalane Flanagan once attended, would be the first to say that his success doesn’t surprise him.

That’s not to be interpreted as cocky or boasting. Rather it’s more about confidence in your ability; knowing that if things are done right, if the effort is put in each week with an aim towards improvement every time you’re on that starting line, the path to success will be less difficult.

“I am just a competitive person and I like the idea of it,” he said. “I just like running.”

Ernst’s first began running his freshmen year where he instantly showed promise as a ninth-grader. It started with a two-mile leg at the annual Clipper Relays where he ran an above-average time of 10:30. 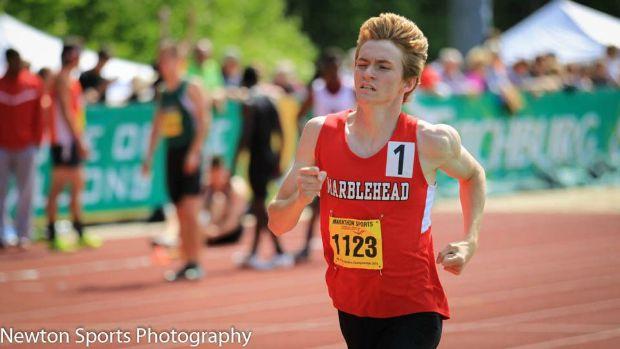 Ernst’s concluded his cross-country season by finishing 26th overall at the MIAA State Meet. He also had a best for the 5K distance of 16:36.50, which he did to place 12th at the Eastern State Championship a week earlier. He also had a mile best of 4:44.94 his freshman year.

Ernst’s times dropped significantly his next two years at Marblehead. He was a runner-up to Newburyport’s Nick Carleo at the Division II All State X-C Finals this past fall, a meet his third-place squad was just seven points away from team champion, Hopedale.

“Nick was way ahead at the start,” Ernst said. “I was just in a pack competing for second.”

Ernst was second in the mile at the Div. 4 state championship this past indoor season and was 13th overall at NBNI meet where he was clocked in 4:20.76.

“I made my move a little too early,” he said, referring to the indoor nationals. “I was still pretty happy with my race.”

Ernst had one minor hiccup during his outdoor campaign this year where he struggled to last place in the championship mile of the Penn Relays Carnival with a time of 4:42.59, a race he was counting on for a strong performance against the talented runners that toe the line at the prestigious meet.

“It was a tough day,” he said. “I (hurt) my heel a day earlier and my training probably wasn’t as well put together as I would have liked. I took a step back and started focusing for the end of the season.”

The Penn Relays, held April 23-25, appeared to light a spark for Ernst, who went on to win the MIAA Div. 3 Eastern and All State crowns in the mile, both with sub 4:20 efforts. A week after the All State Meet, he ran his 3:47 at the Twilight Invite.

In that race, he utilized a patient approach. While the rabbit took the leaders through an opening 1:57 at the 800m mark, Ernst was near the back of the pack and hit his half-mile split in 2:02.

“I was confident. I knew what I was going to do,” he said. “I figured like that last 300 meters to make my move and I passed like four of five runners. I really want to get a time under 3:50.”

Ernst just missed out on a podium placement in the mile at the New Balance Nationals this past June where he finished seventh with a time of 4:13.50, just .32 of a second from sixth place. With a strong kick the last straightaway, Virginia’s Matthew Novak won the race in 4:09.23.

Ernst was battling for second until a mishap occurred the final lap.

“My goal was to compete and do as well as possible,” he said. “I tripped on a rail the last 200 meters and went from second to fifth. I lost a few strides.”

Ernst is taking one season at a time in preparation for his senior year at Marblehead. He’ll be one of the leading contenders for individual glory during the upcoming cross-country season, but that’s not his only goal.

“I just want to get some big PRs and help the team win a state championship,” he said.