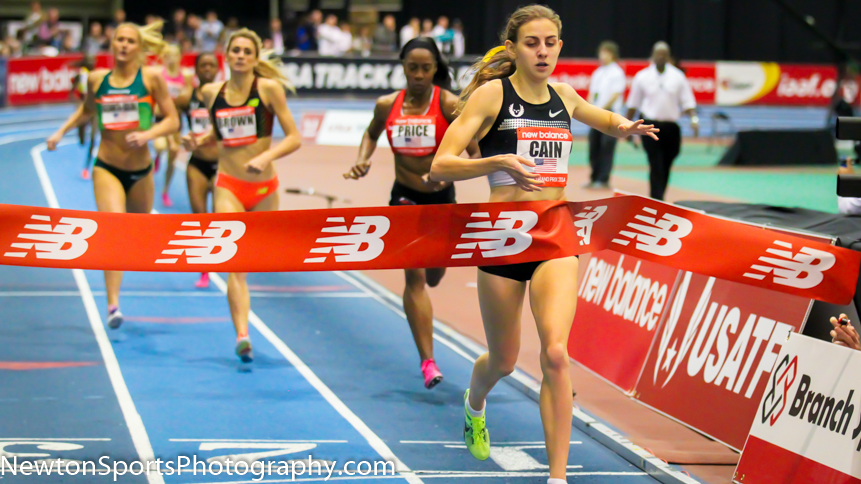 BOSTON, MA- Each year, the first weekend in February results in the fixing of all eyes on Boston's Reggie Lewis Center for the New Balance Indoor Grand Prix, an opportunity for some of the world's best track and field athletes to showcase the midseason form their indoor seasons might have brought. The main event for the future of American distance running came in the women's 1000 meters, with Bronxville's (NY) Mary Cain, just 17 but already under the tutelage of Alberto Salazar's Nike Oregon Project, battling another teenage sensation in Ajee Wilson, as well as a star-studded field that included. Cain appeared surprisingly comfortable through a 29.3 opening lap, and a 60.3 opening quarter, trailing only the race rabbit and Treniere Moser, the 2013 U.S. 1500 meter champion. With only a slight dip in the pace during a sharp third lap, Cain never hesitated to surge by Moser during lap number four. The contest became tighter as Cain surged, with race favorite Chanelle Price challenging her at the 500 meter mark, and Sarah Brown and Molly Beckwith making overtures of their own. Cain, after a 2:04 half mile, never budged, never seemed to notice the oncoming traffic behind her. The crowd noise was numbing, the energy was palpable, and the teenager didn't seem to notice or care. She has the composure of a concert cellist and the steady hand of a surgeon. When the dust had cleared and the crowd stopped cheering, the world junior mark (2:39.25) she set a month earlier was shattered, Cain surging to a 2:35.80 time, ahead of Price by nearly a second.

While Cain was whisked away right after the race, the crowd had begun to gather around the athlete support area, high school kids looking to catch a glimpse of their peer, albeit one who is without peers. Cain has done it. Rather than being yet another athlete with scores of the "P" word, potential, she has much more than that. Cain has a quiet confidence to her that will take her to a level American distance running has never seen before. Simpson, Flanagan, Goucher and the rest have it, have the work ethic, and have the mental makeup. But Cain has a level of talent and fearlessness that gives her an edge. Price, Moser, and Beckwith should have been feared by the wunderkind, but after just over a year of professional running, she is wise beyond her years. She is gutsy beyond her years. Under Salazar's tutelage, more records will fall, more jaws will drop, and more kids will gather around athlete areas looking for a glimpse, just one glimpse, of the greatest American distance runner since Steve Prefontaine.

While all scholastic eyes in the Reggie Lewis Center might have been on Mary Cain's effort at bettering her own World Junior mark in the 1000 meters last night, a score of high schoolers had their say long before the 17 year old phenom took the track.

A stacked field in the girls sprint medley relay made up mostly of Massachusetts teams, including Lexington, Hingham, Notre Dame Academy, Dracut and King Philip, plus Bishop Guertin of New Hampshire, made its way to the track first. Hingham's Sierra Irvin opened up the show with a sub-55 400 meter split, leaving a substantial gap, and giving her team the job of holding off a serious group of anchoring half-milers behind her. The 200 legs of Olivia Cundari and Kate Freda maintained, but no gap is safe from Lexington's Olivia Manickas-Hill, Dracut's Karina Shepherd, or Bishop Guertin's Molly McCabe (who took the stick well back in 6th).

Hingham anchor Leah Hickey hung on to the lead as long as she could, but the final lap, featuring three girls who had come through 600 meters in well under 1:40, was all about guts and heart. Manickas-Hill made the first move, pulling Shepherd with her at 150 meters to go, when it appeared that McCabe and Guertin might be cooked. The surge from McCabe with 100 meters to go was what track fans pay to see, a tired, tough stride that simply wanted to win the race more than anything or anyone else. Guertin got an unofficial 2:09 split from McCabe, as well as the win in 4:09.35. Lexington rode Manickas-Hill to the runner-up slot in 4:10.22, thanks to a mega-race from the anchor, as well as a strong 200 leg from Melissa Solomon earlier on. Dracut's (4:11.75) Karina Shepherd made a push in 2:12, but with a 2:49 1000 meters in her legs from the previous night's Merrimack Valley Championship, more was too much to ask.  King Philip saw Olivia Weir make a push as well, and the team ended up 4th in 4:12.86. 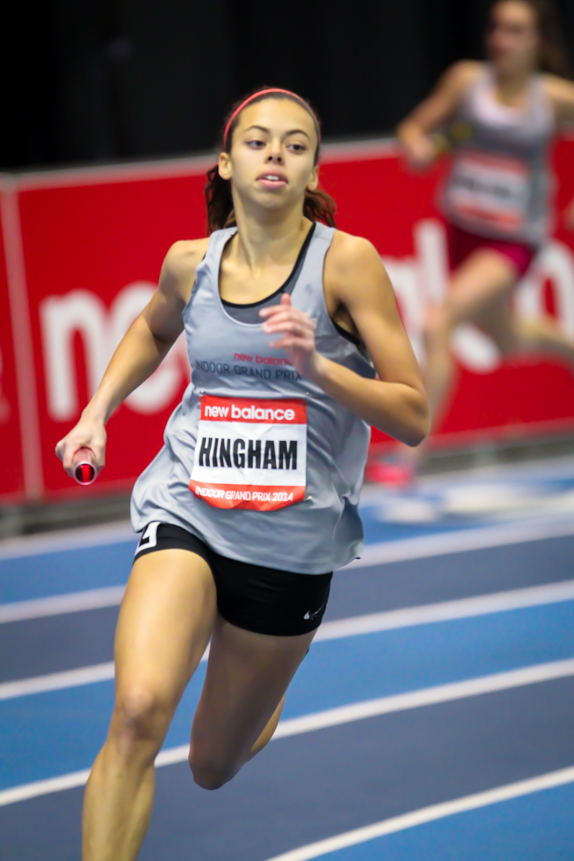 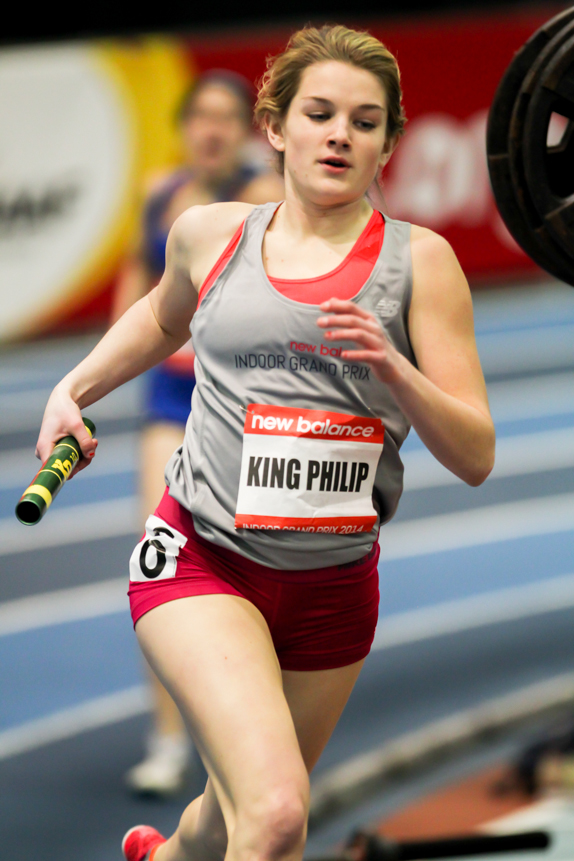 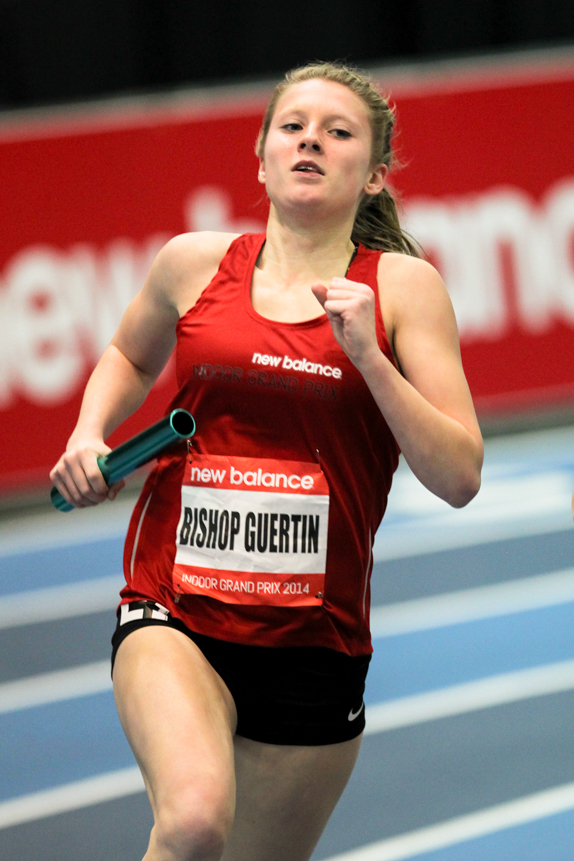 The boys toed the line in the distance medley relay next, featuring some of Massachusetts' best squads, Lexington, Marshfield, Mansfield, Needham, and Concord-Carlisle, plus teams from New Jersey (Pope John XXIII, Don Bosco), Pennsylvania (West Chester Henderson), and Rhode Island (LaSalle Academy). An opening surge from West Chester Henderson (3:07) created some early separation from the rest of the field through the 1200, but LaSalle Academy's Matt Bouthilette (3:10), Needham's Tommy Kelley (3:10.8), Marshfield's Mike Tautiva, and Lexington's Ethan Isaacson led a chase pack that was just close enough to make the race far from over. With little change taking place over the 400 and 800 legs, the accordion effect so typical of a high school distance medley took over.

With West Chester Henderson closing in on LaSalle anchor Jack Salisbury, Salisbury made an aggressive move with 350 meters to go, later admitting he thought he was on his final lap. The gap he opened, penultimate lap or not, was insurmountable, and LaSalle ran the fastest time in New England this year in 10:24.10. The battle with 100 meters to go was for 2nd place, with West Chester Henderson (minus traditional anchor Tony Russell, who would run the boys' junior mile moments later) holding off Needham's Adrian Amaya (4:24) and Marshfield's Matt Meehan (4:25). WCH took the silver in 10:27.53, fractions of a second ahead of Marshfield (10:27.89) and Needham (10:28.31). Pope John XXIII (10:30.04) and Don Bosco (10:32.20) rounded out the scoring. 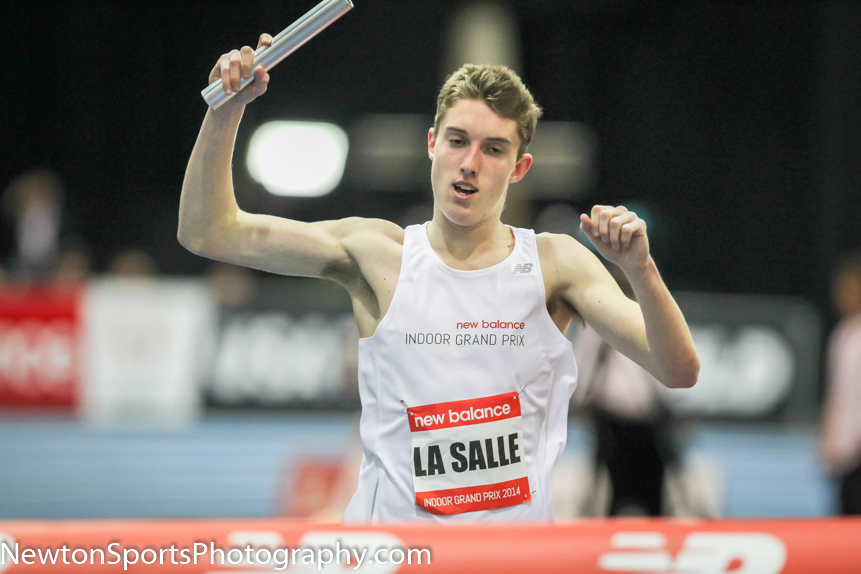 The boys' mile was next, featuring a battle between West Chester Henderson's (Pennsylvania) Tony Russell and McGill Academy's (Montreal) Charles Cooper. Russell led the way through the first quarter in a comfortable 63 seconds, but there was little separation in the field, instead featuring runners jockeying for position and space. Another 63 second quarter ensued, with Russell only slightly increasing his lead, while the field bided its time, and only partial gapping developing. Seeing his chance to pounce, Cooper climbed to Russell's outside shoulder at this point, and although another 63 second quarter made the race feel like Groundhog Day, the field began to tighten things up. Newton North's Gabe Montague took the bait, pulling teammate Mike Schlichting with him, as well as Idaho's Elijah Armstrong. The final lap was the first time the crowd saw anybody besides Russell leading, as Cooper took his chance with 150 meters to go. Russell responded calmly, pulling back even on the final turn, and using his superior speed to finish in 4:11.56, just ahead of a solid turn from Cooper (4:12.01). The Newton North duo of Montague (4:14.13) and Schlichting (4:14.57) made the claim of best teammates in the nation, and Armstrong (4:15.63) and Delaware's Jack Hagood (4:16.77) finished off the placewinners. Massachusetts' own Paul Hogan of Burlington (4:18.30) and Nick Carleo of Newburyport (4:18.58) made the home crowd roar. 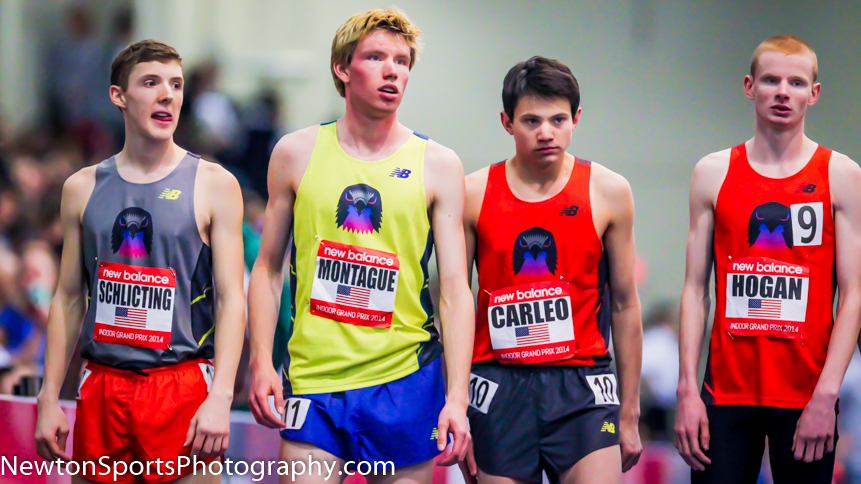 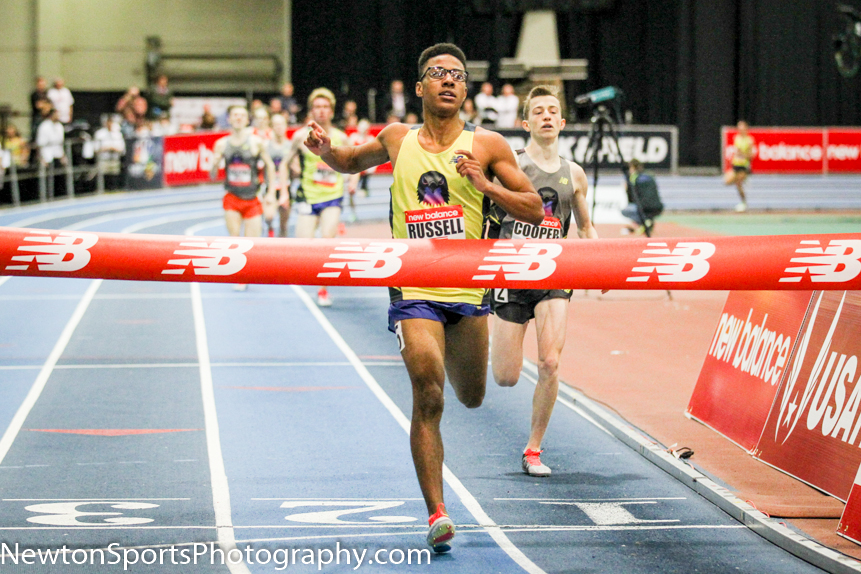 The girls' approach to the mile was much more tactical than the boys, with Maddy Berkson of Classical HS (RI) taking the lead from the gun, and dragging the entire field through a 71 second first 400 meters. From there, Berkson methodically increased her edge, gaining meter by meter with each passing lap. While the splits weren't eye-popping, no opponent seemed willing to challenge the Stanford-bound front-runner, until the final lap, when Berkson's gap was simply too wide to overcome. She took the win in 4:56.00, ahead of a surging Marissa Sheva of Pennsylvania (4:56.81) outleaned New Hampshire's Shannon Murdock (4:56.94), with North Carolina's standout Ryen Frazier (4:57.92) taking 4th. Audrey Belf (4:58.97) and Sam McKinnon (4:59.32) of Idaho rounded out the scoring. 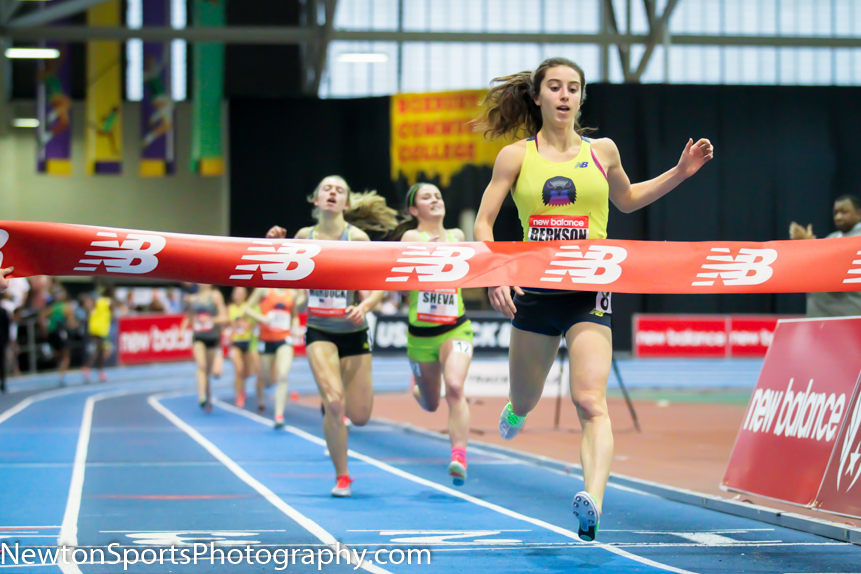