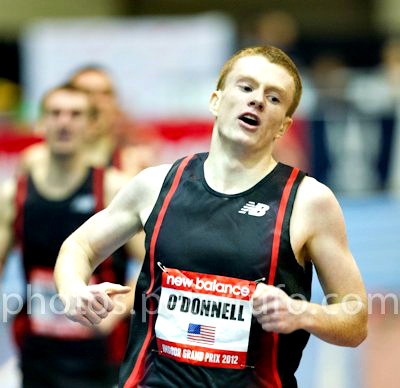 BOSTON, Mass. – Two-time American record-holder and Olympic silver medalist Galen Rupp will continue his mini tour of Boston when he competes in the 3,000-meter run.  Mary Cain, the 16-year-old running sensation from New York, will try and make history again when she lines up in the women’s two mile.

The atmosphere will be electrifying on Saturday night with some of the nation’s best athletes converging inside a sold-out Reggie Lewis Center for the New Balance Grand Prix.

Twenty-four of the finest prep milers in the northeast region will also get to experience the deafening noise that will radiate around the banked oval as competitors in the Boys’ and Girls’ Junior Mile. It will be a stacked field that will include several top New Englanders.

In the boys’ race, Methuen (Mass.) High senior Michael O’Donnell has to be considered one of the favorites for individual honors. O’Donnell, who ran the No. 1 time in the country (2:27.22) for the 1,000-meter run at last week’s MSTCA Elite Meet, will be making his second straight appearance in the race. In 2012, he improved on his then-best of 4:23 by six seconds, taking seventh overall with a time of 4:17.05.

“The crowd made a huge difference,” said O’Donnell, about last year’s event. “It just gets you going. It’s way different than any other meet.”

The Methuen runner will be relying on that energy from the fans in Saturday’s race.  He owns a PB of 4:15 for the mile and has a season best of 4:22, a time he ran to finish second behind another Grand Prix runner, Chariho (R.I.) Regional senior Bryce Kelley, at the Dartmouth Relays a few weeks ago.

“That wasn’t my best race,” O’Donnell admitted. “I know I can run faster. My goal right now is 4:10. It is definitely within my reach.”

The boys’ race will feature at least seven runners that have run faster than 4:20. O’Donnell is prepared for whatever pace the field dictates.

“It doesn’t matter,” he said. “I’ve done well in every type of race. I am ready for however the race unfolds.”

Kelley is coming off a strong third-place finish at the New Balance Games in New York City where he ran a season-best of 4:16.59. His time is not only the fastest run this year by any other runner in the field, but it is also one that qualified him for a trip to the prestigious high school mile event at the Millrose Games.

Unfortunately for Kelley, he had to decline that invitation because it conflicts with the R.I. state meet, held the same day. In essence, this weekend’s elite mile will be his Millrose.

“This is really good for him,” said longtime Chariho coach Bill Habarek. “It kind of will take the place of Millrose. It will all work out.”

Kelley has been busy this year. He entered his final season on the indoor track surface after placing second at the state cross-country meet and later earning a spot at the Nike Cross-Country Nationals.  Besides his win at Dartmouth (4:20.13) and his recent performance at New Balance, he was also fifth in the 800 at the Yale Track Classic where he ran a time of 1:57.61. Kelley, a member of the Chargers’ national record-breaking 4x1 mile relay squad, set at last year’s New Balance Indoor Nationals, is ranked No. 7 in the U.S. for the mile.

“He should be right in there,” Habarek said. “I am hoping that his best times are still to come.”

Rhode Island’s other entry, senior Trevor Crawley of Cumberland, earned his spot on the line based on his success for the longer distances. He’s the R.I. state champion for cross-country and was a Foot Locker finalist.  He finished fourth at Yale in the 3,000 with a PB of 8:42.93 and was tenth in the mile at Dartmouth with a time of 4:28.30.

“I just want to try to stick with the leaders and not do anything crazy,” Crawley said. “I just have to run my race and not really think of the other kids. I am hoping 4:20 or maybe a little less than that.”

“I think (Trevor) is just going to try and be respectable,” Cumberland coach Tom Kenwood said. “There are some really good milers in there. I don’t know what the top seed is, but Bryce (Kelley) ran a 4:16 last week. I don’t think he is much worse than Bryce is. I think he can go about 4:20.”

Connecticut will be sending Staples senior Henry Wynne. Wynne packs an impressive resume. He was second in the mile at last year’s NBON where he ran the quickest time in the field of 4:11.59. He was the New England indoor titlist in the 1,000 in 2012 and the New England X-C champion this past fall. Wynne won the 800 (1:54.86) at Yale this year and has a season-best of 4:22 for the mile, a time he ran in winning the SCC Coaches Invitational  on Jan. 12.

There is no question who will be the runner to beat in the girls’ field. The top seed by a substantial margin is North Carolina’s Wesley Frazier of Ravenscroft HS. The Duke University-bound senior and defending NBON two mile champion has a PB of 4:42.78. Frazier has a season-best of 4:48.33, a time that ranks the senior No. 2 behind the incredible national record of 4:32.78 set by Cain in the Elite Mile at the New Balance Games.

Northwest Catholic (Conn.) senior Sarah Gillespie appears to be the biggest threat to Frazier.  She was second in the mile last year at the NBON with a time of 4:54.79. She has a PB of 4:51.98 and 10:10 for two miles. She was seventh last year at the Grand Prix.

Hingham (Mass.) senior Julie McConville could surprise. Although she only has a best of 5:04.3, she currently ranks No. 1 nationwide in the two mile with a time of 10:27.3. Another runner from the Bay State that will answer the gun is Gann Academy junior Annika Gompers. The Waltham teenager is the daughter of former Harvard great and 2:11 marathoner Paul Gompers. She was tenth last year where she ran her PB of 5:04.93.

Rhode Island’s lone runner is La Salle Academy sophomore Sheridan Wilbur. The talented tenth-grader was the individual titlist at Dartmouth where she ran her current best of 5:02.72.

“I am hoping at the Grand Prix she is going to break five minutes,” said La Salle assistant/ distance coach Kelly Martin. “There will be some great competition. Some of the best runners from the northeast will be there. It’s really a chance for her to showcase her talent and test her true potential. She has a lot of potential. We want to see how far we can take it.”

Maine will also send a single runner to Beantown.  Senior Bethanie Brown of Waterville will try and improve on her best of 4:56.35. She ran that time at Reggie Lewis when she placed second in the New England Championships last year and became the first from the state to ever dip under the five-minute barrier.