McConville Shines Under the Lights 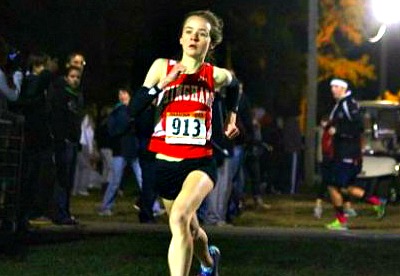 McConville shook Bishop Feehan’s Abbey McNulty by the mile mark in the small school division and it was a clear route to the finish over the fast, 3.1-mile Barnstable Fairgrounds layout. Her blazing 17:30.6 finish put her well ahead of Tyngsboro runner-up Kerri Keohane (18:06.03) and Renee Caps of Narragansett (18:18.04). McNulty finished fourth in 18:22.11 and Hopkinton’s Shelby Aarden rounded out a solid top five with an 18:34.13. The races were held under the lights on the fairground layout and attracted more than 2,700 harriers from Massachusetts.

McConville, who ran a 10:36 2 mile last winter, has been on a roll after missing the spring campaign to injuries. The Div. 2 state title race is shaping up as a dandy with defending champion Jordan O’Dea of Dennis-Yarmouth and Foxboro’s Liz Holmes in the mix along with McConville. She is concentrating on remaining consistent and preparing for the big November meets. “My coaches told me to run relaxed and I felt really good,” McConville said. “I’ve run more mileage and really trust my coaches. I’m trying not to go overboard. “There are a lot of great girls in Div. 2,” she said. “It’ll be great competition.”

Freshman Rebecca Grusby of Newton South had her defining race of her career to date in the large school competition. The tiny Grusby was at the front early and surged away from Falmouth’s Lauren O’Neil for an 18:22.27 victory. O’Neil finished strong in 18:39.14 and Needham's Margie Cullen sprinted to a third-place finish in 18:47.43. Lucrecia Aquilar of Newton South took fourth in 18:55.23 and Needham’s Caroline Turner crossed the finish line in fifth at 18:57.Grusby's prerace plan was to get out fast with teammate Anna Rhatigan (10th, 19:18.75) and force the pack to run hard to catch them. “I was following Anna and she said just start with me, we’re going to go out fast,” said Grusby. “The crowd was screaming that I had the race a little after the 2 mile. This was so fun. I’ve never done a race like this under the lights.” O’Neil, who was seventh in last fall’s Div. 2 state meet, was happy with her effort and believes she is on track to put up more solid performances in November. “I kind of went out and ran my own race,” said O’Neil. “She (Grusby) had a pretty good lead on me at the end, but I finished as hard as I could.”

Matt Herzig of Weston almost saw his race go up in smoke after being tripped up 100 meters into the small school event. By the time Herzig got back on his feet and into a rhythm he was near the back of the pack. Herzig refused to panic and moved up through the field and eventually took the lead at 2 miles. He surged across the finish line in 15:48.33, the fastest time of the evening. Herzig was all smiles after the race, oblivious to the cold temperature, as he spoke of his race and the fall.  “I just kind of covered my face and rolled a little bit,” Herzig shrugged. “When I felt people stop kicking me I got up and got going again. I was a little nervous but we talked before about not panicking at the start. I tried to stay calm. I wasn’t at the lead until the beginning of the third lap. I was with the top 25 at the end of the first loop. I was about 5:10 at the mile, but still a ways back. We’ve been practicing starts all week and I wanted to get out with the lead group. I thought I had it at the end. My biggest weakness is getting outkicked, but I’m working on that.”

Weymouth’s Nolan Parsley was in the middle of a small pack that tore through the opening mile of the large school race in a quick 4:45. Parsley continued to push the pace over the rolling course and emerged from the shadows for a big 15:49.43 victory. Owen Gonser of King Philip was right on Parsley’s heels in 15:50.23. Bishop Feehan’s Mike Hanley was third in 15:53.65 and teammate Evan Granfield was fourth with a 16:02.42. Aaron Klein of Brookline was fifth with his 16:11.21. Parsley felt in control the entire race and wasn’t worried about a kick finish against Gonser. “I felt pretty comfortable at the mile,” he said. “There was someone right there with me on the last lap. I was hoping my kick would be enough to win it.”

Jamison Koeman of Whitinsville Christian owned the sophomore race, pulling away from Weston’s Connor James over the final mile for a 16:24.73. Connor took second in 16:28.76 and the Oliver Ames duo of Connor Donovan and Cam Gardner ran hard through the last mile to take third and fourth respectively in 16:46.66 and 16:51.56. West Bridgewater’s Adam Petti took fifth in 16:51.83.

Koeman was very much aware of the talent on his heels, but was confident he had enough left for a last-ditch sprint if necessary. “I think I could have beaten them if they came up on me,” Koeman said.

Durfee freshman Carter Whitty was content to lay back in the pack through a 5:32 mile before taking the lead. Whitty never slowed and outsprinted Blackstone-Millville’s Zach Taylor for the 11:24.26 win over the 2.1-mile track. Taylor was in the finish line photo at 11:24.64 and Holyoke’s Bryan Dec was third in 11:51.45. Brendan Nichol of Marshfield took fourth in 11:52.67 and Bishop Feehan’s Andrew Sharples clinched fifth in 11:54.90. Whitty’s conservative first mile made the difference. “I wanted to let them go,” he said. “I didn’t want to die out quick. Those guys went out way too fast. I was fourth at the mile and I could see they were slowing down. I made my move right there.”

Like Whitty, Holliston’s Madison Ward also settled into a comfortable pace the first mile of the freshman race. She passed the mile in sixth place and began to focus on the runners just in front of her. Ward held off Melissa Lubas of Beverly for the 13:20.05 win. Lubas was 30 yards back in 13:25.15. Callie Schadt of Nauset took third in 13:34.25 and Alyssa Murray of Walpole was fourth in 13:36.54. Bishop Feehan’s Megan Carmody was fifth with a time of 13:38.42.

“I thought I could go a little bit faster on the second loop,” said Ward. “I took it on the downhill.”