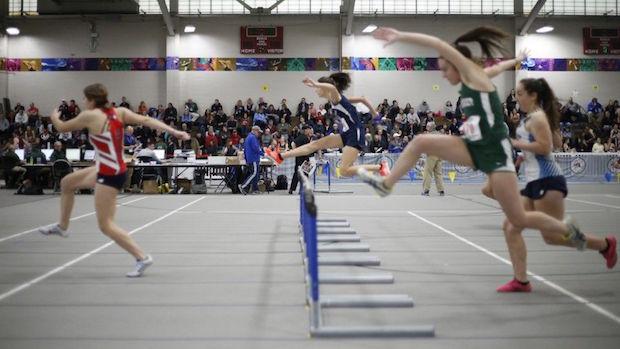 The Manchester Essex High School sophomore navigated the straightway with a crisp, 7.31 clocking; joining Sarah Militano (Nashoba Regional HS) and Tiffany Chaplin of Wayland High School who registered equal times in 2013 and 1996 respectively.
"I was very nervous but excited as well," said Hase who is competing in her first indoor campaign and for the second time at 55m. "The girls here are more competitive than our normal meets so at the line I took a few deep breaths and just went for it."
Following a false start in the field, Hase got out rapidly, maintaining and ultimately holding off a hard-charging group to the line. Second place went to Nauset's Monique Malcolm who crossed in 7.38. Julia Beauvais notched the top spot among the frosh contingent, finishing third in 7.54.
"I thought it helped me in a way, it got my adrenaline going," she said.
Like Hase, Seekonk's sophomore Andrew Cabral kicked started the distance disciplines in fine fashion, churning to a 4:33.26 in the Boy's Mile. Cabral, who racked up a victory in the Boston Holiday Challenge in the two-mile (9:42.41) moved to the lead from the gun before responding to a strong challenge with about 200m to go from eventual second-place finisher William Kenney of Manchester Essex who finished in 4:33.79."I was pretty confident because when someone passes me they keep going until they have a lead" Cabral said.  "He passed me on the last lap and just went in front of me. I was pretty confident [in my kick] though."
On the runway, Murdock's Alexia Allard proved best among a trio of 16 ft long jumpers in the field; winning with a distance of 16-11.50. Triton freshman Julia Beauvais edged Bromfield School's Claire Stoddard for second place, 16-07.00 to 16-03.00. Justin Thira's 19-08.00 effort assured the Murdock sophomore top slot in the long jump. In the girl's shot put, Uxbridge's Lyonna Dinsmore scored a meet-best 35-09.75.
Millis soph Bethany Steiner distanced herself from the remainder of the field early on in the girl's mile (5:17.38) and Narragansett's Kylie Marion secured the two-mile in 11.57.01.
Whitinsville's Joseph Thumann and Groton-Dunstable freshman Toby Drislane went 1-2 in the boy's 1000m, with times of 2:42.83 and 2:48.16 respectively and Keegan Gleason was first to the line in the boy's two-mile in 10:28.68.