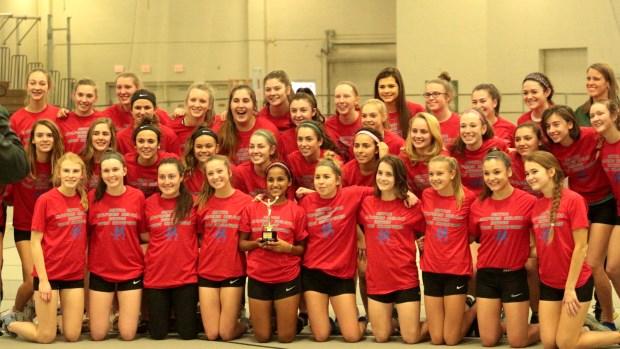 Just a year after winning the Division 5 title, the girls from North Reading were back to their winning ways at the Division 4 State Relays on Saturday. The Hornets managed just one victory, but their depth prevailed in a convincing 48-30 triumph over second--place Pentucket. Medway was third with 28 points.

"Our goal was to win," said NR coach Sotirios Pintzopolous. "I know we went up a division and had to go against some bigger schools, but all year we have be training for this. We have a lot of depth on this team and everyone knows this is the depth meet."

North Reading's lone victory came in the long jump where the Hornets came less than three inches from a meet record with a distance of 48-8.75. Medway also cracked 48 feet with a 48-2 effort. The Hornets' winning performance moved them from second to first in the standings with four events remaining in the meet.

For the boys, Burlington won its second straight title. The Red Devils squeaked by Wakefield Memorial with a narrow 39.5-37-point decision. Northampton was third with 24 points. Burlington collected 32 of its points with runner-up placements in four relays - the sprint medley (3:38.54), distance medley (11:01.41), 4x50y shuttle hurdle (28.74) and the long jump (17.45 meters).
"We over-performed in most of our events today and that's rare in relays," said Burlington coach Matt Carr. "I talked about relays never going the way you expect it to go. It usually goes worse than you expect it to - somebody stumbles, turns an ankle, you got to redo your entire lineup from top to bottom. But we were really on today. I am stunned.I really am stunned."

Wakefield captured the boys' 4x800-meter relay, taking the lead with 2.5 laps remaining and never looking back. The Warriors finished with a time of 8 minutes, 25.55 seconds. Pentucket was second at 8:32.01. Early-race leader Triton Regional was third at 8:33.19.

Northampton collected 10 points with a victory in the boys' sprint medley relay, combining for a time of 3:35.94. Burlington was second at 3:38.94. Finishing third with a 3:40.69 clocking was Old Rochester.