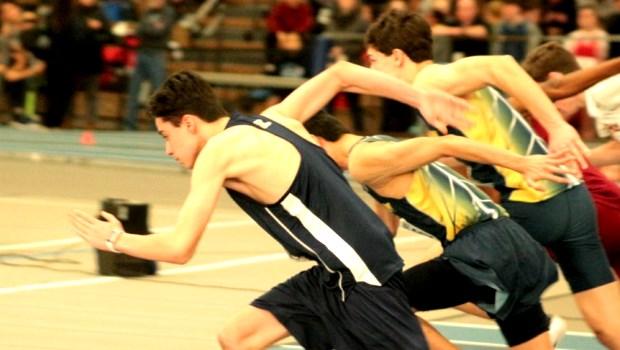 Even though he had the distinction of being the top seed at Saturday's MSTCA Freshmen-Sophomore Large School Meet, Tyler Brogan wasn't worried about where he was a the beginning of the one-mile run. The Franklin High sophomore's No. 1 concern was at the end.

With a blistering final lap, the end  for Brogan was a convincing victory and big-time PR! The Panther standout smashed the meet record by three seconds with a final time of 4 minutes, 26.75 seconds. Newton North's Ian Horsbugh was a distant second at 4:30.47.

"I had a plan the whole time because I knew there were a lot of good runners in the field -  to stay near the front the whole time," said Brogan, whose previous best was 4:29. 'The last couple of laps I wanted to really push it to make the others kind of hurt and feel it a little bit. The last lap I just wanted to go bananas, go berserk the last lap."

On a frigid cold Saturday, Brogan was one of several athletes to heat up inside the confines of the Reggie Lewis Athletic Center.

Billerica sophomore Nicole Anderson won the girls' mile. Anderson, who is currently ranked No. 3 in the state, was timed in 5:19.61. She held back in third for most of the race and didn't take the lead until there was a little more than a lap remaining. Cambridge Rindge & Latin's Pheobe Smith was second at 5:21.90.

Hannah Curtin, a freshman from Winchester, captured the girls' 55m dash with a PB of 7.47. Brookline freshman Sarah Schlosberg took second in 7.66 and Hopkinton's Mick Delaney was third in 7.69.

Lowell's Richmond Kwaateng established a meet record in the boys' 55m dash, breaking the tape at 6.54. Kwaateng was well ahead of the field. Finishing second was Tristen Howard of Medford in 6.79. Shepherd Hill's Bryan Santjos was third at 6.80. Kwaateng was a double-winner, also taking the long jump with a distance of 20 feet, 9.75 inches.

A meet record was also set in the boys' 55m hurdles with Nathan Hebert of Central Catholic cruising to a time of 7.97. It was his first time under eight seconds. His previous best was 8.16.  Brockton's Susan Takang was the only hurdler under nine seconds in the girls' race, winning with a time of 8.80.

James Burger of Central Catholic took control in the 1,000m,  virtually leading from the start to finish. He crossed the line in 2:41.71. Needham's Micah Bernat placed second overall with a time of 2:42.72. Finishing third was Lexington's Selvin Backert at 2:43.67.

The girls' high jump was a heated battle between North Andover's Sarah Lavery and Hingham's Lila Belsher. Both cleared 5-4 with Belsher taking the title on fewer misses. Wachusett's Maddy Carroll was third with a leap of 4-10. In the boys' high jump, Newton South's Danny Collins won by four inches with a height of six-feet even.

The top four finishers in the girls' long jump were separated by just an inch. Sharon's Jada Johnson claimed the crown with a distance of 16-11.75. Milford's Kerry O'Connor (second, 16-11.50), Bridgewater-Raynham's Tiarra Deveaux (third, 16-11.25) and Taunton's Victoria Gravel (fourth, 16-10.75) occupied the next three placements.