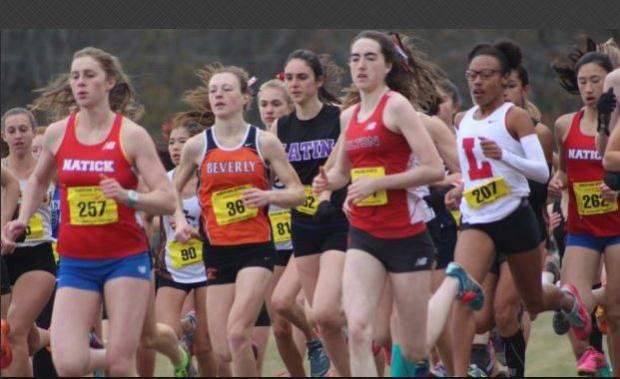 It was twice as nice for Grace Connolly at Saturday's MIAA All State Championships.

The Natick High junior made quick work of her competition and cruised to her second straight individual title, covering the 5K course at the Wrentham Developmental Center in a time of 17 minutes, 50.18 seconds. Connolly was hoping to break the 2012 course record of 17:27.40 by former Peabody standout Catarina Rocha, but the slippery conditions due to Friday's rainfall made footing difficult on the rolling, dirt trails.

Finishing second overall was Wellesley's Margaret Donahue with a time of 18:07.53. Milton's Bridget Mitchell placed third at 18:08.39. In the team competition, Concord-Carlise provided a mild upset by taking the plaque with a 116-122 win over second-place Wellesley.

St. John's Prep's Tristan Shelgren beat a stacked field to capture the Division 1 boys' title. Eventual second-place finisher Andrew Mah (15:37.94), took the pace out hard after the first mile, passed in 4:45. Shelgren pulled alongside Mah by the midway point and took the lead for good just after two miles. Finishing third overall was Brookline's Lucas Aramburu in 15:45.86. Arlington's Ryan Oosting, one of the top contenders, finished sixth overall in 15:59.41. It was reported that Oosting had been battling a sickness all week and was not 100 percent at the starting line. Pre-meet favorite Saint John's claimed the school's first state title, defeating runner-up Lowell, 81-104.

Sam Acquaviva of Newburport broke the tape in the Division 2 boys' race, finishing with a time of 15:58.81. Placing second was Westwood's Zach Conant with a time of 16:07.77. Nico Agosta led Parker Charter to its school first-ever team crown, by placing third overall in 16:09.30.

Parker Charter slipped by Pentucket, 90-95, to take the top prize. Acquaviva's individual triumph was the fourth time in the last six years that a Newburyport runner has won at the All States. Last year, Jack Carleo was the first across the line. His older brother, Nick Carleo, won in 2013 and 2014.

Littleton's Sarah Roffman got it all right in her first season of cross-country by winning the Division 2 girls' race with a time of 18:12.40. Nauset Regional's Madaket Nobili placed second at 18:26.98. Manchester Essex's Eve Feuerbach placed third in 18:28.73. Mount Greylock took the team title with an 87-125 decision over Nauset Regional.