During the early part of the summer, MileSplit MA will feature what we consider the best performances of the outdoor track & field season. This was an arduous task to undertake as there were an abundance of fine efforts turned in by our Bay Staters throughout this spring campaign. Without further adieu... 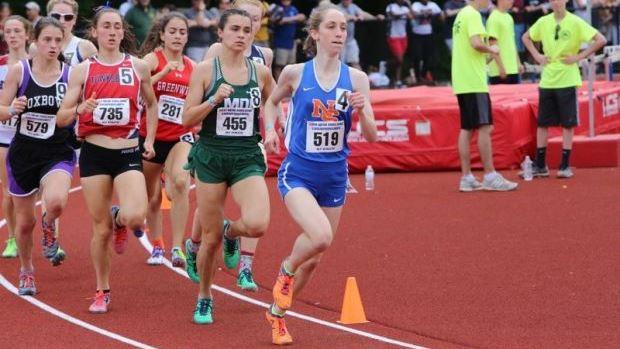 The Newton South senior finished off her outstanding high school career in style this spring with a number of national-level performances. It all began in early May at the Weston Twilight Invitational when the Princeton commit established a new state mark in the 2,000-meter steeplechase with a time of 6:46.63. Martin would show her range with an impressive 10:27.63 two mile at the South Shore Principals Twilight Meet three weeks later.  Among other efforts was a sub 4:50 mile at the MIAA All State Meet where she clocked 4:48.88 for the four-lapper and a third-place finish in the 800m at the prestigious Glenn B. Loucks Games in New York.

But the event we list as the most memorable was a race she actually didn't win. In perhaps the most loaded 800m race in the history of the New England Championships, Martin finished second to individual champion Kristie Schoffield of Merrimack Valley (NH), with an all-time best of 2:07.91. In all, seven runners ran a time of 2:11 or faster. As she often does, Martin made sure the race was honest by leading the pack through an opening 400m of 63 seconds. She maintained her edge until just 100m remaining when Schoffield kicked past her rival and won with a time of 2:06.90. Schoffield, the NH state champion and Loucks Games winner, would later finish as a runner-up in her specialty at the elite Brooks PR Invitational in Seattle.