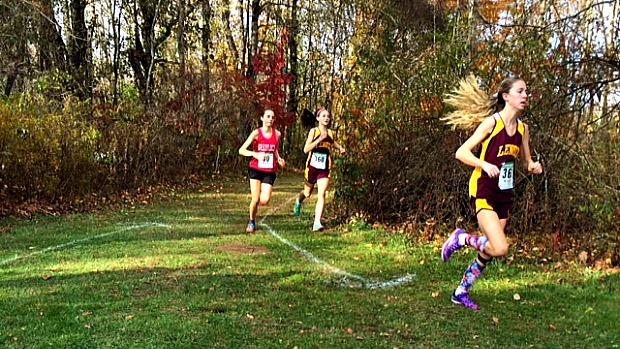 On a beautiful day for running in the Berkshire Hills of Western Massachusetts, with the last of the leaves clinging to the trees, two teams continued their strong hold of the Berkshire County Cross Country scene. The defending league champion Lenox girls and the defending Western Mass boys of Mount Greylock ran away with the county meet championships. Both teams scored victories with scores normal of regular season dual meets not of league championships.

The Lenox girls completed their second straight undefeated season by winning easily with a score of 19 despite the absence of last year's league MVP Emma Jourdain who sat out the race to rest for the upcoming Western Mass and State meets. Emily Tibbets lead the way for the Millionaires with a break out race, besting the field to win the meet in a time of 18:33. Tibbets, last year's Western Massachusetts champion was at her season best when it mattered most. The race began with Tibbetts and Sorrentino, both of Lenox, and Margo Smith, the Mount Greylock freshman standout and newly crowned league MVP, running together at the first mile. Tibbets took over the race as it entered the woods for a second time extending to a small lead that she never relinquished. Smith would come home in second in 18:41 just 8 seconds behind. The Lenox maroon and gold wave swamped the field as another freshman Maggie Sorrentino, new record holder in the Bob McIntyre Twi-Light Meet freshman race held last week in Falmouth, finished third at 18:55. Lenox would then take the next four out of five spots. Alice Najimy (20:50) was fourth followed by 2 more Lenox freshman Tate Morrison and Marion Huth in fifth and sixth with identical times of 21:25. Grace Phair of Monument Mountain would break up the Lenox runners in seventh with a time of 21:26 and Lenox Senior Grace Ellrodt (21:34) took the eight spot. Jamie Barthe (21:42) of Hoosac Valley finished ninth and Hannah Flynn (21:47) of Monument Mountain rounded out the top 10. Wahconah runner Gabrielle Orlando (21:48) lead her team in eleventh while Pittsfield high was led by Taylor Maddalena (22:10) in eighteenth. In all Lenox placed 7 runners in the top 20 as Elizabeth Jarck (22:23) finished twentieth. Mount Greylock runners would place 6 of their own in the top 20 with Emily Lescarbeau twelfth, Ellie Williams (21:59) fourteenth, Emma Polumbo (22:00) fifteenth, Isabelle Bote (22:020 sixteenth and Anya Sheldon (22:050 seventeenth. Mount Greylock finished second with a score of 59 and Monument Mountain was third at 75 points.

In the Girls JV Race Helen Greenfield of Mount Greylock won in a time of 21:48. The Lenox girls JV team was equally dominant as their varsity counterparts placing seven in the top ten, providing evidence that Lenox may be the team to beat for years to come. 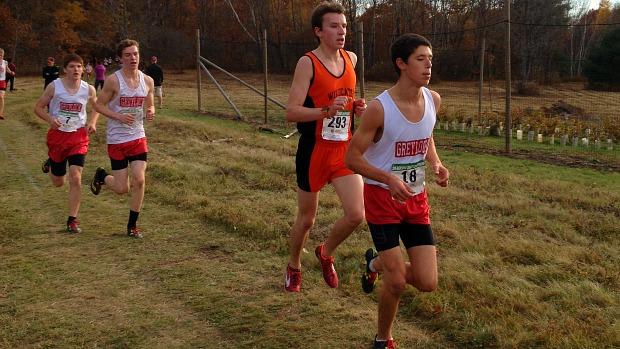 In the Boys race, Mount Greylock 's Tommy Kirby capped of his MVP Season with a commanding twenty nine second win while leading his team to an incredibly low team total of just seventeen points. The Greylock boys placed all seven of their runners in the top 12. Kirby took command of the race right from the start. Drury's Connor Meehan tried to match Kirby in the early part of the first mile but Kirby was too strong and ran away from Meehan and the rest of the field. Kirby finished in a time of 16:36 and was followed by teammate Evan Arthur at 17:05. Meehan place third in 17:28 and Hoosac's Jared Haley was fourth, 17:47. It was a Greylock runner again in fifth as Jacob Fink finished in 17:49. Sam Harding of Lee, one of the first members of a lee squad that restarted cross country at the school three years ago, had a career best day finishing in sixth place, 17:53. After Harding the Greylock boys capped of their dominate day by taking the next 3 spots. Cameron Castonguay was seventh (17:56) followed by Sam Culver (18:03) in eighth and Owen Brandriss (18:12) in ninth. Lenox was passed by runners Raphael Bruno (18:17) in tenth and Connor MicNinch (18:17) in eleventh. It was the seventh and final Greylock runner Jesse Seid (18:20) finishing in twelfth. Pittsfield would then take the next 3 spots with Noah Casino (18:23) thirteenth, Greg Fournier (18:29) in fourteenth and Kevin Raynor (18:32) in fifteenth. Taconic was represented in the top twenty by Mohammad Jadallah (18:32) in sixteenth, Owen Fitzgerald (18:42) in eighteenth and Ryan Serre (18:58) in twentieth. Wahconah's Jaryd Massaro (18:46) finished in nineteenth. Greylock won the meet with the 17 point total followed by Pittsfield with 63 and Taconic at 78 points.

The Boys JV race was again a show of force by the Greylock boys. Josh Cheung of Greylock won the race in 18:32 seconds which would have been good for sixteenth place in the varsity race. Greylock boys placed 5 in the top 10.