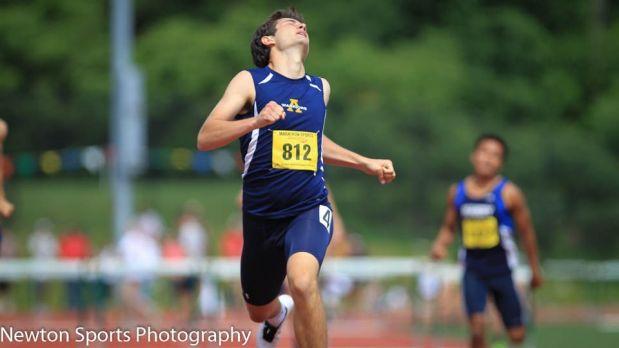 The Andover team starting out in dominating fashion, as the 1-2 hurdle duo of Sean Caveney and Sebastian Silveira gave the Warriors a quick 18 Points. Caveney ran 55.01, while Silveira was clocked in at 55.89. 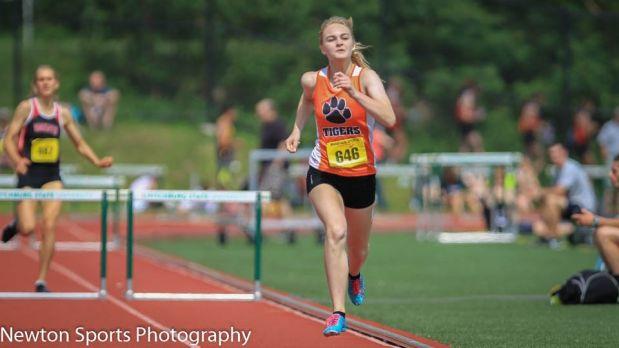 Taunton Jessica Maki was the fastest 400M Hurdler by nearly two seconds. The Senior ran 1:02.53 finishing ahead of Hannah McNeil of King Philip. McNeil's time was 1:04.09. 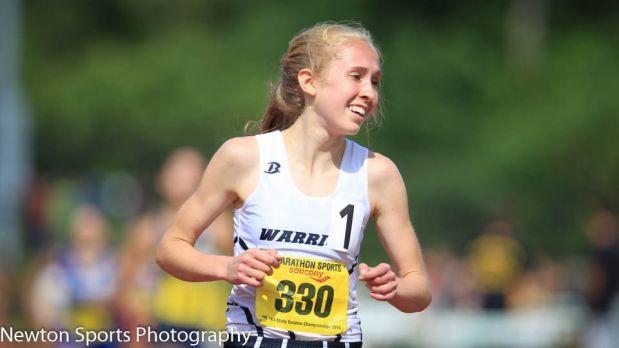 . The Lincoln Sudbury 4x800 Relay team helped their superstar runner Ariel Keklak accomplish an amazing double. The L-S 4x800 squad gave the anchor leg such a commanding lead, that she was able to put the pedal on cruise control. Keklak, a junior, ran a controlled 2:15 split as the L-S team ran 9:19 for the victory. Keklak followed that with a strategic 4:53.82 win the the 1 Mile run. 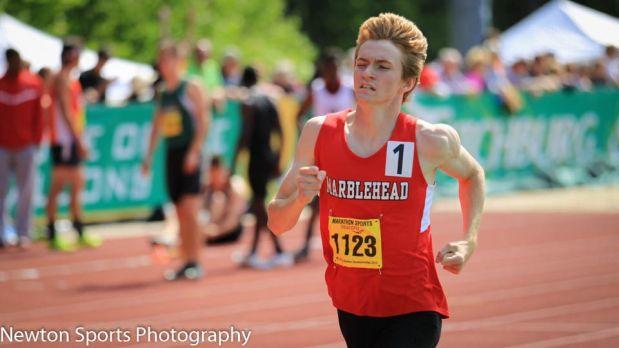 The boys mile was missing a few of the top ranked kids in the Northeast, but that didn't stop Andrew Ernst of Marblehead from putting on a show. The Junior ran away with the race at the 3/4 mark and hit the tape 4:15.85. Ernst was second place in the same race in 2104. 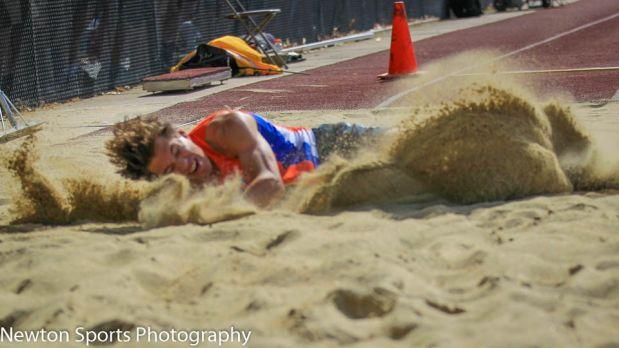 Anthony DeNitto of Newton South edged out rival Kevin Saccone from Old Rochester in the Long Jump. DeNitto was marked at 22-5.25". Saccone was the defending All State Champion. 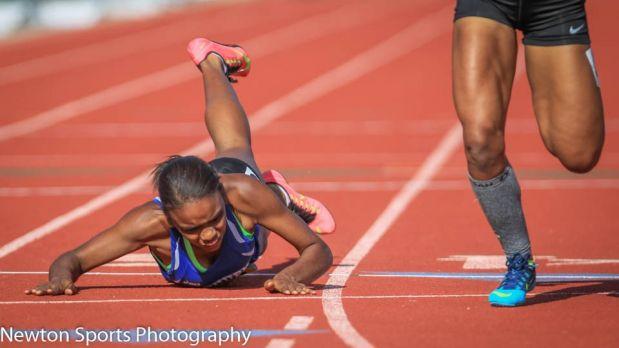 The girls 200M run offered won of the most dramatic finishes of the day, as Wileshka Samuel of Methuen fell across the line. Her fall came up short of first place as Brooke-Lynne Williams continued her dominating season and captured the All State title. Williams time was 24.93 and her rival was clocked at 24.97. 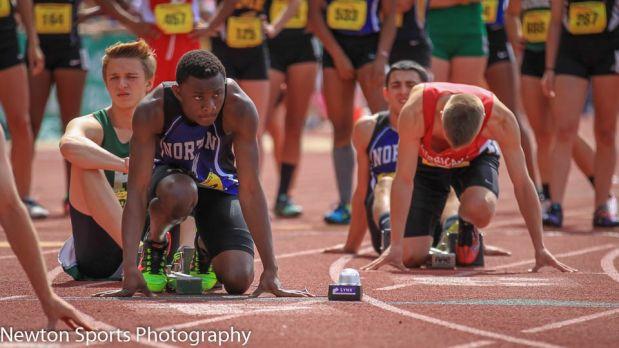 In the above photo, Abu Ceesay of Norton is being aided by a portable light. The light flashes as the starter's pistol is fired, which has helped the Junior from Norton immensely. Cessay who is hearing impaired, helped his team win the Division 4 Championship title last Wednesday. 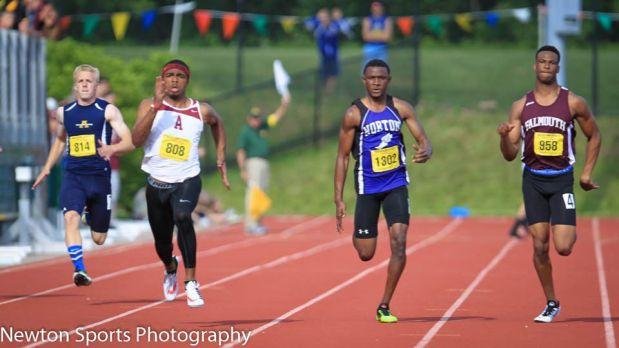 The Boys 200M run featured a match up between Taj-Amir Torres of Amherst, Ceesay of Norton, and Falmouth's Craig Green. Green had the fastest time coming out of the trials, but in the end it was Torres finishing first place with a time of 21.40. Green has been bothered by a leg injury all season long , and he seemed to pull up short in the 200M Final yesterday in Fitchburg. 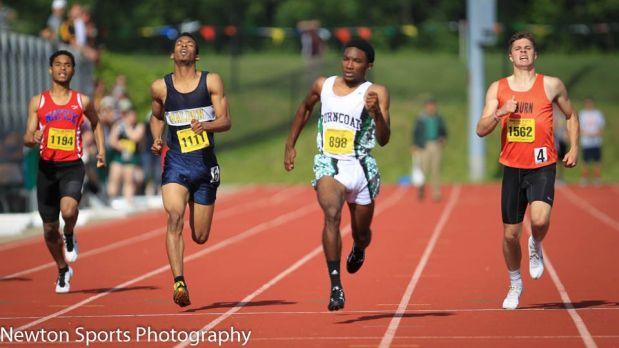 One of the closest races of the day was the boys 400M run as three runners broke the 49 Second barrier. Rodney Agyare-May of Burncoat held on in the last five meters to win over Bishop Feehan's Anthony Delasanta (not in the photo, he was in lane 1). Defending Champion Chris Jewett of Woburn was fourth place. 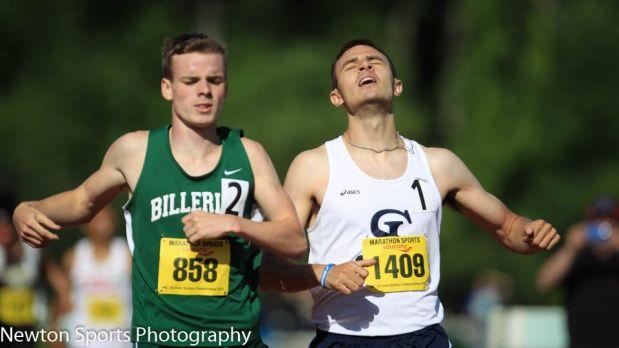 The Boys 800M run was another classic duel between P.J Garmon of Billerica and Joe Luongo of St. John's Prep. This time it was Garmon that won the photo finish. Garmon's time was 1:52.72. 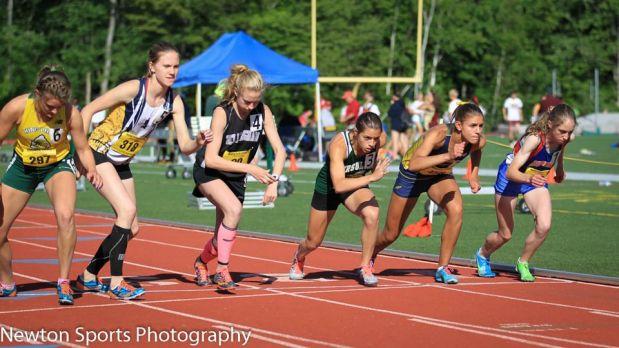 Clare Martin of Newton South lived up to her top seed position as she equalled her 2:10 clocking from last week. Martin ran away from the field early and held off a charging Sarah Edwards of Bellingham. Amy Piccolo of Ursuline Academy was third in 2:12.13. 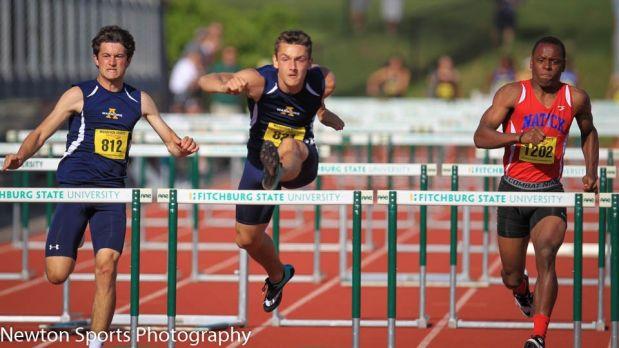 The Andover Hurdler finished three in the Top 8 places. Sebastian Silveira captured the title in 14.21, and teammate Sean Caveney was 3rd in 14.47. Andrew Matteucci of Andover was 8th place. The Andover hurdler will be on display at the New Balance Nationals in a few weeks. The defending Indoor National shuttle hurdle champions, will be looking to challenge for an outdoor title in North Carolina. 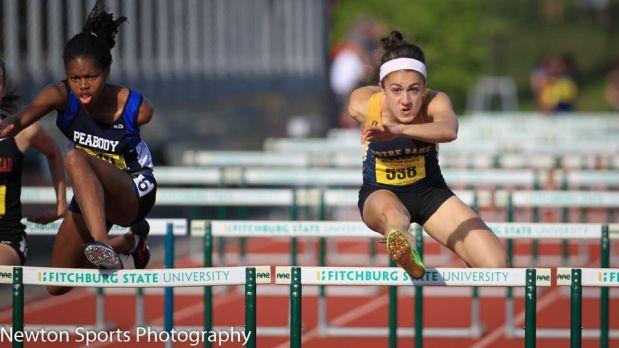 Isabella DiMare capped her stellar career by winning another All State title in the 100M Hurdles. DiMare ran 14.90 to win over Cynthia Aroke of Peabody. 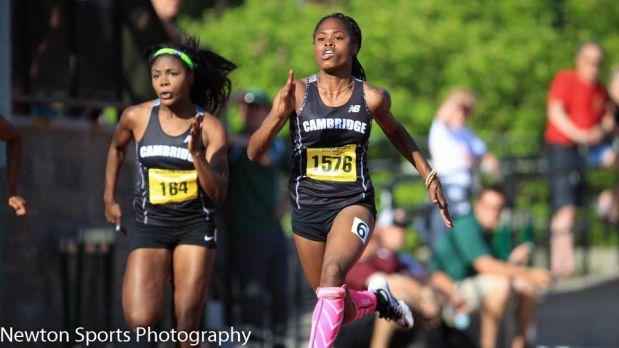 Brianna Duncan of Cambridge became the first athlete to win three individual titles. She won the 100M dash (11.97), the Long Jump (18'8.75), and the Triple Jump (38-6"). Her 30 points was enough points to win the All State title by herself. Her teammates added another 21 points to give Cambridge the team title. 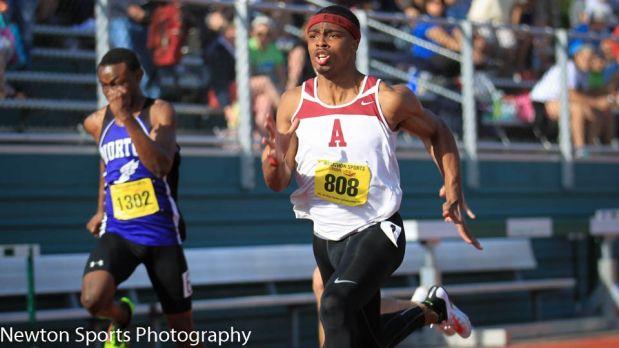 Taj Amir-Torres was on fire yesterday, as he won the 100M, 200M, and anchored the winning 4x400M relay team to victory. 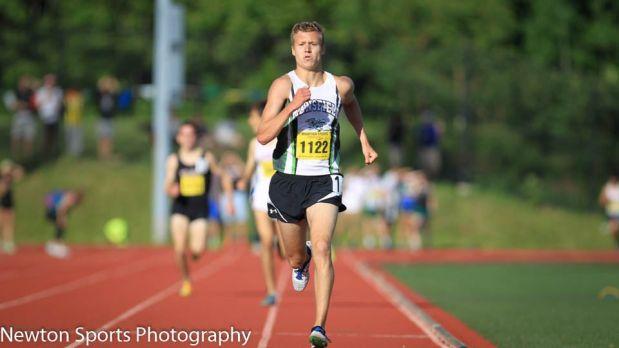 Mansfield High Senior Dan Romano capped off his fine career with a 9:21.59 victory in the 2 Mile run. 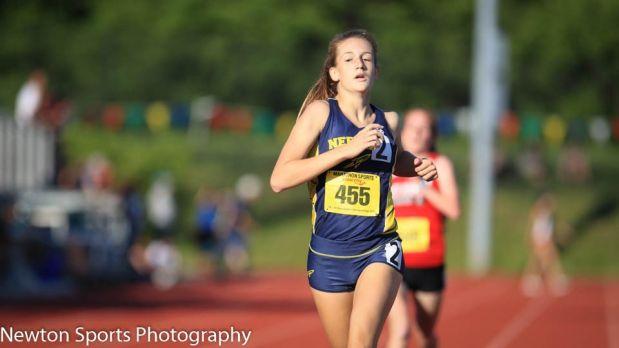 Margie Cullen of Needham held off a surging Emily Bryson in the 100M to take a victory in the two mile run. Cullen's times was a personal best of 10:41.42. 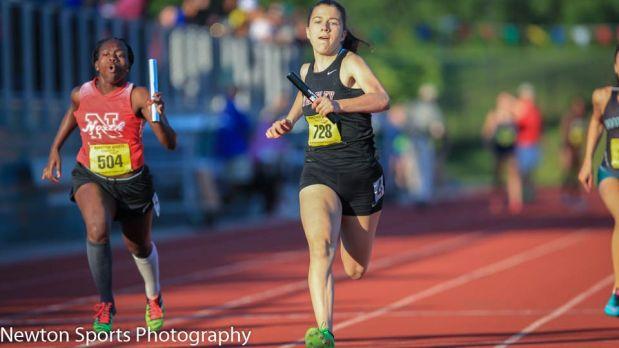 Ally Isley anchored her Wellesley team to victory. The Raiders were 5th place in the same event in 2014. 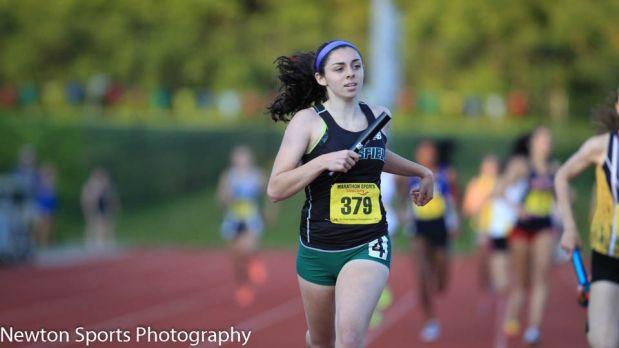 Mikaila Amerantes helped the Hornets of Mansfield capture another 4x400M title. Last year they broke the State Record in the 4x400M with a time of 3:50.14. Yesterday at Fitchburg State University they were clocked in 3:57.33. 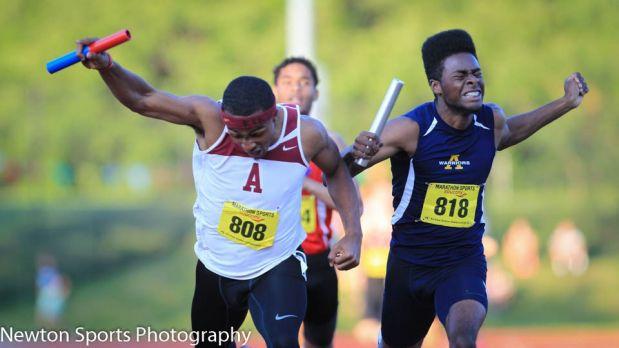 These two runners have given us some fantastic finish line photos individually. When we put them together this is what they gave us. Torres came from way back to capture Andovers Hamza Naveed. Torres split was sub 48, while Hamza ran 49.2. 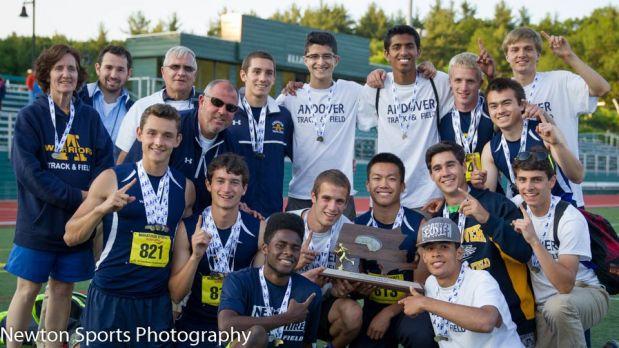 Nobody was going to outpoint the Warriors of Andover. Coach Peter Comeau put together a dominating team that scored 100 points in the Division 1 State meet, followed by a 62 point performance at yesterdays All State Meet. Amherst Pelham finished 2nd place behind a big day from Taz Amir Torres. 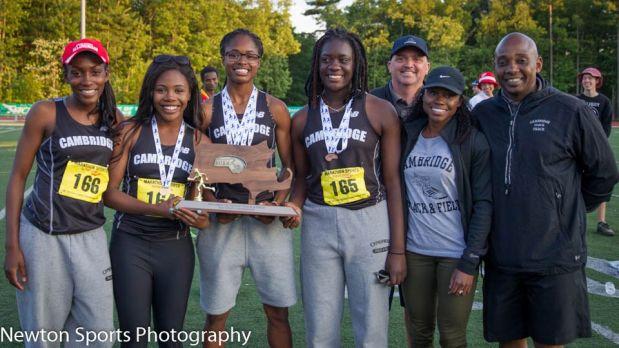 Brianna Duncan was enough by herself to win this title, but Coaches Scott Cody and Jamahl Prince had plenty of other support as the team gathered 51 points. Norton High School finished second with 24 points.