There are several reasons why Saturday’s New Balance Indoor Grand Prix at the Reggie Lewis Athletic Center is a must-see event for track & field enthusiasts.

After already setting two American records (5K, two mile) in Boston the last few weeks, Galen Rupp will be making his third visit to Beantown this weekend when he attempts a possible third U.S. mark against a talented field in the mile run. Mary Cain and Ajee Wilson should also electrify the crowd when the two teenage phenoms go toe-to-toe in the 1,000-meter run.  There will also be a stacked 4x800 squad from the Brooks Beast T.C - one that includes IAAF World Championships silver-medalists Nick Symmonds - that will have their eyes on a world record on the fast, banked oval. 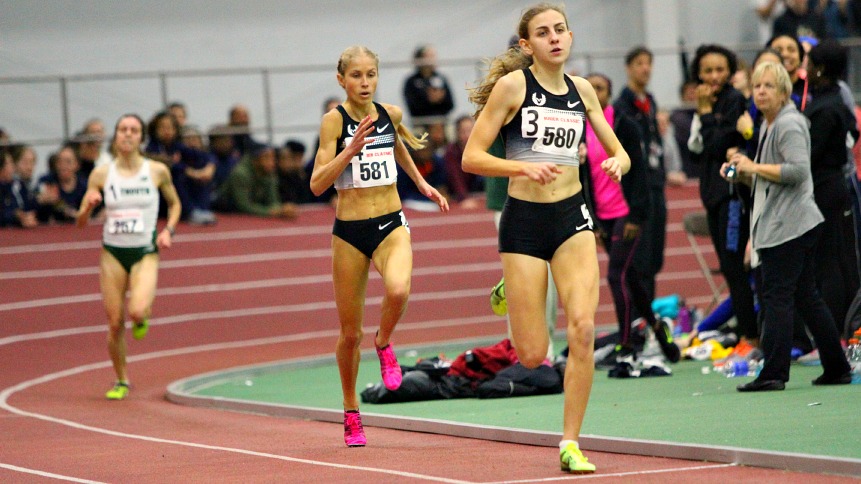 A strong opening act for those highly-anticipated races will occur about an hour after the doors have opened for the world-class meet. Some of the best high school stars from the region (and beyond) have been invited to compete in the Junior Mile. With the quality of the fields that have been assembled, no doubt the two races should excite the fans.

The host state will have its share of standout athletes capable of earning the top prize in the boys’ race, scheduled for 3:58 p.m. Five of the 12 runners in the field hail from the Bay State. Three of those runners, Middlesex School senior Garrett O’Toole, Newburyport junior Nick Carleo and Newton North senior Gabe Montague are among the top six on MileSplit’s national rankings for the mile.

The remaining two from Massachusetts – Burlington senior Paul Hogan and Newton North senior Mike Schlichting – are deserving of a spot on the line. Less than two weeks ago, Hogan won the two mile at the MSTCA Elite Meet with a time of 9:11.7 (US #4). He also has a best of 4:20 for the mile. Schlichting ran 4:17.98 at a Bay State Conference meet on Jan. 23 and has clocked 9:19.65 for two miles.

Montague and Carleo have the fastest times this year among all participants with both runners clocking 4 minutes, 15.82 seconds. Montague achieved his time by winning the Boston Holiday Classic in late December and Carleo had his best at a Boston University Mini Meet on Jan. 4 where he was a few strides ahead of O’Toole, who crossed the line at 4:16.10.

Certainly a runner capable of taking the race out hard and continuing to the finish is Pocatello (IA) junior Elijah Armstrong. On Jan. 24, Armstrong was a double-winner at the Johnsons Invitational where he copped the two mile in a nation best of 9:08.0 and also won the mile at 4:16.02, currently No. 5 in the rankings. Armstrong, a sixth-place finisher at the Foot Locker Cross-Country Nationals, has run the 5K in 14:28.75. He also has best for the mile at 4:15.35 and 3:56.91 for the 1,500, both achieved during the spring of last year. 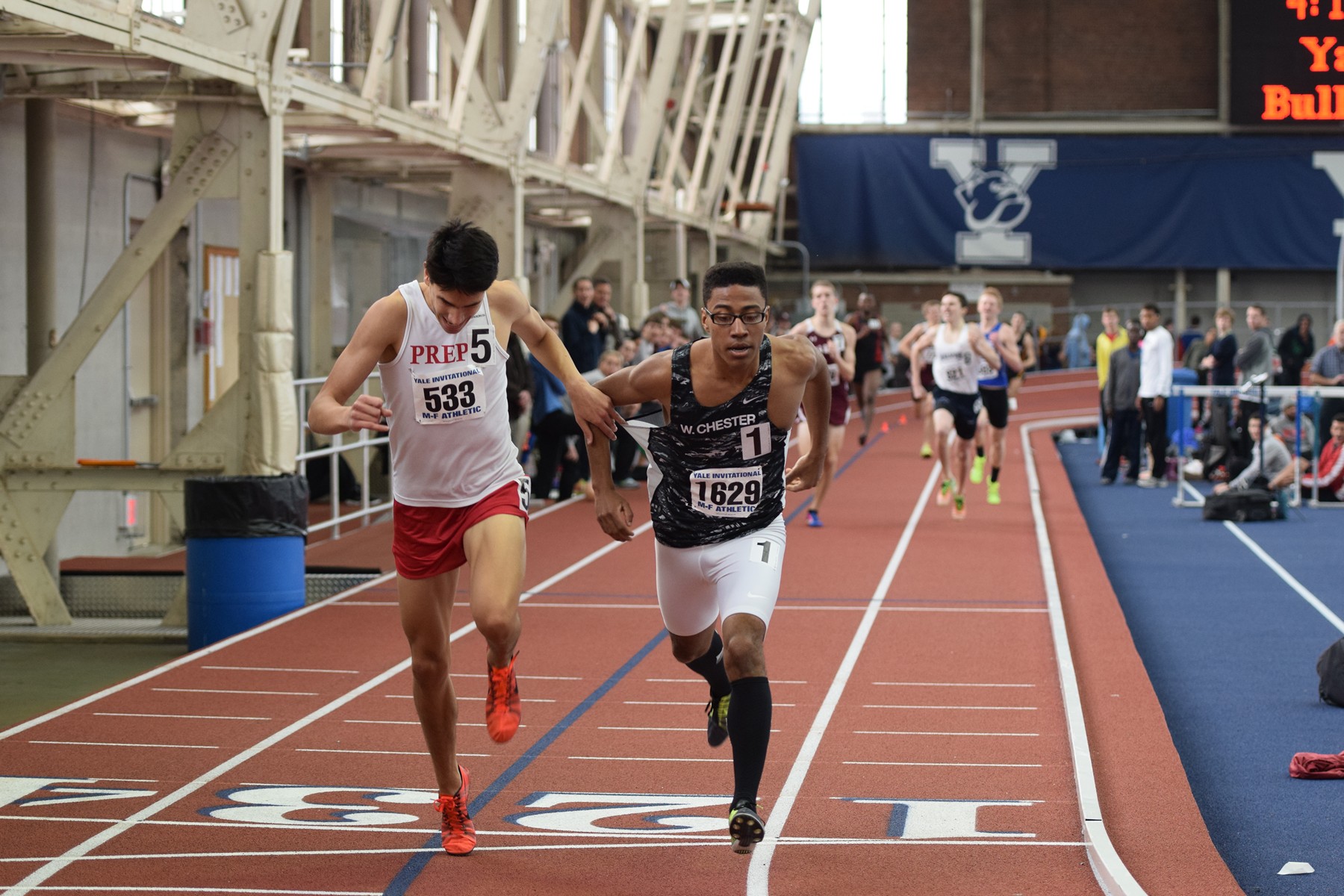 Charles Cooper, a member of the McGill Olympic Club, is the only non U.S. runner in the field. The Canadian has run the 1,500 in the low four-minute range.

The girls’ race (4:08 p.m.) features a number of runners that are capable of a time in the low 4:50-range, perhaps even faster.  Griswold (IA) junior Rebekah Tophan owns the fastest time in the 12-runner field with a 4:48.66 best, a clocking she attained on an over-sized track at the Brooks PR Invitational in Seattle last February. This will be the Iowa state cross-country champion’s first major race of the winter. She has run 2:10 for the 800 and a few weeks ago won the mile at the Jayhawk Indoor Open with a season best of 5:07.18.

Nearby Rhode Island will have two of their top runners in the race, this year’s Dartmouth Relay mile titlist, sophomore Eliza Rego of La Salle Academy, and three-time All American, senior Maddy Berkson of Classical. Rego has the capability to run “sub-five” at Reggie Lewis. She ran 5:02 at Dartmouth and recorded a PB of 4:37 for the 1,500 at last year’s outdoor state meet. 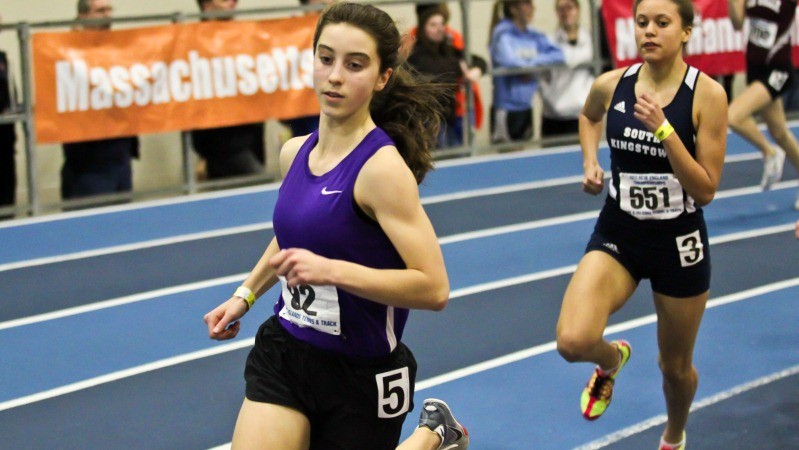 Berkson appears to be the favorite to snare the crown. The Stanford-bound star, who finished third in the 800 at the indoor and outdoor nationals in 2013, has posted some fast times this season in multiple races. She is No. 1 on the national list in the 600 with her winning 1:32.96 at the New Balance Games.

Berkson also has run 9:47.35 for the 3K (US #3) and cracked five minutes for the mile at the start of the season with a 4:59.07 at the R.I. Classic in late December. She ran her PB of 4:50.50 for the mile at the Brooks PR meet last year. She also has had some success at Reggie Lewis where she is the two-time defending New England champion in the 1,000.

New Hampshire will also have two entries in Saturday’s race – Coe Brown Academy junior Hannah Parker and Exeter junior Shannon Murdock. Parker has a PB of 4:59.24 for 1,600 meters and ran a sizzling time of 2:06.42 for the 800 to win the New England Outdoor Championships last spring. Murdock, a runner-up at Dartmouth (5:02.88), captured the 1,500 at the N.H. Indoor Track & Field Championships with a PB of 4:36.79.

Ryen Frazier, sister of multiple national champion and last year’s Grand Prix winner Wesley Frazier, will also be on the starting line. She was fourth in 2013 where she ran her best of 4:59.13.

The host state’s lone entry is Manchester Essex Regional junior Olivia Lantz. She recently finished second in the two mile at the MSTCA Elite Meet and has a best of 4:57.67 for the mile, which she did at the MIAA Auerbach All-State Meet last year.

The Milers of Massachusetts